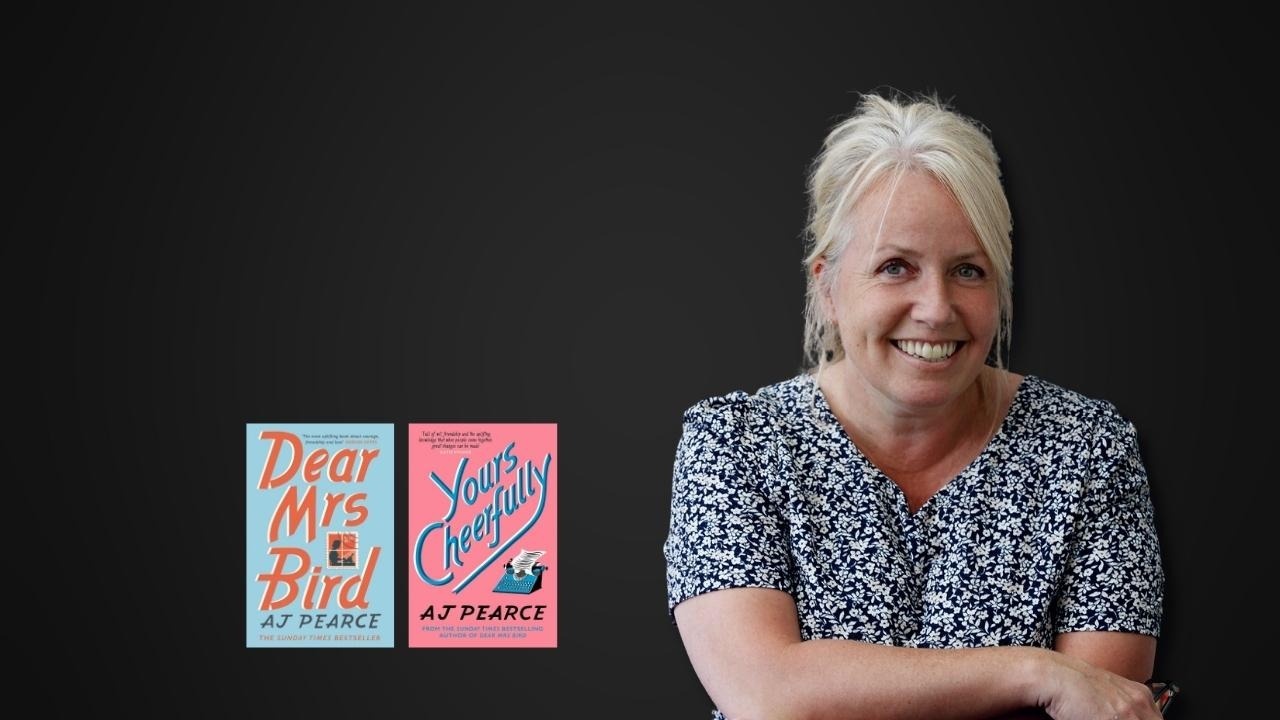 AJ Pearce is the Sunday Times bestselling author of Dear Mrs Bird and Yours Cheerfully, both part of The Emmy Lake Chronicles series. AJ’s novels have been published in more than twenty countries and she is a British Book Awards and Royal Society of Literature Sir Christopher Bland Prize nominee. We're also thrilled that AJ is the sponsor of The AJ Pearce Scholarship on The Octopus Scheme, our scholarship program here at The Novelry.

From the Desk of AJ Pearce.

Writing characters and getting to know them is one of my favourite parts of working on a novel. It’s where I start, where I go back to if I get stuck, and where I know I can have fun.

The better I know my characters, the more real they feel and the easier it is to write for them. Dialogue flows more naturally, their actions feel authentic and push the story forward, and if the storyline does get sticky I know it’s because I’m not writing something good enough for my characters to want to engage.

So, how do you get them to this point?

I hope you might find some of the following thoughts interesting, and if new to you, perhaps worth giving a go.

1. Find out what matters

Finding out what really matters to my characters is at the centre of everything they (and I) do.

What or who do they love? What are their triggers, their vulnerabilities, the things they believe in or cherish the most? If I know that, then I can try to write a story that means something to them, and by extension hopefully to my reader.

A while ago I wrote 50,000 words of a novel, increasingly struggling with it until I realised that what I had thought would mean the world to my main character, just didn’t.

Heart in mouth, I stepped away from my laptop and spent a day talking to myself about what and who mattered to her. I looked back at some scenes and saw that one in particular had been easier to write than the others. When I looked at that, I realised I’d been focussing on the wrong thing. I switched to what I knew she was passionate about, and a new and far better storyline fell into place.

The thing was, I hadn’t been listening to her. I should have known better! I’ve spent years working with this character as part of a series and I know her really well. When I went back to what I know means the most to her, things made sense. I knew then, I could write her novel.

What or who do they love? What are their triggers, their vulnerabilities, the things they believe in or cherish the most?
— AJ Pearce

2. Spend time with them

There’s never a quick fix here. Just like meeting someone in real life, it takes time to know them. Yes, you can nail down hair colour and their favourite food on the first ‘date’, but unless you’re really lucky, it takes time to see the real them.

I use the mundane parts of my day – housework, travelling, walking – any time I’m alone and don’t have to think about what I’m doing. Then I can just let myself daydream. If you don’t get much time to yourself, the time between hitting the pillow and falling asleep, or even for five minutes when you wake up, can be great for this, too.

Allow yourself to escape the real world and give your character something to do. Play with a piece of plot and see how they handle it. Don’t put any pressure on yourself to write it down. Even if you forget the details, their attitude and gut responses will stay with you.

You’re just getting to know each other.

The antagonist in my first book is Henrietta Bird – a formidable advice columnist who doesn’t really like people. I had great fun one morning, walking my dog and making up her one-sentence opinions on each of the last ten British Prime Ministers.

Did it have anything to do with the story? No. Did it make me laugh? Absolutely! More to the point, when I wrote her dialogue I knew Mrs Bird’s voice. I’d heard her crush a Head of State in a few words – it was easy to imagine how she would speak to her staff.

Writing novels is incredibly hard. We all deserve to take the pressure off when we can, and just play. Get your characters to cheer you up, or let them stir up how much you loathe them. Then it’s in your head when you need it.

I rarely go into long descriptions about what people look like. I’ll try to set an impression, but once again, I only include one or two things that matter to them.

As well as painting a picture, add something that you know matters to the character and I bet it will help direct how they behave.  I’m not too bothered if a character is six feet two with green eyes, but if being six feet two makes them miserable, or they hate that their eyes are the spitting image of their dad’s, then for me, that’s worth putting in.

Clarence the postboy in Dear Mrs Bird is fifteen and in the throes of a paralysing crush. He’s five feet ten with unpredictable skin, and his voice can cover three octaves in as many words. I don’t think I mention much else about his appearance, but these are the things that matter to him and make him the person he currently is. One day he’ll have grown out of them and while they will have shaped him, I’ll find something more that he can hold dear.

I rarely go into long descriptions about what people look like. I’ll try to set an impression, but I only include one or two things that matter to them.
— AJ Pearce

This is another area where the pressure is off and you can have some fun. I enjoy that it’s just me making up stuff and getting to know the characters. I don’t write any of it down – just like I don’t make notes on people I meet in real life. (That would be weird). You can trust that the details that make an impression will stay with you.

For the heroine of my series The Emmy Lake Chronicles I needed to know why she is driven to support the women who write into the magazine she works at, and why she thinks she is qualified to help. Emmy is only twenty-two in the novel so I spent a long time thinking about her family history – understanding why her parents are the people they are, and how that has affected her.

I wanted influences that would form the basis of Em’s strong belief that everyone has the right to be heard, together with her confidence to think she can help them. To get that, I picked her father from solid, upper-middle-class stock, while her mother is from a far more politically motivated, bohemian family. Once I had that, I had a foundation for why and how she is who she is.

Digging deep into Emmy’s family helped me get to know and understand her. It also gave me several other characters almost without me actually noticing I’d done the work. I definitely recommend that!

One of my favourite characters to write – Mr Collins – is a senior editor who works in a dark, untidy office. It’s rammed full of papers, books and spilled ink which obviously gives an immediate impression of the sort of person he is.

More interesting though, is that there’s a half-empty bottle of brandy on his bookshelf. It’s a hint to his back story and it matters enormously to him. It’s also something he won’t talk about, so I don’t either. I leave other characters in the novel (as well as the reader) to make their own assumptions. One day they may become close enough to him to find out. But not yet.

You don’t have to explain everything – in real life most of the time we don’t know everything about the people around us.
— AJ Pearce

There’s a risk that this may make me sound a bit odd, but actually owning something that belongs to a character in my novel is often a tangible way to make them feel more real to me.

I have a pair of vintage 1940s shoes that Emmy wears in Dear Mrs Bird. She walks through the rubble of The Blitz in them, and having worn them, I know they are entirely practical for the job. I also have a silver notebook and card case that she uses in my current WIP. As soon as I saw them online I knew which character would have given them to her and what it said about them as much as her. It may not even make the final draft, but it’s part of my understanding.

If you don’t want your house full of imaginary people’s belongings (which is probably the saner approach), photos also do the job well. I wanted something to represent the arrogant Mr Terry in Yours Cheerfully so searched online for a period ashtray to put on his desk. I spotted an expensive, ostentatious, art deco Rolls Royce ashtray which was spot on. He no more owns a Rolls Royce than I do, but it was perfect for showing how he would try to associate himself with wealth and success. I don’t have to tell the reader that Emmy thinks he’s an idiot – through that object he’s doing it all for himself.

If you haven’t already tried some of the ideas above, I hope they may be useful. It’s not a must-have checklist, and for me there are no set timeframes or rules, but they’re in the toolbox when I need them, or if I’m stuck on a train or can’t get to sleep.

Occasionally, I get lucky and ‘see’ a more minor character straight away, and of course, they all continue to develop as I’m writing the book. But certainly for the main characters, I love spending time with them off the page, knowing that time is always well spent.

Sometimes I have conversations with readers which, if overheard, probably sound as if we’re talking about people who are real. When that happens I can almost hear the characters joining in with us in my head. After all the time I’ve spent with them, that’s the best thing of all.

Apply for a fully-funded scholarship place on our Novel Course kindly co-sponsored by AJ Pearce. Full details about The Octopus Scheme is on our Scholarships page.

AJ Pearce joins us for a live session with our members on May 2nd at 6pm UTC. With membership at The Novelry you'll enjoy a varied calendar of guest Q&As, writing classes and workshops. Membership is included with our famous creative writing courses. Sign up now to finish the book you've always wanted to write.