‘Playing’ as children, is partially a rehearsal for growing older, for trying on lives. As children, we put on the clothes -  the ties and high heels - of our parents and try them for size. We try out situations too. I love the video clip above from the hit reality TV series - The Secret Life of 5-Year-Olds.

It’s an interesting age, says Dr Laverne Antrobus, one of the psychologist-commentator-spies on the TV show: “They are going through a phase of experimentation, trying on different identities, to see which one fits.”

Some lovely soundbites from the show:

“I want to be a vet Monday, Tuesday, Wednesday, Thursday and Friday and the Queen Saturday and Sunday.”

“When I grow up, I want to be a jelly maker, a pencil sharpener… a toy maker”

With a romance blossoming in the treehouse, five year olds Sienna and Arthur play 'mums and dads' in one episode. Sienna wants him to kiss her but Arthur claims he “has to go to work”.

If 5-year-olds experiment with adult roles, It’s the other way round for writers.

In The Secret Life of 45-Year-Olds, writers discover the portal back to our original selves. Writing novels is a lightning reversal of the ageing process. The inner child is back, with a vengeance.

At 5 years old, I had 27 dolls and teddies lined up in my bed such that there were barely covers enough for me. Over the coming years, I assigned parts to them obvious in their given names; ‘Depressed Bear’,  ‘Gay Bear.’ There was always a baddie, usually the authority figure, in my case a middle-aged, bald female nurse doll was who cruel in her treatment of the teddies. They were putty in her spiteful hands. I had to remain vigilant, the Uber-mother in a vicious world controlled by a fascist doll.

Yet, where there was wickedness, there was plot. When a story stalled, in came the Nurse with the medicine.

As I approached teenage years, a collection of Sindy and Barbie dolls lived out Dallas-inspired fantasies with one male doll enjoying a harem of female dolls, with American accents. There was backstabbing between the plastic women folk day in day out. It was more than just a nuisance for me to tear myself away from them. I couldn’t bear to think what the worst of them, Sindy Lou, with her narcissistic tendencies would do to the others, particularly Paul, while I was gone. In the world I created, women were on top, but ruthlessly conniving to stay so. My mother was amused between vacuuming rounds to find Sindy-Ann astride the smoothly castrated permanently bewildered Paul, whilst Sindy Lou was out shopping.

Then, one day, it all stopped. Something died. The dolls lay lifeless in their Sindy house, they were just dolls. I started to look in the mirror, rather than to look at them.

I turned to music, then by the time I was fifteen to diaries and thence to poems. I never thought I could be a writer, however. I thought it best I become some sort of long-haired businessman, a Sindy Lou, to stay on top. After all, I didn’t fancy vacuuming and if I couldn’t ‘play’ anymore, then I had to stave off housewife drudgery at the least.

This week I have enjoyed reading Wendy Jones’ biography of Grayson Perry 'Portrait of the Artist As a Young Girl' who recounts his enforced submission to an unkind step-father, and the need to continue to play almost to ‘cheek’ him, to somehow retain some sort of control of his life. Numerous personalities are needed for games we can’t win ‘straight’. 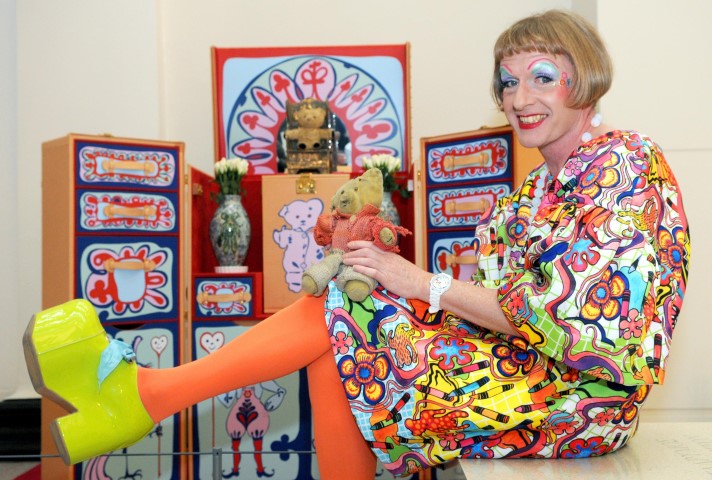 Grayson spent his troubled childhood creating a fantasy life where he fought off the invading Germans, under the command of his teddy bear Alan Measles. Measles was a plucky wartime Resistance leader who became his hero, a sort of personal God and the embodiment of everything that was good about masculinity.

'Alan Measles was the leader, the benign dictator, of my made-up land, the glamorous, raffish, effortlessly handsome, commanding character…Alan Measles was the ultimate male presence. The Germans were the invading force, or at least they were as soon as my stepfather appeared on the scene. Gradually, the Germans occupied Alan Measles’s realm. As the years passed, Alan became more of an underground guerrilla, more a spy. In the beginning, it had been open warfare, whereas towards the end it was subterfuge… As I was growing up I progressively bestowed all my noble masculine traits of a high achiever, a winner, a lover even, on to my teddy bear for safe-keeping. He was the guardian, the custodian of these qualities. I lived in Alan Measles’s realm, carrying it around with me like a comfy sleeping bag I could pop into at any time… I no longer had separate games, they were all facets of the one game: everything was linked.'

‘I was still playing the game enthusiastically until I was fifteen. Then one day some of my brother's toy cars were lying around in the lounge, I tried to play with them but I couldn't, I'd lost the ability. I wondered, 'Is this what it's like being an adult?’

This sentence made me very sad.

They say, don’t they, 'we will tell you when you’re older'. We think the thing they will tell us might be exciting, sex or life after death, God lives next door etc. It’s not. It’s that when you get there, there’s nothing to say. Except, be quiet, get a mortgage, pay the bills.

But some people, the people who said 'fuck this for a game of soldiers' at a tender age, maintain that playful middle finger to the grown-up world. When Grayson Perry won the Turner Prize for his ceramics in 2003, he was wearing a Little Bo Peep outfit.

“It’s about time a transvestite potter won this prize,” he quipped.

Three cheers for transvestite men, the glorious male apostasy that has done as much for female equality as anything to my mind.

Besides defying the drudgery of real life by cross-dressing, there is novel writing of course. As the idea of cross-dressing as a man would bore the tits off me, I suppose if I wanted to live another kind of life, it had to be the latter.

If I’m honest, I’ll always put playing first. The first thing I want to do when I get up, every day, is to play. When I leap out of bed, it’s to resume the game in which I have complete control and experience absolute freedom. I’m known for writing dark comedic novels. Well, laughing at your own jokes is a cute enough, harmless, kind of fun.

I do resent those who get in the way of me playing - usually male figures of authority. 'The anti-play patriarchy'. I’m prepared to be not a wife, not a girlfriend, not a successful professional career woman, so long as I am left alone to play.

Of course, now I have my own children and I must provide for them and for myself a home, playtime is limited. The hour ends. But I'm determined to give myself that one hour, and that's what I suggest to writers on our novel writing course  at The Novelry. One hour a day - play.