Katherine Arden on Resilience for Writers 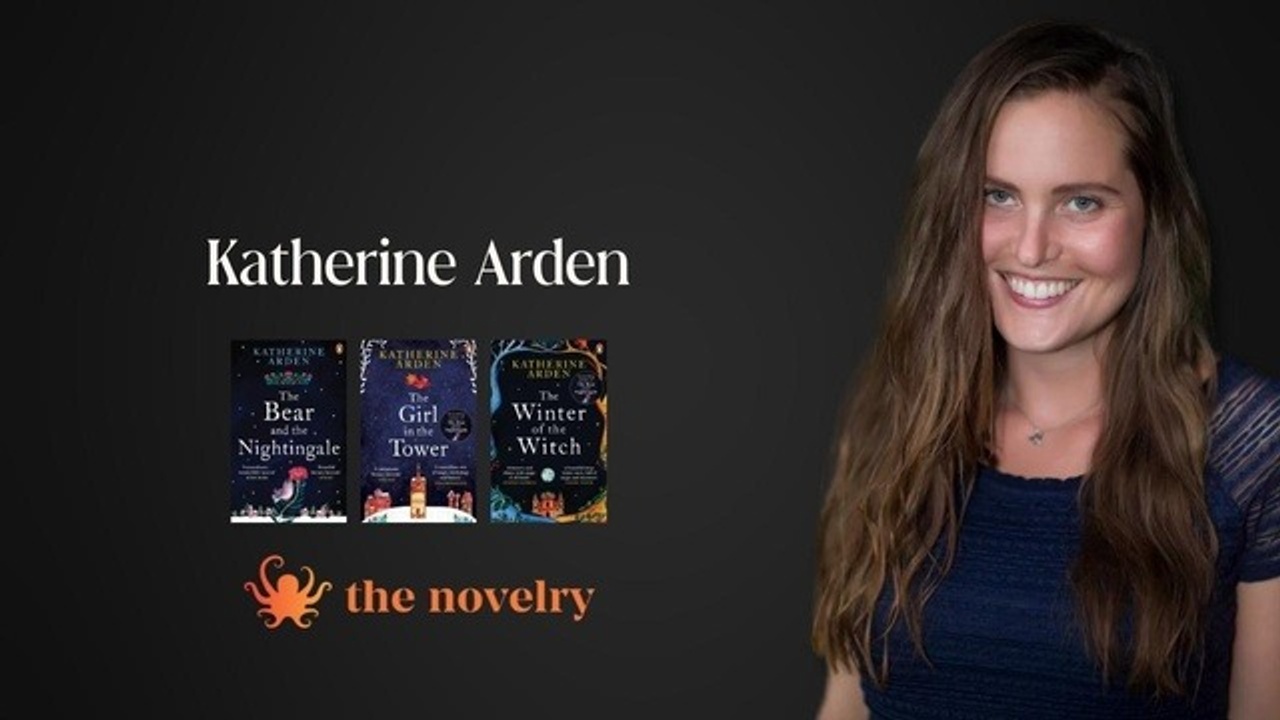 Katherine Arden is the author of the Winternight trilogy that begins with The Bear and the Nightingale, "a wonderfully layered novel of family and the harsh wonders of deep winter magic" (Robin Hobb). Katherine joins us at The Novelry for a special live Q&A with our members on February 21st.

Here, Katherine tells us about the resilience needed to become an author, how she wrote her debut novel in a tent, and how you can surprise yourself with your writing.

From the desk of Katherine Arden.

When I was sixteen, I tried to write a novel. The main character was named Anred. Anred is an anagram of my last name – you do that kind of thing at sixteen. Anred lived underground on a planet that was half ice. To keep warm, her town was built into the base of an active volcano. Unfortunately the volcano was actually a sleeping dragon, and one day it woke up.

It was about as good as you’d expect for sixteen, which is to say that Anred was me, except cooler, and the dragon, shockingly, could shapeshift into a cute boy. Anred fell in love with dragon-volcano-boy, but he had to stay a dragon-volcano to save her village from freezing. Cue angst.

Anyway. I wrote fifty thousand words of this thing, put it away, and went off to college, where I wrote no fiction – didn’t think of writing fiction – for six years. I didn’t think I was going to be a novelist. I didn’t think I could make a living at it, frankly. There were plenty of other things I knew I could do. Writing books is hard.

People often come up and ask, did you know? Have you always known you were a writer? Were your childhood essays pieces of brilliance? Is it your calling?

No, of course not. It’s my job, and I love it. It’s not a mythical process. I also wanted to be an interpreter, a linguist, or a landscape gardener.

I’ve seen people advise aspiring writers that unless your writing is a desperate compulsion, unless your book is a wild thing trying to break free, you shouldn’t be writing. That’s silly. There are as many kinds of writers as there are books. Ninety percent of writing is work. Extremely hard work. Not inspiration, not compulsion, not the power of the soul, or whatever. It’s work.

For a long time, I didn’t think that work was for me, and I was okay with that.

Ninety percent of writing is work. Extremely hard work. Not inspiration, not compulsion, not the power of the soul, or whatever. It’s work.
Katherine Arden

In college, I majored in foreign languages – French and Russian. I formed an ambition to be an interpreter. Or a linguist. I loved languages.

But life surprises you, and I think a well-lived life is one where you allow your life to surprise you. I had gone to college in Vermont, with long stretches abroad in Moscow. After five years, I was tired of freezing. So I decided to take six months off before applying to grad schools and live somewhere that wasn’t cold. I decided to go to Maui, Hawaii, where I lived in a tent and picked coffee on a farm.

Picking coffee is a boring and overcaffeinated sort of job and so I, bored for the first time in forever, started making up stories in my head.

I would like to pause here and defend boredom. There is nothing better for a creative person. I know that boredom doesn’t just happen to you in 2022. It must be sought, cherished. But try. Because when the outside stimuli stop, your mind – that springtide of everything you’ve read, and everyone you’ve met, all your thoughts, hopes, dreams, ambitions, the endless ocean of yourself – rushes in to fill the gap. That is where your stories are.

I was in Maui in the summer of 2011, and boredom was a little easier to come by back then. I didn’t have a smartphone. I didn’t have a laptop. I had a pen, a notebook, and the Pacific Ocean on the horizon. Absent much else to do, I started writing one of my stories down.

Boredom must be sought, cherished. Because when the outside stimuli stop, your mind rushes in to fill the gap.
Katherine Arden

People ask me all the time, how do you do it? How do you write a book? And the only answer I have is I don’t really know. It’s different for everyone. You may surprise yourself. Just don’t give up. It’s work. It’s so much work.

When I started writing the book that became my debut, The Bear and the Nightingale, I had very little idea of what I was doing. The unfinished woes of Anred nearly seven years prior weren’t really a guide. Fortunately, I had no expectations of myself. That is a good thing.

In fact, that is an important thing, and a feeling I have struggled to recapture ever since. The part of me – and I suspect, the part of you – that writes novels is like a child. Bright, eager, sensitive, a little random. Expectations, pressure, deadlines – all those grown-up, professional things – frighten the child. They make us awkward and tentative.

But in 2011, there were no expectations, and so I wrote. I wrote good paragraphs and awful paragraphs, blithely. The story brought me joy. It carried me with unexpected power. I wanted to know how the story ended. After three months scribbling in my sandy notebook, I knew I didn’t want to abandon it, like Anred, mid-angst.

So I made a decision. One of the hardest of my life. I delayed everything. Grad school, the real job, the real life. I decided to finish my book.

I was twenty-four and I don’t think there’s a parent in the world who wants to hear that their child has chosen to delay their career to live in a tent on a tropical island, taking odd jobs and writing fiction. I had not gone to school for writing. I had not, frankly, shown a particular aptitude for writing.

This is why I say don’t give up. Because people will ask, why you? Why this story? Are you qualified? Nearly everyone fails. What happens when you fail? You will ask yourself these questions. And the thing is, there isn’t an answer, besides, why not me. Why not this story. No, I’m not qualified. What does it mean to be qualified? I am a human, aren’t I? We are made of stories. I am enough. I have to be enough. Because I am all there is.

This is where I am wary of all the people who ask is writing your calling? Because if you start thinking writing is your ultimate gift, your fate, or whatever, then you won’t have recourse against the days when that feels like the furthest thing from the truth. When you can hardly form a sentence, when your novel is plodding and incoherent. This day will happen to you. It happens to everyone.

You must simply keep going. It’s not about the muse. It’s about the work. You don’t need to believe in yourself all the time. Just go. Just write. Move your fingers. You are enough.

You must simply keep going. It’s not about the muse. It’s about the work. You don’t need to believe in yourself all the time. Just go. Just write. Move your fingers. You are enough.
Katherine Arden

So I stayed on Maui. I kept writing my novel.

I moved out of my tent on the coffee farm, into a yurt on the North Shore. I shared it with another girl. It was the best deal on the island. The bathroom was built on a platform in the woods. It had plumbing – sink, toilet, shower – but no walls or roof. I remember going out at night to pee, getting rained on – it is always raining on the north shore of Maui. I remember the grass sticking to my bare feet, the banana trees rippling as the rain fell. I remember wondering what on earth I was doing.

You don’t always have to know what you are doing. A part of you knows. It does.

I finished my book.

Nothing happened. I couldn’t get an agent interested. I had ideas for a trilogy, but – well, no one was interested. It was crushing. I knew I had to stop. To get on with my life. Can’t live in a yurt forever. I could be a lot of things, I knew. An interpreter, like I’d meant to be.

It hurt, though. Because I spent three years writing my first book, and waiting for someone to notice it, and in those three years, I’d realized I really enjoyed writing fiction. I’d nurtured this tiny dream of being a writer.

But I was realistic. I got a better job, doing marketing for a real-estate office. I planned to get a realtor’s license. I would work for a bit, save money. And then go to grad school.

And I guess that’s the final lesson. When you are truly at the end, when you’ve tried your best, and done what you could, sometimes the world steps in and surprises you. And it did. Two weeks into my job at the real-estate office, I got the first offer from a publisher for my trilogy. One book became two, two became three. Last month, I turned in number seven. Grad school never happened.

I didn’t expect the way things turned out. But life wanted to surprise me and I let it. I’m happy it did. I said writing is ninety percent work, and it is. But the rest of it is the idea, the passion, the hope, the dream. It’s important to nurture it. And if you do, life just might surprise you.

Good luck, everyone, on your writing journey.

Write your novel with one-to-one personal author coaching on our acclaimed online writing courses. Sign up now to finish the book you've always wanted to write.