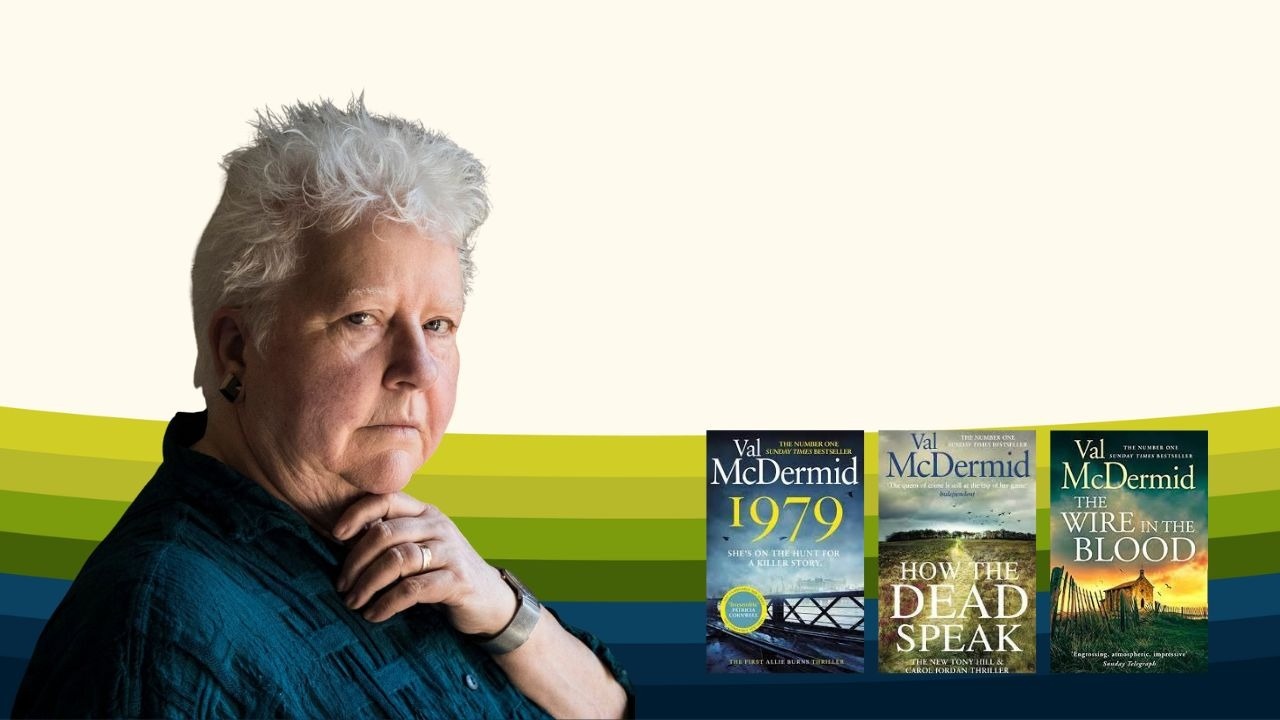 The Queen of Crime, Val McDermid has sold over 17 million books to date across the globe and is translated into more than 40 languages. She is perhaps best known for the scintillating crime stories in the Wire in the Blood series, featuring the ever-interesting characters of Dr Tony Hill (a clinical psychologist) and DCI Carol Jordan. These crime novels were even adapted for a television series starring Robson Green and Hermione Norris.

Val has written three other series of crime novels. One is spearheaded by journalist Lindsay Gordon. Two are electrifying series of detective stories: one with private detective Kate Brannigan; and another, most recently, with cold-case detective Karen Pirie (whose debut appearance in The Distant Echo is soon to become a major ITV series!).

And Val’s experience isn’t limited to the crime genre! As well as the aforementioned series, Val has published award-winning stand-alone novels in the crime fiction genre, as well as books of non-fiction, short story collections and a children’s picture book, My Granny is a Pirate.

In this article penned for the crime writers of The Novelry, Val McDermid explores her process for writing crime fiction and offers advice for other crime writers. She makes the case for how we tell the story being as important as the story itself, particularly in crime writing. Val also offers her ‘pub test’ to help you check whether your crime story is compelling.

Why is the crime genre so popular?

One of the reasons for the popularity of crime fiction is its faithfulness to the idea of narrative and story structure.

Crime novels provide their readers with stories that engage with their hearts and minds, but most of all, stories that make sense.

Applying a narrative to great stories

I’m often asked where my ideas come from, and my answer is that stories are everywhere. Once you train your antennae to hear them and see them, you can’t avoid them.

But a story is only the beginning of the process of producing a novel.

What’s just as important as story is structure – how we tell that story. The stories that satisfy us have a beginning, a middle and an end. But they don’t necessarily come in that order.

Consider a crime novel like a story you tell a friend

This is a piece of advice I love for mystery writers or those working on psychological thrillers, but it can also be really helpful for anyone writing in other genres! Think of how you tell an anecdote in the pub or at work in real life.

Sometimes you begin at the beginning. ‘John picked me up to go fishing this morning.’

Sometimes you begin in the middle. ‘So there we were, out in the middle of the loch, when John suddenly realized he’d left the back door open.’

And sometimes you begin at the end. ‘You’re probably wondering why I’m sitting here in the pub all wet and covered in fish scales.’

Think of how you tell an anecdote in the pub or at work in real life.

One of the questions that come up again and again when I’m working with aspiring writers is, ‘How do I know where to start?’ The answer I usually give is simple. Imagine you’re having a drink with your best friend. Where would you start telling them your story in a way that makes sense?

A crime or mystery novel is malleable

Over the years, the crime novel has proved itself to be extremely nimble when it comes to storytelling.

Of course, there’s a place for the linear narrative that begins at the start of events and continues in a straight line to the end. But not all stories lend themselves to that sort of shape. And one of the toughest struggles we often face is trying to find the structure that allows us to tell the brilliant story niggling away at us.

I know from bitter experience that it can take years.

Probably the longest I’ve struggled with a book before finally cracking it was the twelve years – yes, really, twelve years – it took me to figure out the structure of what became Trick of the Dark.

The crime story sprang from a chance encounter in Oxford one sunny Saturday afternoon in August. By the end of the weekend, I knew who was dead, who had killed them and why. But I couldn’t figure out a way to tell the story that preserved suspense and would induce a reader to persevere, that would grasp the reader‘s attention and keep them reading on for that final clue – the chief task of anyone writing crime fiction.

I wrote the first 10,000 words of that book and tore them up five times before I figured it out. The answer, when it finally came, arose from a change in circumstances in the world around me, not from anything smart that I came up with. It was an object lesson in patience.

A crime novel can benefit from an organic structure

Most structural problems are far less intransigent than that. And although the novel that emerges can seem complex, the route to reach that complexity is often as simple as working out how you’d summarise that story to someone else.

For example, if you get a little way into it, then go, ‘Oh. Wait a minute. Before this next bit makes sense, you have to know this,’ then it’s probably an indication that you need a prologue or a split timeframe.

The key thing is that the structure is ultimately organic; the shape is dictated by the story, not by a single moment where the world of the protagonist is turned upside down.

Approaching exposition in the crime genre

When I was working out the mechanics of The Mermaids Singing, I struggled with how to convey to the reader the events that had happened before my main multiple third-person narrative began.

I could have had my police officers briefing Tony Hill, the psychological profiler. But I thought that lacked immediacy. It told the reader nothing about the impetus behind the killings and it felt very one-dimensional.

Then I hit on the idea of writing the killer’s story from their point of view in the form of a personal record that would be their own way of reliving what they’d done. It never occurred to me that it might be problematic to have two distinct timeframes in the finished novel because it made perfect sense to me. The killer’s first-person narrative begins some considerable time before the third-person narrative but they eventually converge.

Many readers have spoken to me about The Mermaids Singing, but not one person has ever indicated they were confused by the timeline. I learned from that experience to trust that when a story made sense in summary, it would make sense when I’d written it.

Sometimes you have to break the rules of the crime genre

The Mermaids Singing was the first time I struggled with finding a structure that bucked the traditional shape of the detective novel but it was far from the last.

One reviewer of its sequel, The Wire in the Blood, began by complaining it broke all the rules of the crime thriller – by page three, we know who the killer is; we know his target group and his motivations, and not all of the characters we’re invested in make it out the other end. By the end of the review, the critic conceded he’d been completely won over.

Since then, I’ve played fast and loose with the narrative conventions of a crime novel, in books such as A Place of Execution, A Darker Domain and The Vanishing Point. But because it was the only way I could imagine to tell the story, not because my goal was to reach a moment that made the reader gasp.

I’d learned a valuable lesson – let the story be the driver.

Focusing on the shocking moments of plot twists so often distorts a novel, bending it out of shape in a way that either frustrates or disappoints the reader.

Of course, there’s a place on our shelves for the novel that relies on a sudden reversal of fortune. But it’s a tough trick to pull off; it should be only one tool in the storyteller’s kit. It’s much more fun to play with the whole box of tricks!