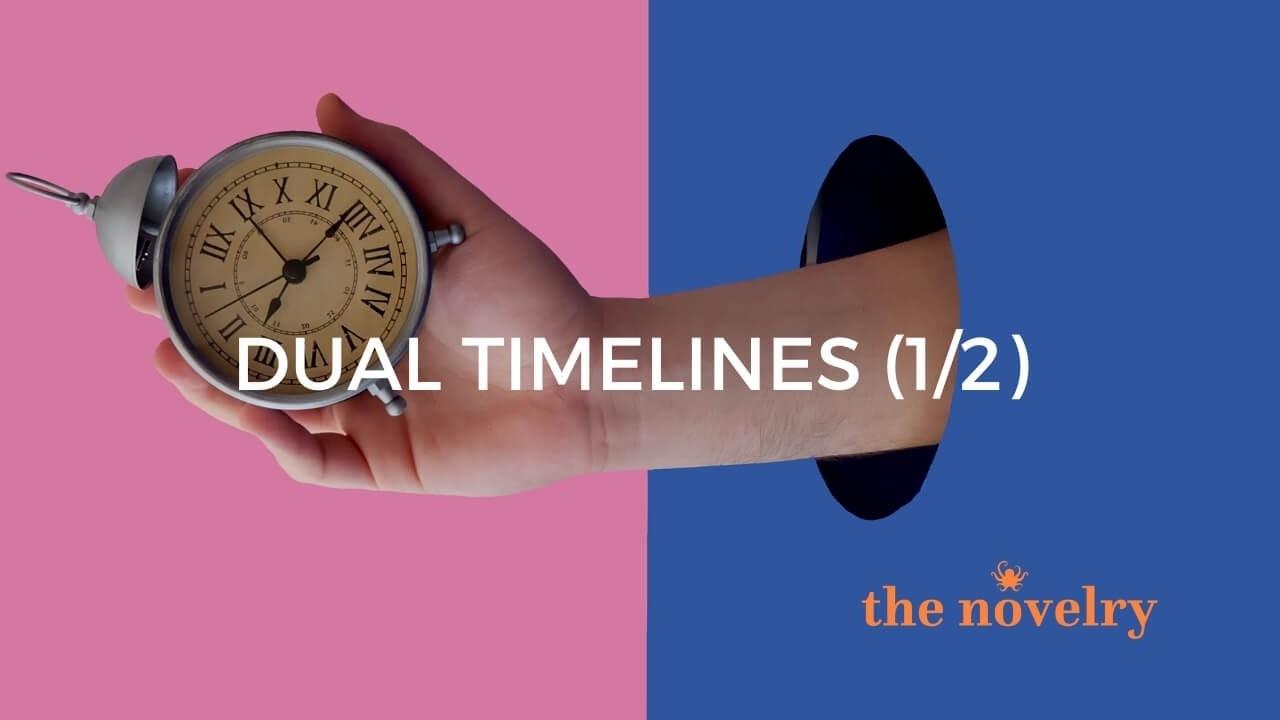 I've worked with dual perspectives before. In my historical novel, This Human Season, I told the story set during The Troubles in Northern Ireland chapter by chapter, alternating between a former English soldier prison guard, and a Catholic mother of one of the prisoners. I wanted to show how the two sides had much in common by running them alongside each other to tell the story of the events leading up to the Hunger Strike. The story came first, and I told it blow by blow, with the timeline in 'real-time' for both parties, day by day. The structure of your novel can serve its theme, it should serve its theme, and it can almost perform the theme.

This time, I'm writing a novel with dual timelines. I didn't mean to, I confess. I had a story drafted out in contemporary 'real-time', told in chronological order, but a character emerged, the grandfather of my hero, and I wanted to show the way our family history weighs on us covertly, from the use of phrases handed down, to an attitude or approach to life. An inherited 'coping strategy'.

This has given me the opportunity to expand the theme of the novel from one person's quest for meaning, to a re-interpretation of what it means to be a 'hero' context and look at the mythology of heroism in the Twentieth Century. In a low brow way.

I'm looking at the person who resists, not through courage but uncertainty, and blithe contentment with what they have, in a 'bubble', and how such inert resistance is not always a bad thing. Call it complacence, call it stoicism. I'm showing how much good the person without ambition can bring to the world. Yes, it's comedic. And I want to show it through the generations of one American family, whereby the original impulse of 'betterment' whimpered and died on Ellis Island in 1896.

I hope I am bringing 'bathos' to the American dream. I guess that's the dance here. I'd love it if Alan Bennett wrote a Western... Not so much The Magnificent Seven as The Modest Seven (with much to be modest about.) In my story there's the same dying fall of bathos from the grandiose to the humble - in a hop (across the pond) a skip (participation in the first American imperial war - the Korean War) to a jump (making model automobiles to avoid noticing you're being robbed.)

As an example of bathos, British darts commentator Sid Waddell was famed for his one-liners, including this example:

“When Alexander of Macedonia was 33, he cried salt tears because there were no more worlds to conquer..... Bristow is only 27.”

It's not easy writing a dual timeline novel; it's heavy lifting. I'm weaving into the novel the story of three generations and pairing content chapter by chapter so that the past amplifies the present. I've structured both stories along the lines of the story structure we teach at The Novelry - The Five F's - and am doing a preliminary draft of insertions. (I had done five drafts of the first story.)  I like what it's bringing to a deeper understanding of the present tense story,  but I'm finding it challenging as the historical story packs more clout, largely as I move across time more boldly, wrought in first person. The second story - the historical family saga - is leading me by the nose, moving ahead of me, and I feel like I'm hanging onto the pram with my knees being grazed on the ground as we go.

I'm going to be spreading that manuscript on the dining room table and examining the connections and cutting with a pair of scissors to ensure one chapter kicks the other right up the backside, and to bring to it the mystery of a few token 'icons' handed down, and catchphrases too, as well as parallel events treated with the same naive and hopeful ineptitude by grandfather and grandson. And yes, I need a linking device, a rationale, and this conceit is that those who love us never leave us, and are present if invisible. A personal Jesus, or a poltergeist.

From my experience, stories happen outwards in ever-increasing circles, draft by draft. I'm a worrier, a dog with a bone. One of my maxims is - if it seems hard, make it harder. What I mean by that is being tough enough to find the single-minded theme, a story elegance, that requires some roughing up of the material, and tough decisions; some junking and cold-shouldering of 'cute' in favour of 'purposeful'.

I certainly never expected to be at first draft at the fifth draft. But when you start asking silly questions, you start getting silly answers. What was life like on a USS naval carrier in 1950? Every week confounds me with another hard question. But I wake to visions of someone watering the lawn of a home that never existed, and she turns and says something, and I ask - who? Who is that? And we're off on another wild goose chase... Expanding and contracting, conjuring and reigning myself in, I revise my plan weekly.

No doubt there are better ways. Most storytelling on TV series drives suspense by featuring dual timeline techniques, as flashbacks or flashforwards. The point is not to let either of the timelines run away from the thread of the story, never to lag so that the reader need not care what happens next, and to ensure the event in one serves the other and the story.

In Vonnegut's multiple timeline novel Slaughterhouse-Five, the cutting is done with a sharp knife. At one point we have Billy Pilgrim about to address an audience of optometrists in 1961 and he opens his mouth to speak, and we're back in 1946.

'Listen, Billy Pilgrim has come unstuck in time.' He is abducted by an alien species, Tralfamadorians, who are able to see all of time. They explain that instead of experiencing the linear progression of time like the rest of humanity, Billy can experience events out of order, and eventually choose parts to relive. (This is  how fiction works!)

‘The most important thing I learned on Tralfamadore was that when a person dies he only appears to die. He is still very much alive in the past, so it is very silly for people to cry at his funeral. All moments, past, present, and future, always have existed, always will exist. The Tralfamadorians can look at all the different moments just the way we can look at a stretch of the Rocky Mountains, for instance. They can see how permanent all the moments are, and they can look at any moment that interests them. It is just an illusion we have here on Earth that one moment follows another one.'

Despite his many attempts to write about Dresden in the twenty-four years between the end of the war and the publication of Slaughterhouse-Five, it was not until very late in the writing process that the novel included so much of what has made it famous, including its shifting chronology, its science fiction tropes in the form of the novel’s alien race (the Tralfamadorians), and its central character, Billy Pilgrim.

The structure served the theme of the novel. It was important to blend events, and create a chaotic (and real) experience of how we consume life in the present on a continuum of the past and the future, memories and projections.

The treatment for the novel is bathos, the heroic reduced to the ridiculous so that the fatalistic theme plays out through story and prose.

'The same general idea appears in The Big Board by Kilgore Trout. The flying saucer creatures who capture Trout’s hero ask him about Darwin. They also ask him about golf.'

Ask yourself, how your structure serves your theme?

In my scheme, the past weighs on the present, all its myths and corners and secrets are there, and sometimes we catch sight of them out of the corner of our eye or in a dream, but the past weighs upon us privately, invisible to the outsider. So my second story, the family saga, no longer the pretender to the throne, must have its sway and bear down upon the present.

What's your structure and why?

Something to discuss with your tutor at The Novelry at your next chat?

Most dual timeline novels depend on diaries or letters. I didn't want to do that! Here are three others which resist that device:

All the Birds Singing - Evie Wyld

Next week, Katie Khan gives us the other side of the story, a rather more elegant approach to creating dual timelines from the outset. See you then, unless you're reading this in the future and wish to read both blogs side by side?