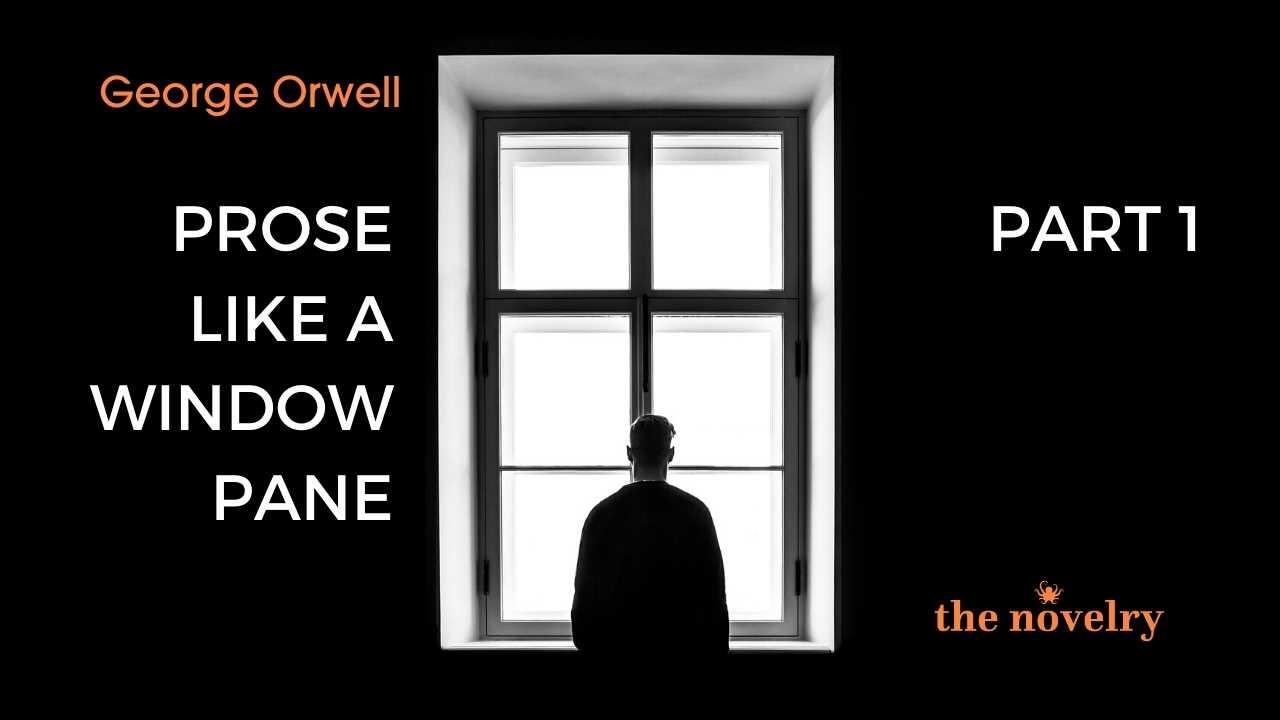 The first of a two-part special on Orwell's own development as a writer to greatness.

How did Orwell make the leap from The Clergyman's Daughter to works like Animal Farm and 1984, from more conventional middle-of-the-road writing, small themes and safe prose to the stark, and bolder books of his last years? To 'prose like a windowpane'?

Write the book only you can write, the book you're meant to write, I counsel writers on our novel writing courses, but how do you locate the book you can write freely and truly and honestly with cleanliness? Let me show you how Orwell, the author of that phrase, found his way.

“I had the lonely child's habit of making up stories and holding conversations with imaginary persons, and I think from the very start my literary ambitions were mixed up with the feeling of being isolated and undervalued. I knew that I had a facility with words and a power of facing unpleasant facts, and I felt that this created a sort of private world in which I could get my own back for my failure in everyday life.” George Orwell, Why I Write. 1946.

Before being sent away to school at 8, Eric Blair had a very happy childhood in Henley.

His works included non-fiction and many great essays and short stories and the following novels:

Burmese Days was a scathing account of his time as a police officer in Burma (now Myanmar) 1922-27 and is the work of a young man and splenetic and drawn from his experiences. In a letter from 1946, Orwell said "I dare say it's unfair in some ways and inaccurate in some details, but much of it is simply reporting what I have seen".

A Clergyman's Daughter tells the story of Dorothy Hare, the clergyman's daughter of the title, whose life is turned upside down when she suffers an attack of amnesia. Orwell was never satisfied with it and he left instructions that after his death it was not to be reprinted. In August and September 1931 Orwell spent two months in casual work picking hops in Kent. During this time he lived in a hopper hut like the other pickers, and kept a journal in which "Ginger" and "Deafie" are described. Much of this journal found its way into A Clergyman's Daughter. He started writing A Clergyman's Daughter in mid-January 1934 at his parents house in Southwold and finished it by 3 October 1934. In the case of the private-school system in the England of Orwell's era, he delivers a two-page critique of how capitalism has rendered the school system useless and absurd. Mrs Creevy's primary focus is given rather baldy "It's the fees I'm after," she says, "not developing the children's minds". This is manifested in her overt favouritism towards the "good payers'" children, and in her complete disrespect for the "bad payers'" children. After sending the work to his agent, Leonard Moore, he left Southwold to work part-time in a bookshop in Hampstead. Gollancz published A Clergyman's Daughter on 11 March 1935.

Keep the Aspidistra Flying is set in 1930s London. The main theme is Gordon Comstock's romantic ambition to defy worship of the money-god and the dismal life that results. Orwell wrote the book in 1934 and 1935, when he was living around Hampstead. In August 1935 Orwell moved into a flat in Kentish Town, which he shared with Michael Sayers and Rayner Heppenstall. Over this period he was working on Keep the Aspidistra Flying, and had the two novels, Burmese Days and A Clergyman's Daughter, published. He was 32.

I like Keep the Aspidistra Flying and here we see Orwell more innovatively satirical with his reworking of the famous passage on love in Corinthians replacing love with 'money'. The book expresses his deep desire for freedom from the drudgery of both working for money and to support a wife and family.

“Before, he had fought against the money code, and yet he had clung to his wretched remnant of decency. But now it was precisely from decency that he wanted to escape. He wanted to go down, deep down, into some world where decency no longer mattered; to cut the strings of his self-respect, to submerge himself—to sink, as Rosemary had said. It was all bound up in his mind with the thought of being under ground. He liked to think of the lost people, the under-ground people: tramps, beggars, criminals, prostitutes... He liked to think that beneath the world of money there is that great sluttish underworld where failure and success have no meaning; a sort of kingdom of ghosts where all are equal ... It comforted him somehow to think of the smoke-dim slums of South London sprawling on and on, a huge graceless wilderness where you could lose yourself forever.”

Coming Up for Air was published in June 1939, shortly before the outbreak of war. It combines premonitions of the impending war with images of an idyllic Thames-side Edwardian era childhood. The novel is pessimistic, with its view that speculative builders, commercialism and capitalism are killing the best of rural England, "everything cemented over", and there are great new external threats.

It might be argued, and recent biographer Robert Colls, ventures towards this that Orwell is more of a conservative, even a reactionary than he is a socialist as commonly held, and in my reading of him, I often find someone who rejects the modern and the future in favour of a quainter, more commonly-bonded small-seated parochial past. This might be heretical in literary circles but his parochial-based novels give way to starker cautionary tales, where the only true decency is found in simple small cell relations.

The novel sold three thousand copies, a thousand of which represented a second printing and thus bettered "the dismal response in the bookshops which had met the publication of Homage to Catalonia."  Margery Allingham, in Time and Tide, wrote that her only regret "is that the story was written in the first person. This device, although it has the important virtue of making the narrative clear and easy to read, tends to falsify the character slightly since [Bowling's] uncanny perception where his own feelings are concerned makes him a little less of the ordinary mortal which his behaviour would show him to be." A recent biographer, Michael Shelden, wrote "The one serious defect in the novel is Orwell's attempt to be the voice of his narrator-protagonist. He does not make a convincing middle-aged, overweight, suburban-dwelling, low-brow insurance salesman, and the book is at its best when Orwell is 'out-of-character', speaking in a voice which is recognisably his rather than an imitation of 'Fatty' Bowling's."

The writer John Wain thought the book " not a success in novelistic terms", he considered the novel " a bleaker work than Keep the Aspidistra Flying; in Aspidistra everybody fears the sack, hankers for more money and security, cringes to the boss. But only to the boss at work, the economic boss. When Bowling thinks of the future, he fears not only the ever-present financial insecurity, the endless work, work, work with the gutter only a few steps away; he fears also the new breed of tyrants, the leader and his strong-arm boys." And Wain noted the third region of Bowling's nightmare – " what we have since learnt to call 'the environment'." He places Coming Up For Air alongside Orwell's 1946 essay Some Thoughts on the Common Toad where he had written that, "retaining one's childhood love of such things as trees, fishes, butterflies and – toads, one makes a peaceful and decent future a little more probable". "What makes Coming Up For Air so peculiarly bitter to the taste is that, in addition to calling up the twin spectres of totalitarianism and workless poverty, it also declares the impossibility of 'retaining one's childhood love of such things as trees, fishes, butterflies' – because it postulates a world in which these things are simply not there any more.

So you see, for me, Orwell is rather on side of old England, an almost chivalric bucolic yearning for a rural past. His childhood. (In letters from school he wrote about caterpillars and butterflies, and had a keen interest in ornithology. He enjoyed fishing and shooting rabbits.)

In Coming Up For Air, Orwell was quite literally coming up for air, and in that book he begins to consider his childhood again. "I tell you it was a good time to be alive....The white dusty road stretching out between the chestnut trees, the smell of night-stocks, the green pools under the willows..." In later essays he would recalls 'the greatest joys of childhood.'

'Only by resurrecting our own memories of childhood, Orwell once suggested, can we begin to appreciate how distorted is the average child's view of the world it inhabits.' DJ Taylor; Orwell, a Biography.

Orwell's major leap forwards began with a return to his childhood. More next week.