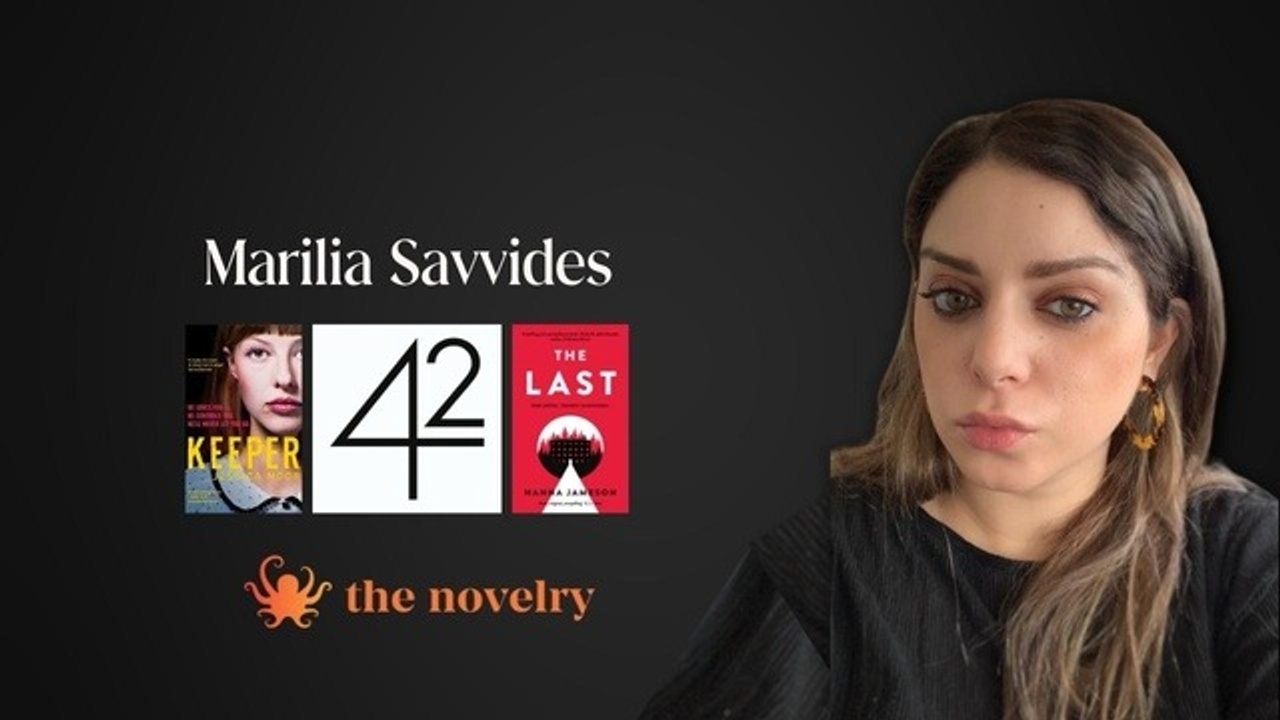 Marilia Savvides is a literary agent in the Books Division at 42, one of our partner literary agencies at The Novelry. A graduate of UCL and the Columbia Publishing Course in New York, and a returning member of the faculty at the Columbia Publishing Course at Oxford University, Marilia spent seven years working at Peters Fraser + Dunlop and joined 42 in early 2020. She was a Bookseller Rising Star in 2018.

Here, Marilia shares her thoughts on perfect first lines and how to write a great first chapter of a novel.

From the desk of Marilia Savvides.

“There are all sorts of theories and ideas about what constitutes a good opening line,” he said. “It’s tricky thing, and tough to talk about…To get scientific about it is a little like trying to catch moonbeams in a jar… There’s one thing I’m sure about. An opening line should invite the reader to begin the story. It should say: Listen. Come in here. You want to know about this.”
Stephen King

As a literary agent, first and foremost, I’m a reader. Sure, we read more than most, but when you boil it down, the truth is agents and editors are just readers at heart. We love books. And like everyone else, we want to be gripped, engaged, invested, obsessed, scared, puzzled and intrigued by the novels we read. We want to be plucked from our lives and transported someplace new. There is no greater joy than the moment you realise you’ve just picked up a book you’re going to fall in love with. The sheer magic of that connection, the growing of the heart, because you’re so excited about the story you’re about to be told; the sadness you already feel because at some point, it’s going to be over. What a gift.

It’s a cliché but that’s because it’s true.

Your job, as the writer, is to cast a spell on us in that first opening chapter. No matter the genre, no matter whether your novel falls into the publishing buzzword categories of commercial or literary or upmarket or some combination of these, the truth remains the same. First chapters need to grab us by the throat or the heart. What they absolutely shouldn’t do is leave us cold, unless it’s with goosebumps and a chill running up our spine.

I write this sitting in the kitchen sink.

The snow in the mountains was melting and Bunny had been dead for several weeks before we came to understand the gravity of our situation.

It was a bright cold day in April, and the clocks were striking thirteen.

You’ve been here before.

First lines are certainly not everything. I’ve read hundreds of novels I’ve adored which began in very simple, straightforward ways. Even unmemorable beginnings can work well, and often they can be preferable to overly written beginnings that are trying too hard to showcase someone’s “writing skills” (more on this later). But we would all be lying if we didn’t admit that, once in a while, an author writes an opening line that is so simple and atmospheric and shocking (1984, The Bell Jar, The Secret History) or so concise and perfectly confident in its voice (I Capture the Castle, Moby Dick) that we immediately want to know more about the story, the narrator, the world we’ve just entered. And that’s when you’ve captured your reader from the very start.

One of the most common mistakes I come across when reading submissions is stuffing that first chapter with too much information. Over-exposition. Some authors feel the need to showcase as much detail as possible about the characters or the world we’re in, or the plot of the book, in that very first chapter. I get it. There’s a natural instinct to pack in as much as possible, the worry being that agents are reading those first chapters, and you want them to get a sense of where the story is going to go. You want to show them your work.  But this isn’t maths, remember. This is magic.

Hold back that panicked voice in your head and allow yourself the freedom to set the scene, the mood, the voice. Reel us in. Too much exposition can kill the drama. Backstory will come later. This is your moment to hook us. We can figure out the other bits later. Trusting your reader to follow you is crucial, but you have to give them a good reason to stick around. Because the worst thing you can do is be boring.

The second most common mistake I see when I’m reading submissions is over writing. Again, authors I think are worried that an agent won’t get to see their beautiful turns of phrase or literary skills in just a handful of pages. They fixate on some of their favourite sentences, the ones they might consider to be profound or especially well-written. The problem is that, often, those beautiful moments have to be sprinkled throughout the book, because that’s where they have the most impact, and because the story must take centre stage. It has to.

And so, if you’re writing from a place of panic, trying to showcase your talent in those first opening scenes with an excessive focus on highlighting your “writing skills” and making that more important than the character or the story, you’re going to lose us. No series of words strung together, however beautiful they might be, will ever be enough to trump or replace the time you are given to grab and hold on to the reader.

Why should we stick around? What story are you going to tell me? Who are we meeting? What’s happening in their lives?

What are the stakes?

Is someone on a flight that’s about to crash? Has a character’s sister just been selected to fight other children to the death in a televised event? Is a woman running away from something or someone we can’t see, deep in the woods? Has someone just been left at the altar? Story begins because something has or is about to change for your main character. It’s often a life interrupted, nudged on to a different path or direction.

Story can only live where a spanner is thrown into whatever that character’s daily life looks like. Always consider what the stakes are.

Can a prologue work?

I personally love a good prologue, especially if it’s a glimpse of what is to come. There’s something about an author dropping us into the middle of the bad thing or the difficult thing, the thing that will come much later, showing you just enough of a peek to grip you, before yanking you away. When done well, and if it’s right for your book, a good prologue can be the answer you’re looking for.

Don't worry so much

The truth is that first chapters are difficult to write. They feel like they’re extremely important (and they are), but they will often change and morph as you write the book. The more you get to know your novel, your characters, where the tension lies, as you unravel those knots, the more secure you’ll feel about where the story actually begins. Often, what ends up being the first chapter in the published novel was not the first chapter originally.

Go back to basics

When in doubt, go back to the basics, by which I mean pick up a bunch of your favourite books and read their opening chapters. Dissect them, analyse them, look at why they felt so real and believable to you. Ideally, focus on opening chapters in the genre you’re writing in and pick your absolute favourites. Why does that opening work so well? When something does work, it’s more of a feeling than anything we can put into a list or a blog post. So when my authors are stuck, I always tell them to go read something stunning (and I do the same if I’m stuck on a particularly tricky edit). Because the most important piece of advice anyone can give you as a writer is that to be a good writer you have to first and foremost be an excellent reader.

I’ll leave you with this brilliant quote:

“A fine balance between confusion, mystery and illumination… It’s a tightrope walk, that first chapter. You want the reader drawn in by mystery but not eaten by the grue of confusion, and so you illuminate a little bit as you go – a flashlight beam on the wall or along the ground, just enough to keep them walking forward and not impaling themselves on a stalagmite.”
Chuck Wendig

Members of The Novelry can enjoy a live Q&A with literary agent Marilia Savvides on Monday, 14th March at 6 pm GMT. Sign up for one of our famous online writing courses which offer personal writer coaching to finish the book you've always wanted to write.