The Driving Force of the Genre 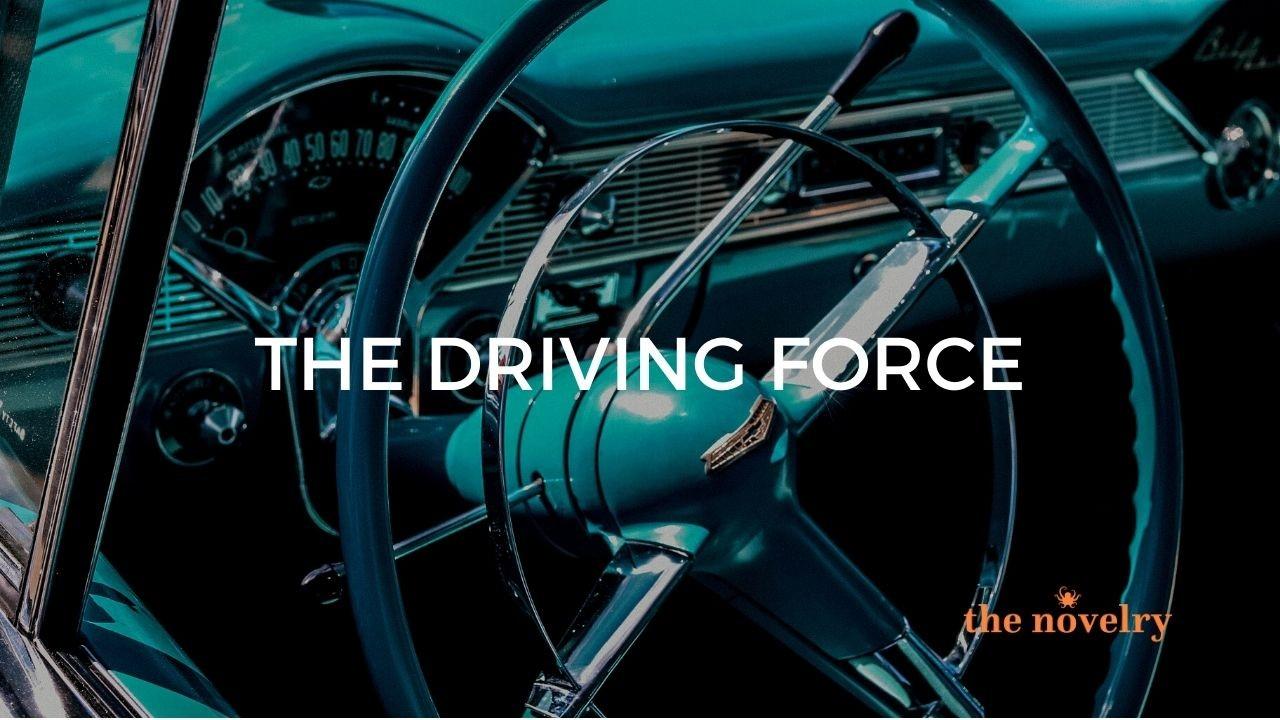 Genre is important. Start here, if you will. It's the first thing an agent assesses on your submissions letter as they start to consider whether to read on and which editor to call for lunch. They'll be looking to check you've used the right ingredients for the genre.

Genre is important. Start here, if you will.

It's the first thing an agent assesses on your submissions letter as they start to consider whether to read on and which editor to call for lunch. They'll be looking to check you've used the right ingredients for the genre.

Genres can be individually defined by the particular nature of the key driving force behind your story.

Each genre has its own secret agent of story, and that's how genres can be defined. Make sure you've got the right one in the driving seat of your moving vehicle! Shall we peel back the disguise? It might be that the commonly held 'drivers' of genre are in fact wearing a mask.

You can find all our hero books here.

An interesting twist on what you might expect at play here. The plot is driven by the 'bad guy' (the rapist) but also the unknowability of 'Mr X' who by dint of 'joint enterprise' apparently assists our heroine in the management of the conflict vis-à-vis 'the bad guy'. The addition of untrustworthy characters gives authors the bonus point of the addition of the adjective 'psychological' to their genre. The first person treatment from the perspective of an unreliable narrator is another key component for +psychological. (+Psychological = unreliability)

The purpose of the antagonist is to reveal the true nature of the hero. (In a psychological thriller, who's good and who's bad is much more up for grabs. How about an antagonist who is a nuisance, but goodly person, who reveals our hero as not so noble... ah, yes, because that's concerned with morality, it's literary. See below.)

Note too that the distinction between Thriller and Crime is that the crime has not yet taken place.

The Godfather by Mario Puzo

And yet, in both of these novels which depend upon the wanton— almost callow — disposability of human life, there is sympathy for the devil. The likeable face of the killer. The Godfather, Don Corleone, and his son Michael, have values. Their values are such that they consider these to be higher purpose than the accident of life. In The Talented Mr Ripley, Tom Ripley has values too.

It’s a classic story of someone who starts off down on his luck and disregarded, but who, through force of personality, hard work and sheer determination, manages to make something of himself. (He is)... polite, self-effacing, hard working. He is endearingly shy in company and worried about the impression he makes on others. He is always assessing himself, always trying to improve. He can do wonderful imitations. He escapes from horrible scrapes with flair and elan. He has a brave taste for adventure, for putting himself in difficult situations and foreign landscapes. Oh, and he is a very good tipper. Good old Tom — what’s not to like? Well, I suppose there is the fact that he is a cold-blooded killer. It isn’t very nice when he batters Greenleaf Jr to death. Truth be told, it’s rather an awkward moment.
Sam Jordison, The Guardian

The driving force here is the likable killer. If you think about it, in all whodunnits, the killer is not the foul-mouthed uncouth swine, but the pleasing, amenable character. And that's not just a device to trick the reader. it's more than that. It's because the likeability of the murderer drives a long-form story more surely than his or her hatefulness. That would be an awfully short story.

Murder on the Orient Express by Agatha Christie

The crime novel was described by Dorothy Sayers as 'the literature of escape.' Sophie Hannah told our writers a few weeks back that its popularity is derived from one of the most fundamental aspects of the meaning of life and a key driving force for staying alive. We don't know what will happen next.

But that's really the milieu of plot, the pedestrian high-street of a crime novel has alleyways out of which anything might jump. That's a given of the genre. I am not sure if it's the driving force.

The driving force of a detective crime novel is the heroism of the detective against the background of a life in which we don't know what will happen next.

In everything that can be called art there is a quality of redemption. It may be pure tragedy, if it is high tragedy, and it may be pity and irony, and it may be the raucous laughter of the strong man. But down these mean streets a man must go who is not himself mean, who is neither tarnished nor afraid. The detective in this kind of story must be such a man. He is the hero, he is everything. He must be a complete man and a common man and yet an unusual man. He must be, to use a rather weathered phrase, a man of honor, by instinct, by inevitability, without thought of it, and certainly without saying it. He must be the best man in his world and a good enough man for any world. (...) If there were enough like him, I think the world would be a very safe place to live in, and yet not too dull to be worth living in.

So, the paradox afoot here is that an unsafe world has as its driving force a safe pair of hands. Try to compose one without this stoic hero? Not possible.

('Cozy' or cosy crime is a sub-genre in which the victim 'deserves' it — a rotten egg — and the sleuth is an amateur.)

The Kite Runner by Khaled Hosseini

An author writing historical fiction is akin to one writing speculative fiction in that they are finding a way to say something about our current condition without writing non-fiction. Historical fiction presents a ready-made world, and is selected as a locale in time and place as much for what is missing as what is there. In other words, the setting allows the author to present a parallel of a current situation in more stark relief. Thus, paradoxically, a historical novel (with the exception of a historical romance) is driven by events or conditions of the present time. An author may have something to say about the ways in which we discriminate and segregate groups, as did Victor Hugo and Margaret Atwood, and has no need to contrive a new or alternative world to present these recurrent themes as a simpler format pre-exists.

Anything is better than the way we live now, says the Sci-Fi writer. As with historical fiction, yet a shriller protest in the sense that sci-fi demands imagining, and enacting, the future now. The author's intention is clairvoyance. What lies ahead of us — beware — a warning shot.

The purpose of a writer is to keep civilization from destroying itself.
Albert Camus

As I mentioned above, a literary novel is concerned with a laser-sharp focus on the moral enterprise of the hero, and how he or she becomes reconciled to their true place in the world. They can be completely abased as much as exalted as a servant to the death of dogs, a recently-buried body, or a cuckolded and humiliated husband.

The paradox here is that the driving force of the story is the spiritual standing gained as a result of worldly loss. Think The Christmas Carol. The loss confers a supreme blessing.

(The Quest genre is driven by a material quest.)

From sad face to happy face with a major kick up the butt delivered to our moping and miserable heroine or hero thanks to a comely cast. Impossible to imagine without good relations with humankind. A testament to community action.

As with Up Lit, the heroine or hero has given up on change, and yet it happens to them through the conduit of another person In Brooklyn, Eilis meets a handsome Italian-American man who speaks of marriage. When a death summons her back to Ireland, where she finds that America has made her glamorous and desirable, and faces a choice between the old life and the new. Thus Eliza Bennett had to choose between her pride and prejudice and broader-minded possibilities for true communion with another person. A romantic novel has as its paradox that stability and peace are afforded by choice and change.

Driving Force: the disappointment of adulthood.

The novel explores, as does Bonjour Tristesse, a coming of age in which ones hopes for the noblesse of the adult kind are dashed. The paradox at the heart of this genre is that the more mature human being is immature and hardly grown up at all. The author warns the reader to go back, go back and retreat into the better and more benevolent state of innocence.

The Lion, the Witch and the Wardrobe by CS Lewis

When push comes to shove, as it must in Fantasy, there will be blood. Conflict between good and evil may be delayed by means foul, fair or magical but eventually, there will be a fleshy sacrifice. Nobility bows its head on the battlefield and takes the fatal blow. But don't worry, the hero will be there for the sequel, as will the 'real' bad guy.

Concerned with the home, so a novel like Little Fires Everywhere might sit here. Consider it in light of what is outside the home and how that threatens what's inside.

For women by women. (As are most novels. Yes, we don't like the term either but it is a commercially recognised genre). Driven by what it is to not be a man! Often with a positive result for the main character or characters who are women.

Upmarket fiction (the old 'literary fiction'!) that addresses universal, elevated themes while remaining accessible to the general public. It often deals with controversial or emotionally charged issues which may provoke conversation, or become a 'talking piece.' (Often considered preferable in marketing terms to 'women's fiction'.)

What agents sometimes refer to as 'breakthrough' novels are those which creatively combine genres. Think of Rebecca by Daphne Du Maurier — mystery, romance, crime. Or Notes on a Scandal by Zoe Heller which is given as literary, psychological and even comedy!

The key ingredients that I look for in a fully formed breakout premise are (1) plausibility, (2) inherent conflict, (3) originality and (4) gut emotional appeal.
Donald Maas

It's the cloak or dagger you're donning to articulate your entertainment, protest or desires.

Consider what's driving your story before you start and you won't go too far wrong. When you start writing a novel you need to know two things:

1. What the reader's reading your book to discover (the question you're raising.)

2. The driving force of your story.

Luckily you have two eyes, and two hands, so you can handle both.