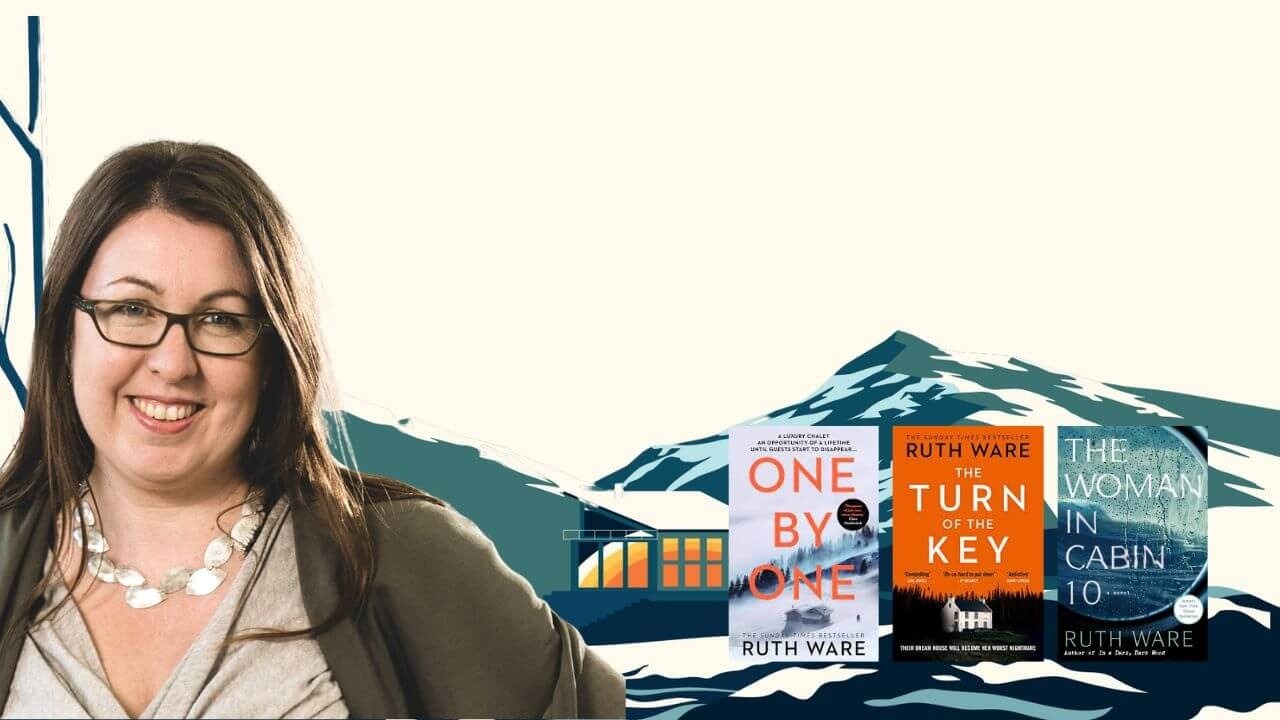 Ruth Ware is the New York Times bestselling author of psychological thrillers In a Dark, Dark Wood, The Woman in Cabin 10 and The Turn of the Key. Ruth is a British writer who started writing as a young girl, and later worked in the publishing industry before quitting her day job to focus on her own work – as a mother to small children.

In this article, Ruth Ware shares some insight into her writing process and editing process, and why she tells the stories she does in the way she does. It’s a fascinating read for crime readers and writers – or indeed for anyone endeavouring to write a novel in any genre.

Whether you’re about to start your first book, or you’ve already written several and are working on your next novel, we hope this might give you a little inspiration and get you that bit closer to a published book!

And if you enjoyed hearing about how Ruth Ware approaches writing, you can read articles that other guest authors have shared.

My writing process begins with what I enjoy

I love reading them – I find a really clever puzzle with finite possible solutions is somehow that bit more satisfying to solve than a novel where anyone could have wandered in off the street and stabbed their victim.

I also love writing them, as the fact that I keep returning to the locked room structure attests. There’s something about setting yourself a challenge – a small cast of characters, a confined setting, a strictly limited set of options in terms of suspects, victims and murder weapons – and trying to be as creative as possible within those parameters that really sets my imagination sparking. 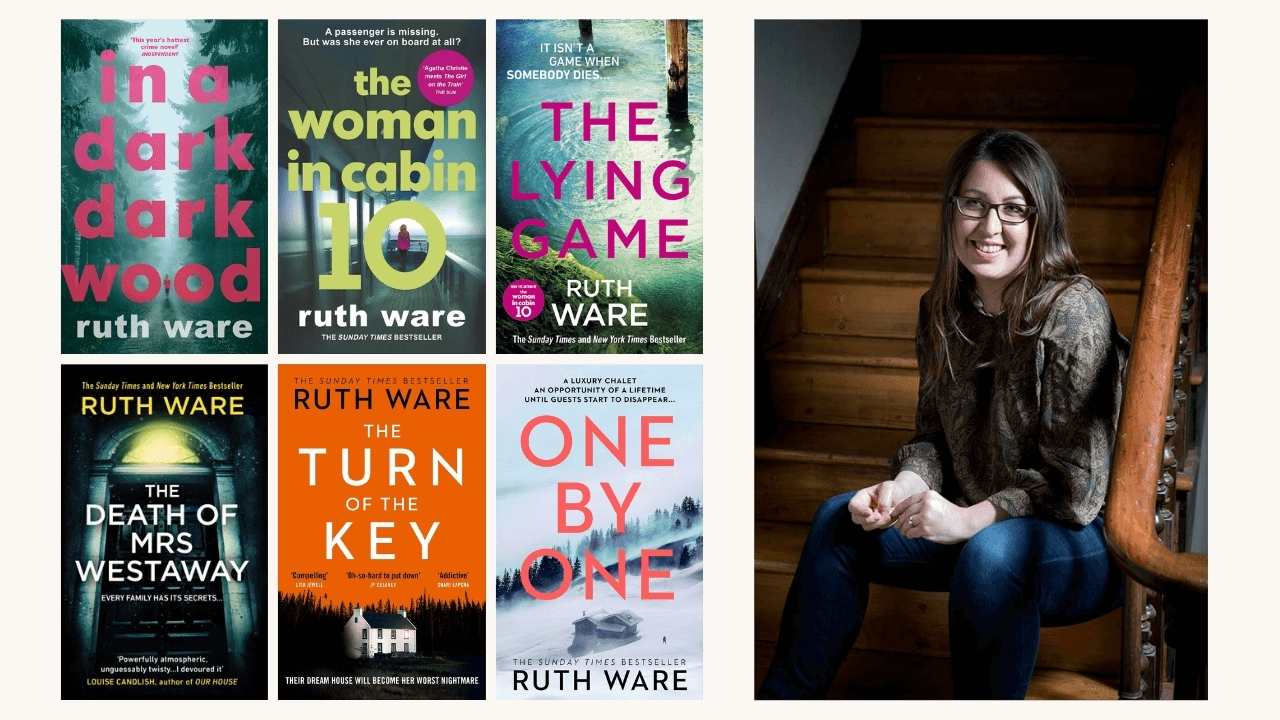 The first grown-up crime story I can ever remember encountering was a locked room mystery – Arthur Conan Doyle’s The Speckled Band, in which Holmes is confronted with the seemingly intractable problem of a healthy young woman who dies in her own locked bedroom, the only clue her strangled last words, ‘it was the speckled band!’

So maybe in some ways, the locked room imprinted itself on me as the quintessential form of the detective story.

Regardless, it was a format I returned to again in my new novel, the psychological thriller One by One, which takes place in an isolated ski chalet in the aftermath of an avalanche. Guests and staff are confined to what was once an enviable location but is now a slowly cooling deathtrap – and one by one, people begin to die.

This time however, there was a difference. I wrote the novel in 2019, but I edited it in early 2020 – just as we were entering lockdown.

Editing my newest book during lockdown

Like many other authors, I found I could not write during lockdown.

There was something about the enforced loneliness but also the enforced company – the house was full of my family, but at the same time I was deprived of many of my usual sources of inspiration: overheard conversations, people-watching, strange encounters.

There was no room for human interest stories in the news or on Twitter, only the hypnotically awful unfurling of pages of graphs and stats and figures.

Writing, for me anyway, requires a strange dance between the two halves of my brain.

When I’m actually putting words on the page, it’s my conscious mind that’s in charge, very deliberately picking and choosing from options and thinking through different solutions.

However, in between times, it’s my subconscious that takes over, solving plot problems while I’m out walking, coming up with characters while I’m asleep.

Often my most productive sessions are after a long period of enforced non-writing, I think because all that time my subconscious brain has been at work, figuring stuff out, coming up with twists, and when I sit down at the desk it’s all there ready and waiting.

Now, in lockdown, something seemed to be broken. I don’t know which half was at fault – whether it was my subconscious brain which was now awash with alarm and dread, or my conscious mind which was too distracted with homeschooling and the lack of loo roll on the shelves.

Either way, some vital link in the chain of back-and-forth seemed to be broken, and when I sat down to work, I found the words weren’t there.

I don’t know which half was at fault – whether it was my subconscious brain which was now awash with alarm and dread, or my conscious mind which was too distracted with homeschooling and the lack of loo roll on the shelves.

Editing, however, was luckily a different story, and in between Zoom meetings, BBC Bitesize and doom-scrolling on Twitter, I found I was able to edit my first draft.

In fact, having something to wrestle with – a dodgy sentence structure, a plot issue, a word that didn’t mean the same in British English as in US – all of that was a welcome distraction that, somehow, my mind was able to cope with. I could start thinking about something other than the impending doom that we were being bombarded with.

As the edits wore on, into copy edits, and proof, I re-read the book again and again and somewhat to my surprise, I found that I loved escaping reality into my characters’ snow-bound world.

Making a deliberate decision to escape into my work

It seems perverse, to want to escape one kind of lockdown by immersing yourself in another, but for some reason, it was an escape, and I found myself sympathising with my characters’ predicament in a new and personal way.

Like the rest of us, they were confined to a single residence, rubbing their companions up the wrong way, reacting to stressful situations with irritability and short tempers. Fortunately, however, unlike my main character I did not have to contend with a murderer and an avalanche.

It may seem strangely contradictory to respond to a stressful situation by escaping into a fictional world where the stakes are even higher. But in adversity, my characters generally find themselves to be smarter, more resourceful and more courageous than they knew – and maybe that was what I needed to hear.

I found myself reflecting on how Agatha Christie remained one of the most popular novelists throughout World War II. People read her murder mysteries to escape the daily reality of death and war – perhaps reassured by how much worse things really could be, and how Poirot seemed to set things to rights nonetheless.

In adversity, my characters generally find themselves to be smarter, more resourceful and more courageous than they knew – and maybe that was what I needed to hear.

I don’t have a detective in my novel to wave a magic wand and produce justice from a hat. And likewise, back in the real world, there don’t seem to be any easy solutions either.

But somehow, my imagination has started ticking again. And as we head into what’s likely to be a difficult winter one way or another, I’m confident that even if I can’t leave the house, I will at least be able to escape.