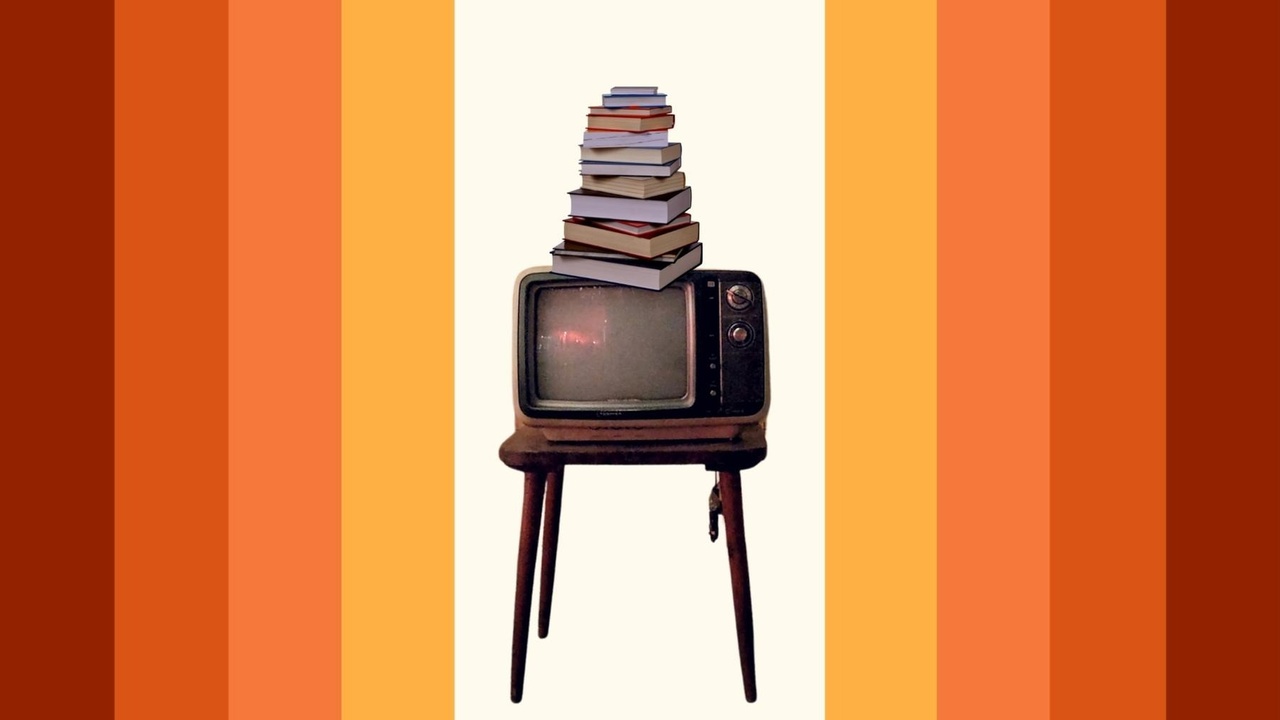 If you’re thinking that everything in your story has to be fresh and unique, that’s not the case, and it's probably impossible – like imagining a new colour. Here's how to handle and recycle the best-loved tropes of fiction.

From the desk of Craig Leyenaar.

I have this thing that I do when I’m watching films. Sometimes I predict what the next line of dialogue is and more often than not, it’s pretty bang on. Am I psychic? I wish. There are certain patterns to storytelling (depending on who you listen to, there are anything from one to seven basic plots) and once you’re familiar with them, they become the obvious choice. That’s essentially what a trope is – it’s the easiest, most obvious choice.

What is a trope?

Tropes are the dreams of speech.
—Vladimir Nabokov, Ada, or Ardor: A Family Chronicle

We don’t create stories in a vacuum. They’re the sum of everything we’ve read and are often similar to what we enjoy reading ourselves, so it’s perfectly natural that your story will contain familiar elements.

The reason that clichés become clichés is that they are the hammers and screwdrivers in the toolbox of communication.
—Terry Pratchett, Guards! Guards!

Don’t panic! Like with everything, tropes are tools and it’s all about how you use them. Think of them as building blocks. Remember, readers seek out more of what they like, so often some element of familiarity works in your favour. You have proof of concept, which publishers love.

They're each on either end of the spectrum. They’re never positive, but instead range from neutral to negative.

Tropes and clichés can refer to a certain character, setting or even a plot point.

Think about the buddy cop movie featuring two detectives with diametrically opposing personalities who start out hating each other, but learn to respect each other, who might even save each other’s lives, learn to be a bit more like each other and end up as friends. The first part is the trope, the rest – which involves character, plot and likely setting – has descended into cliché.

Female mercenary… She is usually tall, thin and wiry, silent, and neurotic… You can rely on her absolutely in a fight. She can usually kill two people at once while guarding your back in between… Mostly, she will have no magic talents, but sometimes, in an emergency, she will come up with a gift or vision. You will end up grudgingly admiring her.
—Diana Wynne Jones, The Tough Guide to Fantasyland

When we’re talking archetypes and stereotypes it gets a little more specific, but it's a similar approach to identifying them.

The first thing is to see that these two terms refer to characters alone, as opposed to the broader terms of trope and cliché. Archetypes are starting points, whereas a stereotype is the endpoint. Importantly, it’s a predictable and often negative endpoint. Stereotypes are a sign of lazy writing because they’re broadly applied sets of attributes drawn from assumptions about the way people are, rather than an individual.

There’s no simple answer. They can be a very useful shorthand for setting up situations. Think of the scene where the teen sneaks into the house and darts upstairs while there is a man in a stained vest sitting in the dark watching an old TV with an empty beer bottle fallen just below his dangling fingers. You could almost fill in their family history and dynamic with just that one scene. The key factor in this situation is that this trope doesn’t define those characters, it introduces the foundations from which your characters will tell their story.

Tropes can also be huge fun when you make them your own.

Buffy the Vampire Slayer was a brilliant, long-running series entirely based on the subversion of a single trope: the blond, high school cheerleader, who is always the victim in horror films. The series asks: what if instead of being hunted, she was the hunter?

Sometimes, leaning into the trope can work incredibly well. Personally, I love the mad scientist trope. Give me a crazy-haired Doc from Back to the Future any day.

How do you avoid a trope being a cliché?

If your elves live in the trees and are long-lived, highly educated and condescending, then they would be on the cliché side of the spectrum. How could you mix it up? What if you had an elf character in your secondary world and they’re a broken, damaged addict because their forest home has been destroyed by exploitative resource extraction? That would be taking a trope and using it in a fresh way. If all the elves were broken, damaged drug addicts then that would become a stereotype (see below).

It is a cliché that most clichés are true, but then like most clichés, that cliché is untrue.
—Stephen Fry

According to Carl Jung, there are twelve archetypes:

These archetypes aren’t characters, as they have no past, no motive, no goals… no story. They’re concepts. Think of them as the foundation of the character house you’re building (if you choose to use them). And that’s what you’re doing when you write them into your novel. You’re developing character.

What is a stereotype?

If they don’t develop beyond the concept (or archetype), then they can become stereotypes.

Stereotypes are a specific set of characteristics assigned to a category that are representative of wider assumptions about a particular group of people.

For example, if your dystopian underclass is populated by pimps, prostitutes and addicts, or every character from a particular ethnic group just happens to be a criminal, then those are stereotypes that should be avoided because they are harmful. If your novel features different species that hate each other just because (and worse, if they’re thinly veiled stand-ins for real groups of people) then that is both a cliché and a stereotype, which should be avoided at all costs!

Worldbuilding tropes are not necessarily negative. Sometimes the trope is needed for the basic story to function – people need to get around the galaxy and not have the journey take thousands of years (although the time dilation effect can create some amazing stories, for example Simon Jimenez’s The Vanishing Birds opening chapter or Alastair Reynolds’ Revelation Space series). Or, perhaps, a horror novel that needs the haunted house, otherwise there would no story – Shirley Jackson’s The Haunting of Hill House or Silvia Moreno-Garcia’s Mexican Gothic are both brilliant novels that couldn’t exist without this trope. And you couldn’t have a story about characters going on a quest without the quest!

Secondary world fantasy novels are hard to imagine without the pseudo-medieval setting, yet if you change that to ‘pre-industrial’ it opens up a whole range of possibilities that aren’t repackaged versions of medieval Europe. Grimdark was originally a subversion of the classic high fantasy trope of a magical, green land populated by happy(ish) peasants, and told stories about what it would actually be like to live in those worlds: grim, brutal and bloody.

How to subvert a trope

I’m sure you’re tired of hearing ‘subvert the trope’ – in fact that phrase has become something of a cliché itself! But the intention behind it is still relevant. All it means is do something unexpected. And that’s what good storytelling is. It’s unexpected.

You can play with reader expectations by knowingly using tropes and then changing the game. So, don’t worry if part of your novel has tropes – you can’t subvert something that you’ve not introduced.

You either die a hero or you live long enough to see yourself become the villain.
—The Dark Knight (2008)

The first step could just be a few basic changes. Seemingly innocuous changes that have an outsized impact on the story. Think of the 'classic farm boy finds sword' tale. What happens if it's a farm girl who finds the sword? In the standard medieval fantasy setting, this immediately creates a lot more potential conflict if it’s a patriarchal society where women aren’t allowed to be soldiers.

In Joe Abercrombie’s First Law trilogy, the wise old man (aka Gandalf figure) is the arch-manipulator, and the Chosen One is a fabrication.

The helpless princess and evil ogre fairy tale tropes are wonderfully subverted in Shrek – although, now, the Strong Female Character has become a trope in its own right and can veer into cliché if she's written as a Mary Sue character.

Most subversions ultimately turn into tropes themselves, so be wary of taking the easy option. The easy choice is rarely the right one when it comes to writing.

What do I do now?

If you’re wondering where to begin, you could start with the basic archetypes themselves. Mixing and matching archetypes can create some great characters. Think about Bob Odenkirk in the film Nobody – he’s a mix of the Everyman and the Hero. This has become something of a trope since Bruce Willis in Die Hard, but it's still an effective foundation on which to build character.

Let your characters breathe as you write them; don’t constrain them with expectation.

Clichés were like plaque in the arteries of the imagination, they clogged the sense of what was possible.
—Charlie Jane Anders, As Good as New

The one takeaway you should have from all this is essentially one word. And it’s not unique. Unique is unobtainable and also a bit of a no-no because publishers are risk-averse, and if other similar novels have a proven track record then it makes everyone’s lives a little easier. Conversely, one of the biggest pitfalls of using tropes is that it makes your novel predictable. Safe. Comfortable.

Being a writer is about walking that line and knowing when to lean into a trope to give readers what they want, while also taking your story in a fresh direction.

What you should aim for is to be unexpected.

Once there was a girl who ate an apple not meant for her... Up until the apples, she had been living in a wonderful house in the wilderness, happy in her fate and her ways. She had seven aunts and seven uncles and a postdoctorate in anthropology.
—Catherynne M. Valente, Silently and Very Fast

To be unexpected, you first need to set up reader expectations, so go ahead and use those tropes and archetypes, but use them in a way that’s uniquely yours.

Questions to ask yourself

Here are 36 tropes that relate to settings, plots and characters which I’m sure you’re all familiar with. Why not have a bit of fun and see how many might apply to your story? Don’t worry if you tick off a few! Remember, it’s all about how you use them. 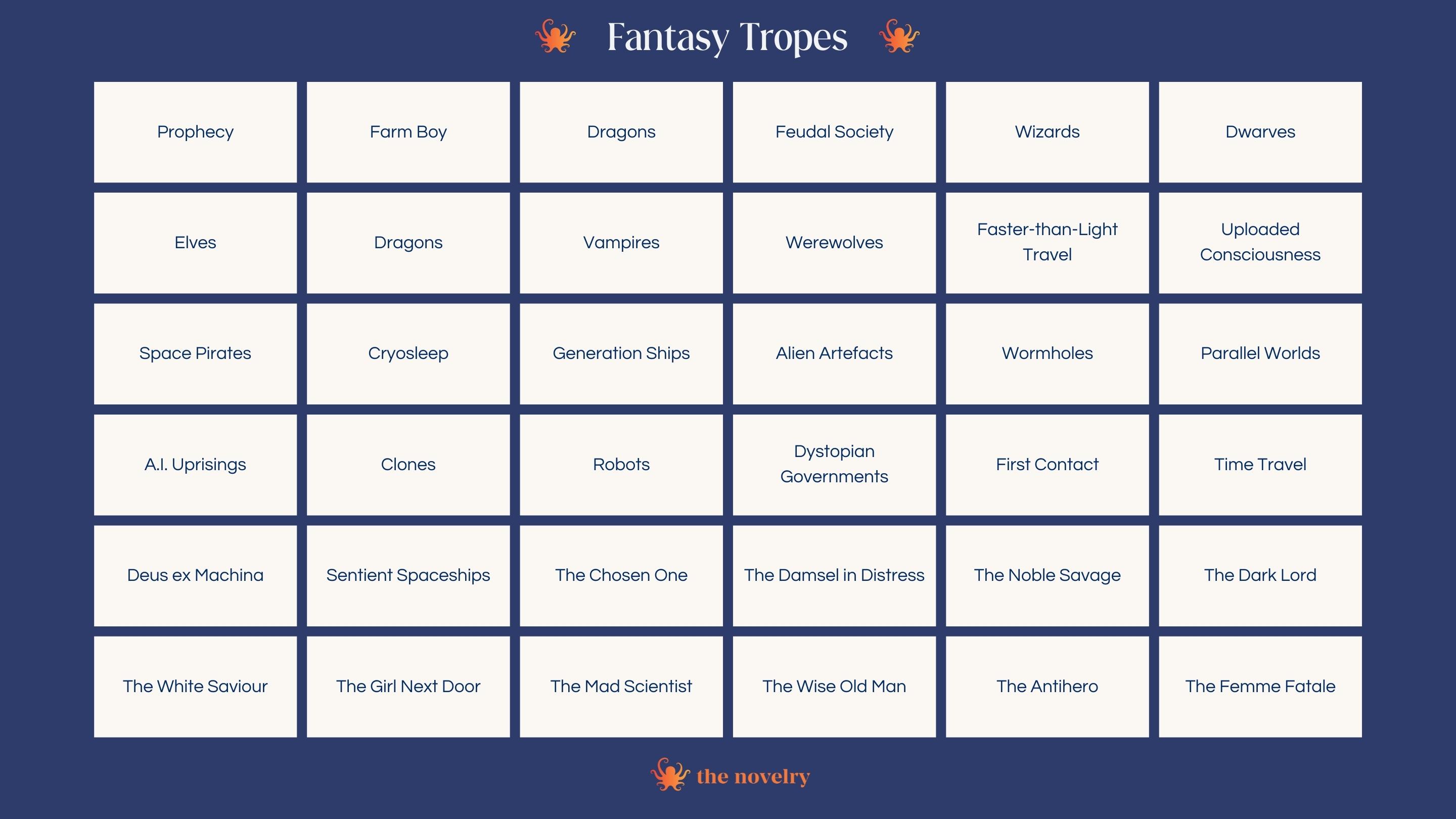 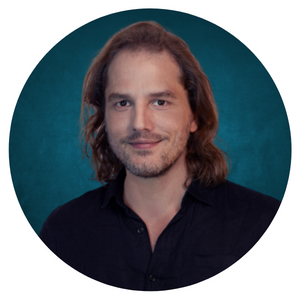 Before joining us, Craig Leyenaar was a commissioning editor at the famous Titan Books, a publisher specialising in science fiction, fantasy, horror, crime, and thrillers, and home to authors including Stephen King, V.E. Schwab, James Lovegrove, Mikey Spillane.