The Second Novel & Beyond. 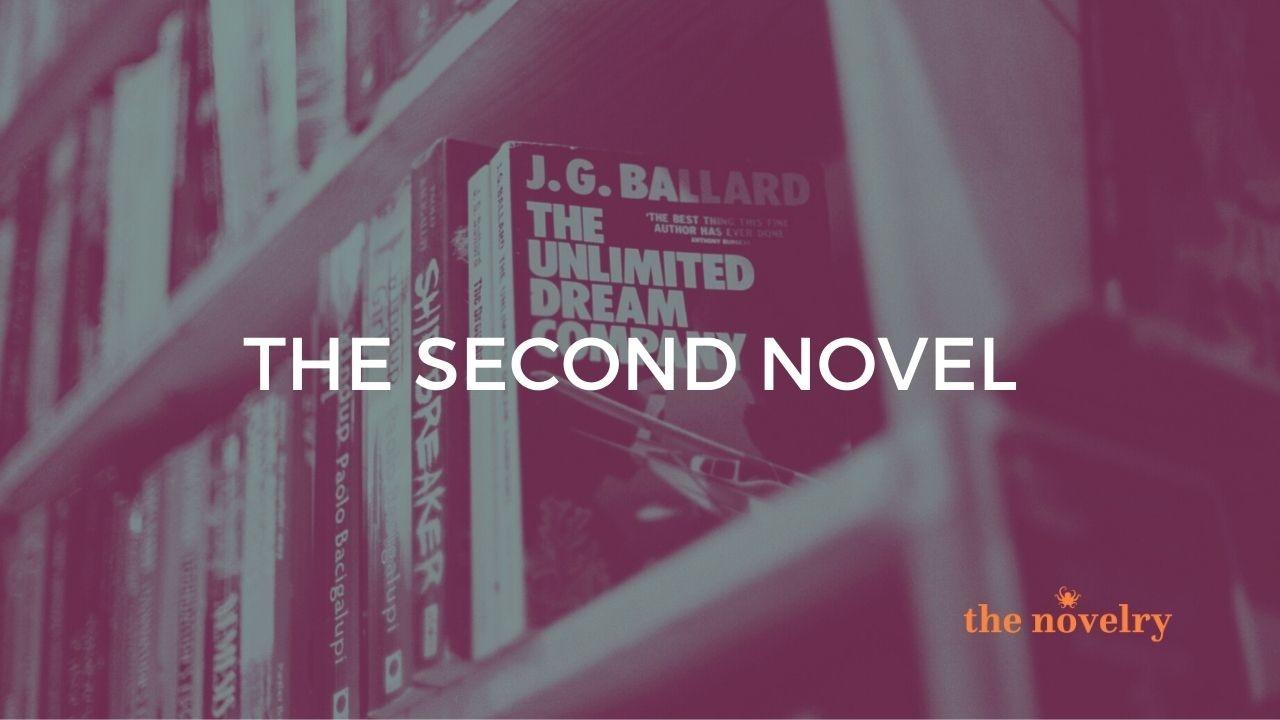 We have all heard of the 'enfant terrible' of the second novel.

The much-feared 'Second Novel Syndrome' bodes not so much a happy ending as a marked drop in sales leading down the garden path to the midden of the mid-career sag. (See this blog for details.) One is supposed to anticipate much wailing and gnashing of teeth in the author's kitchen as indifferent, scant reviews come in followed by poor sales. A far cry from the heady days of 'the debut of the year.'

The heady praise of the debut can lead an author to think they're a natural-born killer when it comes to novels. They've got a gift. Talent! Innate!

I don't believe in 'talent'. I do believe in staying power, reading, love of the craft, humility, mischief, discipline and routine.

With your first novel, you were obliged as an unknown to pull out all the stops. Every pretty rejection sent you revising. You got feedback from the best readers you could find. You invested in your writing with a course and you spent money on editors and proofreading - all the resources you could muster. And you learnt from every knock-back. You earnt that success.

Oh, wasn't life wonderfully rewarding before you thought you had talent?

Come to Mother Novelry, second novelists and beyond! We have ways to ward off that second novel or mid-career malaise.

Many of my writers have written and published novels before they come home to The Novelry and commit to maintaining the life of their writing career.

At The Novelry you're surrounded by writers who keep their ideas fresh and their tools sharp. You're clued into the shifts of the market but we take a sanguine long view, and focus on the viability and readability of the story before we let you start work. We're not just a 'course' we're the home of happy writing for novelists. At the end of a 'course' elsewhere you may or may not have a novel in draft, you may or may not have a story that will sell. We do our damndest to take no chances. We don't leave story to accident and hope one falls out of your 'talent' sideways. We bring story upfront and ensure the routine, skills and our support will see it through.

First, I will ask you at our first live session together - what do you want from your writing? Then we make a custom plan based on your wishes. I make a promise to you. You are the author, you get to play God in this part of your life, but I will tell you the price of your choices and decisions so that you're in a position to consider them fully.

Here's what you need to consider with every novel beyond your first.

Genre. Ask yourself is it wise to swap? If you want to build a career you need to build a brand in your genre. There are pros and cons to changing genre.

I didn't suffer from Second Novel Syndrome because I set myself the challenge of a different genre. The Telegraph kindly said I'd raised the bar with my second novel and soared over it. Nice. But, hmm, oh dear, what kind of writer was I? Literary? Contemporary? Or Historical? Or Political? Thrillers maybe?

So while I kept my prose game on par, the novel was detrimental to my 'career'. (No, I don't regret it.)

Naturally, there is a consonancy to one's style, and kind reviewers latched onto my 'fearlessness' over the course of my books and my 'dark humour.' But it wasn't quite enough. I paid the price for it with bookstores uncertain about how to sell my books or where to put them on shelf. I got lost.

So, when considering your next novel, ideally stay in the same genre, but if you don't then accept there will be a price to pay.

The Premise. You have to raise the game and go as high-concept as you can. A one-liner elevator pitch to get the publisher's sales team excited. (We call it 'the hook'.) Note - if you cannot articulate it, you're in big trouble. We tackle this within the first seven days at The Novelry and thrash it out until we love it and it's on fire. I ask you to put it up on your wall and not to deviate. We get you into a routine that works for you and check up on your progress regularly.

What happens if you write over a long period of time? You're likely to deviate from the premise and water it down as life events, the news and other ideas come at you sideways and you think - given my talent, I can bring these fabulous ideas into it. Just because it's your idea, my darling, doesn't make it wonderful! I have a little mantra I can offer you which I use when my writing drags on past a season: if it seems like a good idea, it's not.

Point of View. In the race of the last hundred years between the two horses of third person and first, first person has won in a commercial sense. If you can write this next novel in first-person, do so.

Now, I just can't handle first person very well. I use third-person to find a tender distance with all due regard for the possibilities of my cast for growth and change. You see, I find writing in first-person has a worldview and certainties set in aspic. This, however, is a key feature of a psychological thriller.

So, knowing that's a demerit for me as a writer, I have to work harder to keep the novel moving - like a movie. I use shorter chapters, visual elements, and surprise. Something must happen on every page - I cannot muse. In first-person, you can muse away. It's part of creating an immersive experience. Not so in third person. For this type of writing reading a novel like The Godfather offers good training.

Work That Novel. Don't ever share work at first draft and swerve courses that ask you to do so. it can be very unsettling. Ideally, work with one writer you trust to get comradely assistance with craft. But after the first draft, get wise feedback, ideally from writer-readers as we offer at our workshop The Novelry Lodge or on one of our retreats. Put the novel through hoops as you did with your first novel. Revise. Get feedback. Revise. Get it professionally proofread too. Because you have succeeded before, you have to work harder this time. Don't rest on laurels but raise your game and get help and advice from wise readers.

Don't go solo, thinking you have the gift. The gift you have was for getting help ie. getting readers before you had readers in order to know what readers want. Reminder: a good writer is a writer who doesn't waste their readers' time.

Go the extra mile beyond the last novel. It's a cruel world in terms of media, far crueller than when I started over twenty years ago. Back then, there were under thirty critics whose opinions were shared, now there are millions. The point is not to care about all of them. Do not read reviews across the internet, do not search for yourself or your book. Ideally, delete that Twitter account if it's in your author name. Protect yourself to stay stable and well for the good of your career.  Prefer the critics' press reviews and take the learning on board to benefit your next book.

Consider your work as a product. Dissociate from the very conception of the product. Don't be a character in your novel, not wholly. Of course, your experiences will be lifted and reworked and used in the novel. That's normal. But by putting yourself in whole you're in big trouble both in the writing and after publication as when your product gets reviewed you'll take it personally.

Your agent will wish you well, and love your new idea and hope to hell you'll pull it off but they can't babysit you or write it for you. Which is why you need something like The Novelry. A guild for working novelists.

Aim to create the very best product that you can, and as all commercially successful creatives know, collaborate with peers. Which is to say - standards, my dear, standards. Work with those who have higher standards than you do, not lower. Work with a writer whose work you like and respect and get him or her on board as your buddy from the outset, ask for the truth and make your choices in an informed way. Now, you're a professional.

By the way, the Second Novel Syndrome is not a modern phenomenon. It's in part spurred by those ardent critics who consider themselves avant-garde and hail the new above all else.

Fyodor Dostoyevsky suffered from SNS most dramatically. His first novel Poor Folk was passed before publication to legendary critic Belinsky who declared that Dostoevsky was the heir to Gogol. Dostoyevsky was hailed as the new literary genius of St Petersburg. It went to his head it is said, alienating his literary friends, who revenged themselves when he published his second novel, The Double.

Yes, as dear Gore Vidal put it so well, 'every time a friend succeeds, I die a little.' Your literary success may score a backlash but Fyodor's was calamitous. His 'success' lasted just 15 days. Poor Folk was published on 15 January 1846; The Double followed on 30 January.

Thirteen years later Fyodor emerged from exile to score a comeback with his novel-memoir House of the Dead, but according to biographer Mochulsky, Dostoevsky never recovered his confidence. Even as he was writing some of the greatest books in world literature he remained consumed with anxiety that he had not yet "established his reputation".

In our times. there's poor old Gautam Malkani, author of Londonstani (2006). Massive hype, a £380,000 advance – and hardly any sales. Thirteen years later, his second novel was published in 2019 by crowdfunding publisher Unbound (no advance there, then) to tepid reviews. "Unfortunately, the supporting cast don’t have any real life to them, and parts of Distortion are repetitive or just plain dull, as ideas or scenarios are played and replayed. Digital dependency may be at its heart, but this intriguing, messy novel is a little too easy to put down." The Guardian.

Our hearts may go out to Mr Malkani, the overblown advance of the first novel may have brought in its wake the crushing of the author's spirit. But our very best advice to all of you is never mind the bollocks! Keep raising your game and write every novel as if you're writing for the first time.