It is with modest boldness, I say to you that creativity is about putting two things together which should not go together.

Such as modesty and boldness.

The greater the opposition between the two things, the more attention the new construction merits.

You start with the idea for your novel itself and you take this through your practice in prose.

This creative method is practical and simple. 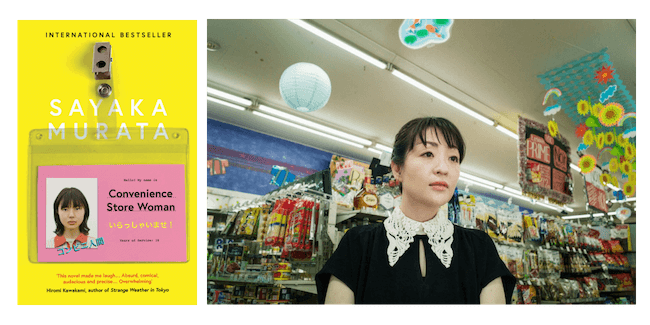 This week I have been reading Convenience Store Woman by Sayaka Murata (2018). It was described in The Guardian review as 'sublimely weird.'

A literary prize-winner that's also a page-turner, it sold 660,000 copies in Japan alone and won  Japan’s most prestigious literary prizes, the Akutagawa Prize. Convenience Store Woman is a  portrayal of contemporary Japan through the eyes of a single woman who fits into the rigidity of its work culture only too well. Sayaka Murata still works part-time in a convenience store. In 2016, Vogue Japan selected her as a Woman of the Year.

The nub of the idea for her novel encapsulates the tension of creative contrast. A social misfit finds herself at home in the most managed of homogenised environments - one identikit store of a chain whose workers are trained to perform like robots in their uniforms.

An anaemic environment proves the venue for a Gothic romance, but the romance in the book is not that prescribed by society - between men and women - but between Keiko and her workplace.

The idea is delicately expressed - Keiko has a darkness, a slight malevolence as her putative character flaw - and lives in the fluorescent lights of a place which is treats her for it. Like a clinic.

'A convenience store is a forcibly normalized environment where foreign matter is immediately eliminated.'

'The baby started to cry. My sister hurriedly picked him up and tried to soothe him. What a lot of hassle I thought. I looked at the small knife we’d used to cut the cake still lying there on the table: if it was just a matter of making him quiet, it would be easy enough. My sister cuddled him tightly to her. Watching them, I wiped some cream from the cake off my lip.'

When you start with an idea this simple, this clean, this neat, you can't go far wrong.

A novel is a moral journey. Find the character's flaw or problem and work it out through conflict which forces them to address it. If you begin with that flaw then cast it against the relief of a background intrinsically opposed to it, you're onto a winner.

With that cracked, Murata is able to explore some fascinating anti-heroic themes for our era.

Keiko has never had sex and has no interest in sex. It amused me, and I found it a liberating notion. In one scene, her sister is bemused by Keiko's live-in lover (who is not her love) and highly suspicious and concerned when she sees he sleeps in the bathroom until he pretends they have been arguing about him cheating on Keiko. The sister is mightily relieved.

We live in a time saturated with sex, and this felt most cordially countercultural.

The Japan Family Planning Association interviewed 3,000 subjects about their sex lives (both men and women) in 2016. The study revealed that nearly 50 per cent of those quizzed didn’t have sex in the month previous to the interview.

Of the men interviewed, 48.3 said they had not had sex for a month, while 50.1 per cent of women had abstained. Both figures were up about 5 percentage points from the previous study, conducted in 2012. Among the women, 23.8 per cent said sex was "bothersome" and 17.8 blamed being tired from work.

Most startling of all, however, was that 20 per cent of men aged between 25 and 29 – the period of a man’s life usually dedicated to the spreading of wild oats – expressed little interest in sex at all.  This group is known as "herbivores" in Japan.

The book explores the way in which our standing in society is transactional, dependant on our sexual relationships, and that these alone - 'getting it' - make us normal to other eyes.

Murata contrasts the way in which Keiko's physical nature comes back to claim her when she leaves the store with the pristine store interior.

The Permeability of Personality.

At several points in the novel, Keiko, our heroine, considers the use of a language of the 'normal' people about her and ascribes variations in speech patterns to the people they associate with and aspire to emulate. The suggestion is that this is one way of staying safe in 'the village' as Shiraha - the faux love-interest dubs the modern age. Keiko herself mimics those she trusts, in order to better camouflage herself.

The prose style is innovative and breaks some rules - there's an abundance of exclamation marks and 'Um's in dialogue. This fits very well with the bland willingness of the assistant trained in customer service. The benign almost sickly manners of the store assistant pique the interest of the reader, who knows already about Keiko and the small knife she could take to her nephew.

As an interesting aside, the novel is just under 39,000 words but is not listed as a 'novella'. Is the terminology dead? With so many good, short books (even great short books) perhaps the boilerplate 70k for a novel is gone?

The Controlled Environment to Contrast with the Theme.

In Woody Allen's film Wonder Wheel (2017) the anxiety of the Rannell family's home life thrown into further despair by the arrival of forlorn, 'marked woman' Carolina is thrown into stark relief by the gaiety of Coney island fairground setting.

God knows, you gotta love a controlled environment not suited at all the disposition of the cast. Unwittingly, I'll admit this was the set up for my first novel Becoming Strangers (2004) where two couples repair to the Caribbean to get a handle on their end of life plans. The grey office location of Slough provides a great foil for the cast of jokers in The Office, too.

It's worth thinking about right from the outset of your novel planning.

Get a nice simple idea, keep it contrary,  and write it clean.

This method is at the very heart of the method of our novel writing courses at The Novelry. It's where we start.