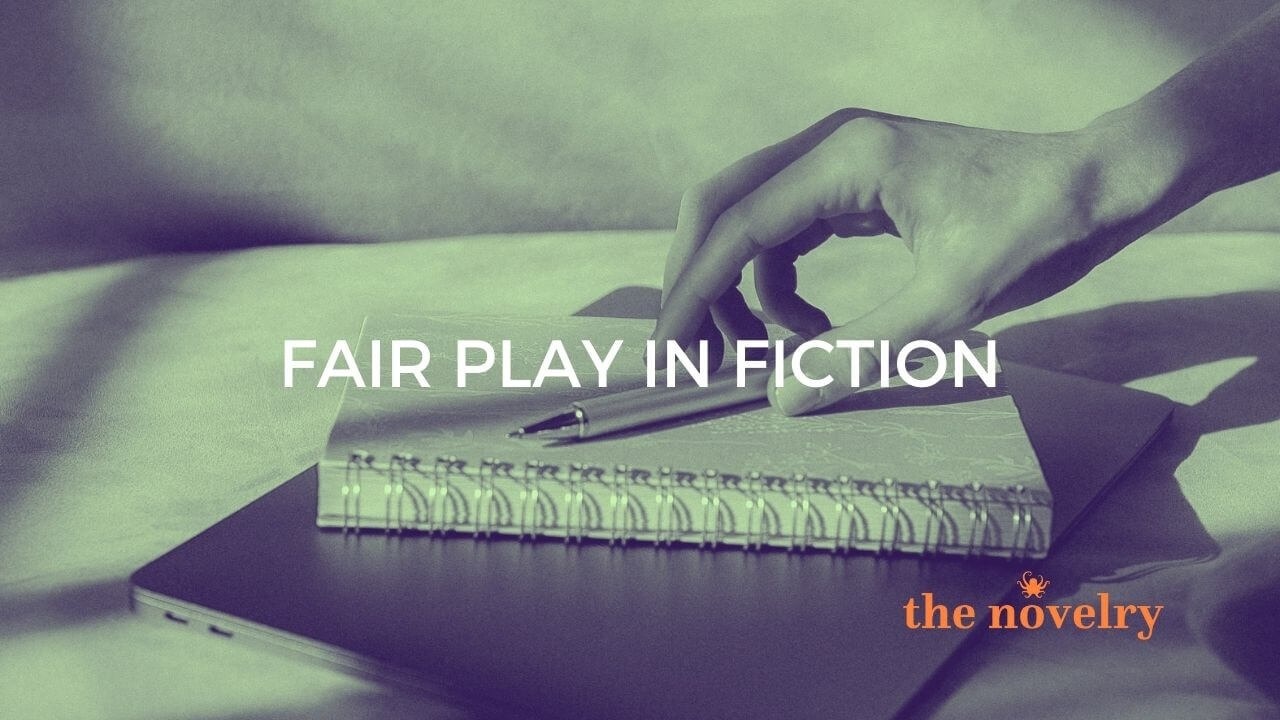 From the desk of Tash Barsby.

I’m a month into my new role at The Novelry, and what a whirlwind it has been. I’ve been lucky enough to talk with some fantastic writers and read some incredibly promising work, which is what I have always loved the most about my job – that close relationship between author and editor is truly such a special one, and having the chance to help shape ideas and drafts when they are so fresh is unbelievably exciting. But something I’m also really keen to bring to the writers at The Novelry is the opportunity to demystify the publishing process – particularly the parts that may be less obvious or that wouldn’t even have crossed your mind to consider (because they certainly hadn’t to me until I started working in the industry!)

So, in this, my first blog for The Novelry, I'm going to tackle the harder questions which often concern writers the most – what's fair in fiction?

There’s a disclaimer on the copyright page of every work of fiction that will say something along the lines of:

‘This book is a work of fiction and, except in the case of historical fact, any resemblance to actual persons, living or dead, is purely coincidental.’

So does this mean you aren’t legally covered if you purposefully write a real-life character into your story?

Depending on your genre and setting, including factual elements and real-life references can help to bring a valuable sense of authenticity and background colour to your novel. A teenage character in a novel set in the years between 2010 and 2020 would, undoubtedly, be a hardcore One Direction fan; references to Fred and Rose West wouldn’t be out of place in a crime novel about serial killing duos; it would probably feel as if something was missing if the Eiffel Tower was never mentioned in a novel set in Paris. Your characters are allowed to have opinions on politics, on religion, on the latest celebrity drama – these are useful factors when it comes to creating and contextualising memorable, relatable, three-dimensional characters. However, if your story turns on references to real-life news stories or includes material that may have a genuine impact on someone or something’s reputation, then you need to be wary of saying anything that could be considered damaging.

For example: if you were writing a novel about sex abuse in the Catholic church and centred it around a real church, with a real priest committing abuse, that would most likely raise some eyebrows. In that case, I would highly recommend creating a fake church or fake priest through which to explore the real-world issue. If you have a scene where your character finds themselves sat next to Russell Crowe on a plane and gets snapped at for asking for an autograph, his lawyers are highly unlikely to come after you; if the crux of your story is that Russell Crowe is running a worldwide drug smuggling ring, they might have something to say about that.

The same thinking applies if you are basing a character on a real-life person – if they are easily identifiable regardless of any changes you have made to ‘hide’ them, and their portrayal in your novel could be argued to cause them reputational harm, then this is also something to consider. Let’s say your novel is set in the 90s and the main characters are a pop band of five female singers, one of whom wears a Union Jack dress, who are called the Herb Girls and have a hit song called ‘Herb Up Your Life’. It would be very obvious to anyone reading that these characters were actually the Spice Girls, and so any scandalous material written about your ‘characters’ could be considered damaging. Even if it were something that had been previously reported in the tabloids (e.g. an affair, allegations of alcoholism), this doesn’t mean you can take it as fact when representing them in fiction.

If you’re ever unsure, play it safe.

Flag any queries or concerns you have to us at The Novelry, or later as you approach publication, your agent or editor, who will escalate it to their legal team, or seek legal advice before publishing. The final decision is yours, but please listen to the advice you’re given: if a change is suggested, I would strongly recommend you make it – unless you have a very, very good reason not to and are prepared to defend your case (more likely in the court of social media than in a court of law, if we’re honest, but never say never).

So when else might you need a more experienced pair of eyes to look over your manuscript? Authors love to put quotations in their work, whether it’s within the text itself or as part of an epigraph – for example, song lyrics, poem verses, film quotes, newspaper articles.

If a quotation fits the themes of your novel, or would enhance a particular scene, and it feels important to you to include it then by all means do – but just be aware that, depending on the length and content of the quote, you may need to seek official permission (and sometimes pay) for the pleasure of doing so. As a general rule, all quotes should be attributed somewhere in the text, whether that’s on the copyright page, in the acknowledgements or in a sources section. If a quotation is under a certain length (roughly under two lines) then it will usually be considered ‘fair dealing’ – unless it’s part of a particularly famous line or the quote you’re using makes up a substantial part of the original, in which case you would likely need to clear official permission from the copyright holder. Always make a note of where you have sourced a quotation from – it will save a lot of time and effort in the long run. Seeking permissions for publication can be a long process, so the earlier it’s started the better.  Generally, text permissions are considered the writer’s responsibility, as it’s your choice to include the quotation, so it is down to you to seek and where necessary pay for permission – and you’d be surprised at how pricey they can be.

Those are some examples of how to deal with the real world within your fictional world from a legal perspective (with the caveat that I am not and never have been a lawyer, so this is purely based on my understanding from past experience). But what about from a moral perspective?

A topic that has become increasingly prevalent in the publishing world recently – and for very good reason – is that of own voices, and who has the right to tell a particular story. Cultural appropriation has become a very important matter.

We’re all familiar with the advice to ‘write what you know’ – but is that always feasible? Fiction, by its very definition, is not real – to some extent, all fiction writers need to draw on experiences outside of their own lives for their stories. But when that experience is too far removed from a writer’s own experience, that’s when a sensitivity reader is called for.

Whilst of course no one can claim to speak for an entire demographic, the likelihood is that no matter how much research you have done, inaccuracies or stereotypes will undoubtedly creep through the gaps through unconscious bias, and so having that outside perspective is vital to ensure fair and accurate representation.

Undoubtedly, we need more diversity in fiction, both in terms of the voices being heard and given a platform and in terms of representation on the page, and sensitivity readers do hugely important work in bridging that gap and opening up a vital conversation between members of a marginalized community and those outside it.

A sensitivity reader will offer thoughts and advice, guidance on language and terminology, to enable you to improve how a character is representing a particular experience and help you to avoid perpetuating stereotypes – they are not there to do all the research and emotional labour for you. The initial work must come from you – if you haven’t done the necessary research into the realities of someone’s lived experience, you shouldn’t be writing about it.

Perhaps because sensitivity reads are still a fairly new undertaking for many publishers, there isn’t a ‘set’ process – but generally, it would seem to make sense for you to work with your editor on the story, and then have a sensitivity read done before it goes to copy-edit. If you believe something you’re writing would benefit from a sensitivity read, flag it to your editor early or secure a read before submitting it to an agent or editor. The pool of sensitivity readers is, thankfully, growing and it’s hugely important to find the right reader to assess your work.

As with a lawyer’s advice on the portrayal of real-life people or places, the decision whether to take in the sensitivity reader’s changes is ultimately the author’s call – but please consider their advice carefully and really try to understand where they are coming from with their comments. Sensitivity readers aren’t there to rip your characterisation or entire novel to shreds – they are on your side, and their aim is to help your manuscript be the very best it can be. What may seem like an unnecessary change to you could be extremely important and meaningful to someone else, and make all the difference to how they respond to your story – and isn’t having your novel speak to a reader what it’s all about?

Further reading for taking care when representing the lived experiences of others can be found here as a starting point. (To compile this list, we have asked The Novelry team and guest authors to make their suggestions. With special thanks to Rachel Edwards and Louise Hare.)

Don't Dip Your Pen Into Someone Else's Blood by Kit de Waal.

Superior: The Return of Race Science by Angela Saini.

The Good Immigrant by Nikesh Shukla.

What White People Can Do Next by Emma Dabiri

So when I meet with those beginner students to discuss their first stories, I ask them to think of stories only they can write. Stories they know but have never read anywhere. Stories they always tell but never write down. That’s what this question is really about. Or could be. If the questioner asked it of themselves more often than they asked other people. Alexander Chee.

Cultural Appropriation for the Worried Writer: some practical advice by Jeannette Ng.

But if you’re looking to play saviour with your words, it is unlikely that you will do the marginalised people you are trying to save justice. Jeanette Ng.

Writing the Other: A Practical Approach by Nisi Shawl, and Cynthia Ward.

10 Steps to Non-Optical Allyship by Mireille Harper. ("Avoid sharing content which is traumatic to black people.") 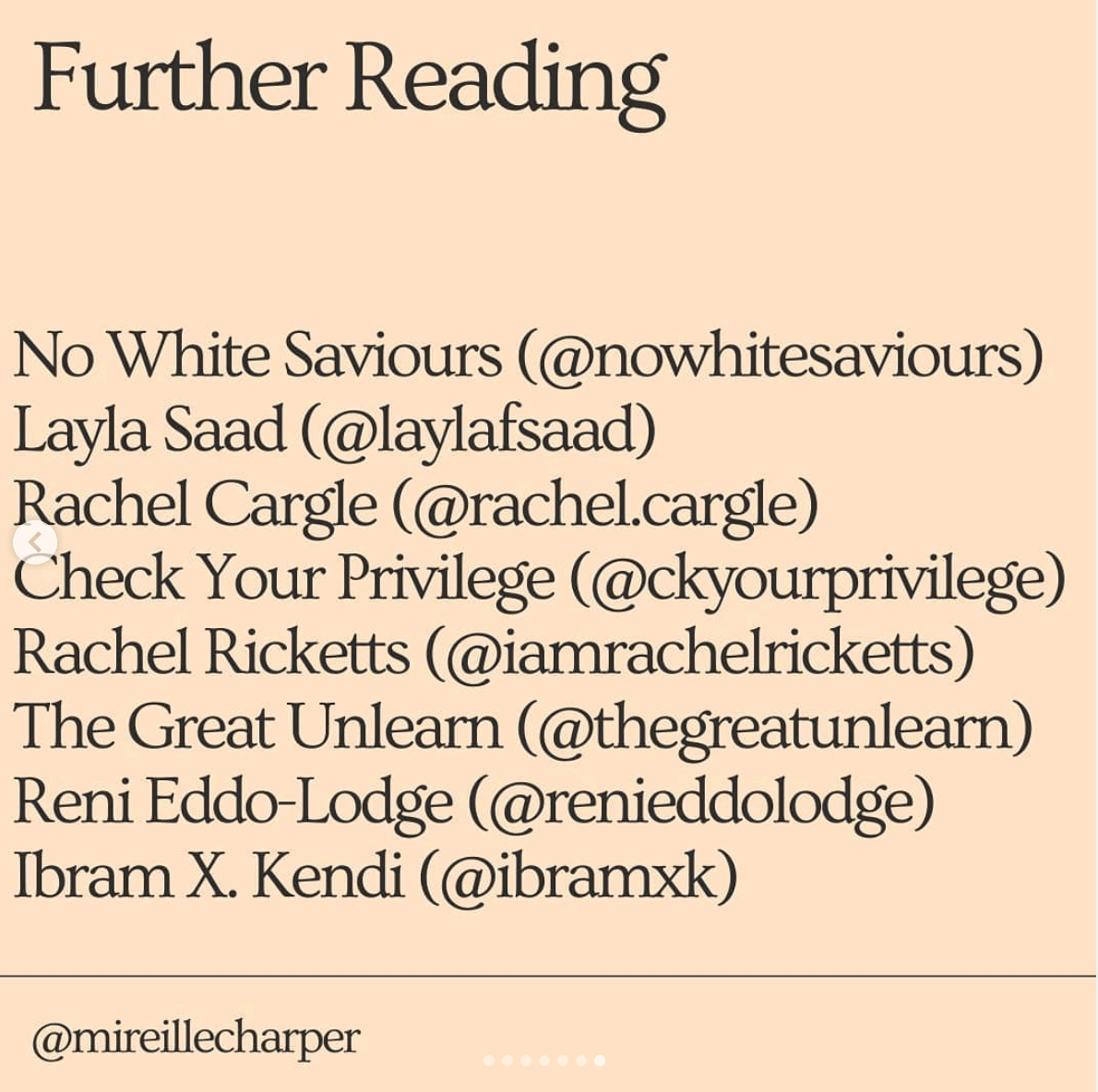