If you're about to write a novel, start with the midpoint. That's the place to build your world around.

The midpoint is the point of no return in the story, where the character undergoes a crisis, enlightenment cracks the shutters. The main character begins to wake up to the the qualities necessary to reverse the misfortune or pursue the action of the book through to a resolution she or he can live with and accept.

This is the point in the story at which the main character is most challenged and at their lowest. It speaks volumes about your true intentions for the book.

You may not be clear about these at first draft - I am usually a little in the dark - but locating the belly button will help you sort out 'what the hell is this book really about.' The idea is developed in John Yorke's book Into The Woods as a convention axiomatic to the development of screenplays.

'The midpoint in our change paradigm corresponds to the moment of Vogler's 'supreme ordeal'... the moment of 'big change'. It isn't necessarily the most dramatic moment, but it's a point of supreme significance.' John Yorke. 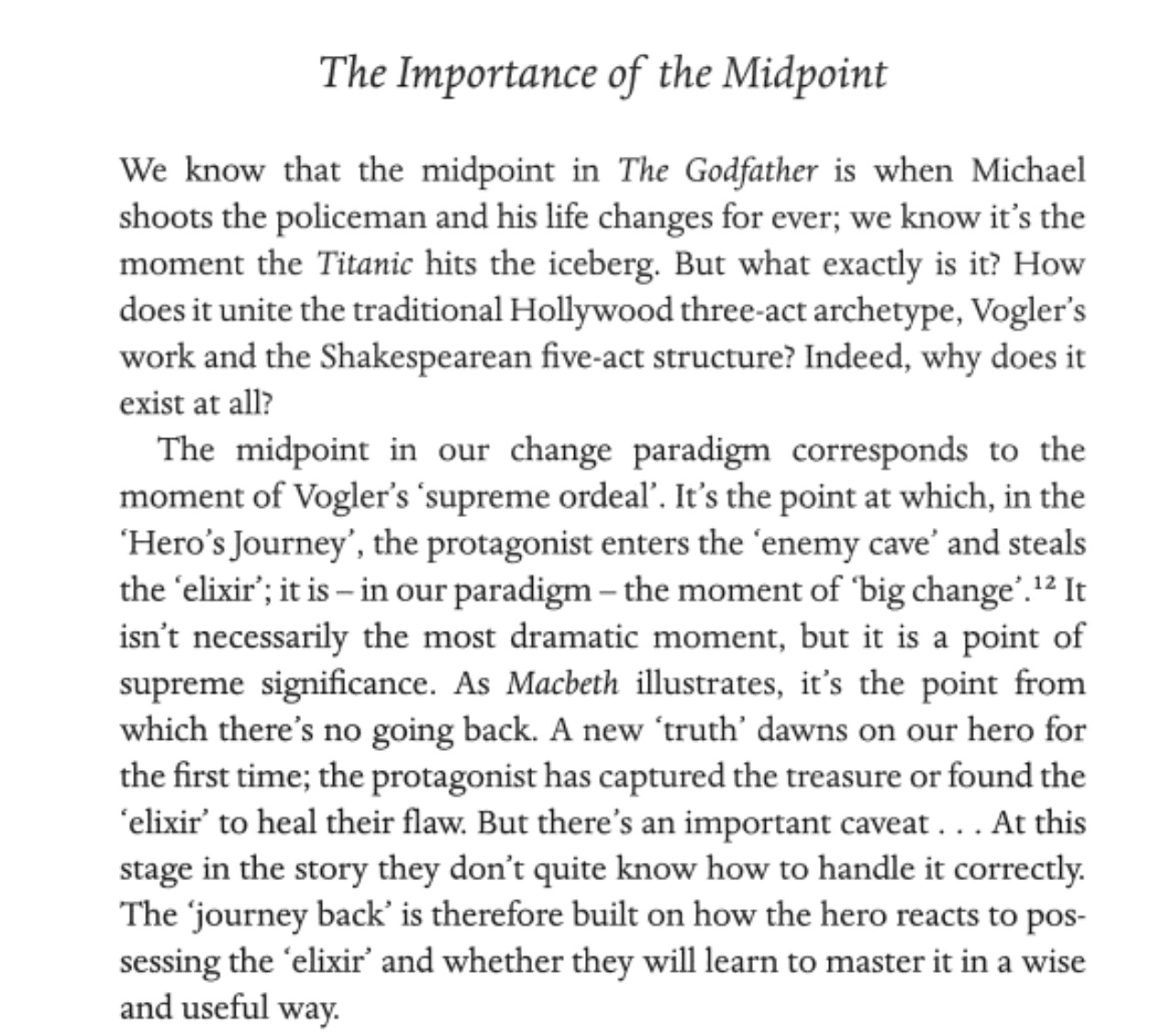 This week I watched Darkest Hour (2017) with Gary Oldman and the midpoint shows Churchill at his lowest in confidence when Roosevelt advises him the Americans cannot substantially help the British in 1941, and there is the sense that Western Europe is on its knees capitulating nation by nation daily and Britain is quite alone. Churchill's voice breaks during the call.

I ransacked the tried and true movie repertoire of Tom Hanks to find an upstanding classic and watched The Road to Perdition (2002). It's a perfectly executed story, thrilling for a writer to watch the way in which everything is set up with such economy visually and is resolved with such aplomb. My writers are very familiar with the way a paradox energizes a story and here it is in The Road To Perdition. Mike Sullivan is a good father and husband, but also has a job that requires him to be a violent killer. The film exploits this ruthlessly.

Hanks - who must surely have a connoisseur's nose for story said of the script, "At the moment we're dropped into the story, it is literally the last day of that false perspective."

At the midpoint of the movie, we find Mike Sullivan sat down in the hallway of his house, stunned to find his wife and child murdered. A perfect midpoint. Nothing can ever be the same and he is at an all-time low.

If you reverse engineer this, I think you may have a clue as to how to find a story. Find the major, life-changing setback, and build around it (using The Novelry's Five F's of structure which you will find simply explained in any of our creative writing courses.)

This virtuosity caused me to reshuffle my notes and consider - what is the thing which truly severs my main character's relationship with who she was 'playing' and compels her to find the strength to undergo a metamorphosis drawing on her deepest values?

Hmm, I thought there are a few blows she endures...

Ok, where does she cry?

I think you're probably not going to have your character crying more than once in a book so this simple test - the 'Kleenex Test' shall we dub it - should help you locate the midpoint.

But let's check the theory in fiction.

I scrolled through the book to the exact middle of it mathematically. Here we have Pride meet Prejudice, the pledge of the premise of the book is fulfilled - when Elizabeth refuses Darcy with harsh words and she cries. Note -

'The tumult of her mind was now painfully great'

Elizabeth felt herself growing more angry every moment; yet she tried to the utmost to speak with composure when she said:

“You are mistaken, Mr. Darcy, if you suppose that the mode of your declaration affected me in any other way, than as it spared the concern which I might have felt in refusing you, had you behaved in a more gentlemanlike manner.”

She saw him start at this, but he said nothing, and she continued: “You could not have made the offer of your hand in any possible way that would have tempted me to accept it.”

Again his astonishment was obvious; and he looked at her with an expression of mingled incredulity and mortification. She went on:

“From the very beginning—from the first moment, I may almost say—of my acquaintance with you, your manners, impressing me with the fullest belief of your arrogance, your conceit, and your selfish dis- dain of the feelings of others, were such as to form the groundwork of disapprobation on which succeeding events have built so immovable a dislike; and I had not known you a month before I felt that you were the last man in the world whom I could ever be prevailed on to marry.” “You have said quite enough, madam. I perfectly comprehend your feelings, and have now only to be ashamed of what my own have been.

Forgive me for having taken up so much of your time, and accept my best wishes for your health and happiness.”

And with these words he hastily left the room, and Elizabeth heard him the next moment open the front door and quit the house.

The tumult of her mind, was now painfully great. She knew not how to support herself, and from actual weakness sat down and cried for half-an-hour.

I teach from this textbook great novel substantially in The Ninety Day Novel course. Does it meet the 'Kleenex Test' at midpoint?

At precisely half-way through the 66,019 word novel, after the rape Lucy says this of Petrus:

'I can't order Petrus about. He is his own master.'

Given the post-apartheid setting this is a cataclysmic change in social politics. It is preceded by David Lurie's reaction the rape of his daughter and we find this passage at 30,935 words.

'The events of yesterday have shocked him to the depths. The trembling, the weakness are only the first and most superficial signs of that shock. He has a sense that, inside him, a vital organ has been bruised, abused - perhaps even his heart. For the first time he has a taste of what it will be like to be an old man, tired to the bone, without hopes, without desires, indifferent to the future. Slumped on a plastic chair amid the stench of chicken feathers and rotting apples, he feels his interest in the world draining from him drop by drop. It may take weeks, it may take months before he is bled dry, but he is bleeding. When that is finished, he will be like a fly-casing in a spiderweb, brittle to the touch, lighter than rice-chaff, ready to float away.'

So, the midpoint - the rape of his daughter which he attends in a state of impotence - is notionally more or less the midpoint but perhaps not as precise as in a screenplay where every second counts.

One more test? The Great Gatsby, of course.

'He had passed visibly through two states and was entering upon a third.

After his embarrassment and his unreasoning joy he was consumed with wonder at her presence. He had been full of the idea so long, dreamed it right through to the end, waited with his teeth set, so to speak, at an inconceivable pitch of intensity. Now, in the reaction, he was running down like an overwound clock.'

At precisely half-way in the text, the quotation above is preceded by this:

'I could have sworn I heard the owl-eyed man break into ghostly laughter.'

What interests me with the rendering of the Midpoint in fiction novels is this - the theme of the book is at this locus, halfway, and pinned to its belly button.

Almost immediately after that, it's devastating effect on the main character who unravels is served.

If you're writing first draft, write to know the story, then before second draft, use The Big Edit to get your big theme and storyline down to sentence by sentence style ordered with all your ducks in a row.

'The Editing Course is a safe homecoming for writers who've been sailing the choppy seas of the first draft. It's both pragmatic and inspiring - from how to lay out a manuscript for submission, to interrogating structure, dialogue, characters, sentences, words, hook...I know that, once I've completed it, my manuscript will be as professionally executed as it can be. And here's a weird thing - I shall be using the Editing Course when I construct my next novel. It's the only 'reversible' course I've ever encountered!' Susan Nott-Bower.

If you're on second draft, have a think about the theme, and the effect of the theme at the midpoint.

Director Sam Peckinpah talked about how he always looked for a 'centrepiece' on which to hang his story.

If you're about to write a novel, start with the midpoint and the action which devastates. That's the place to begin to build your world around. So much that is great in fiction is built on the site of an old wound.

At The Novelry we offer writers tools, not rules. If a tool like the midpoint works for you, great. But writers are an unruly lot... so choose what you use. Try one of our novel writing courses today.

The best position for innovation is one of education. Know why you're breaking a convention before you break it.