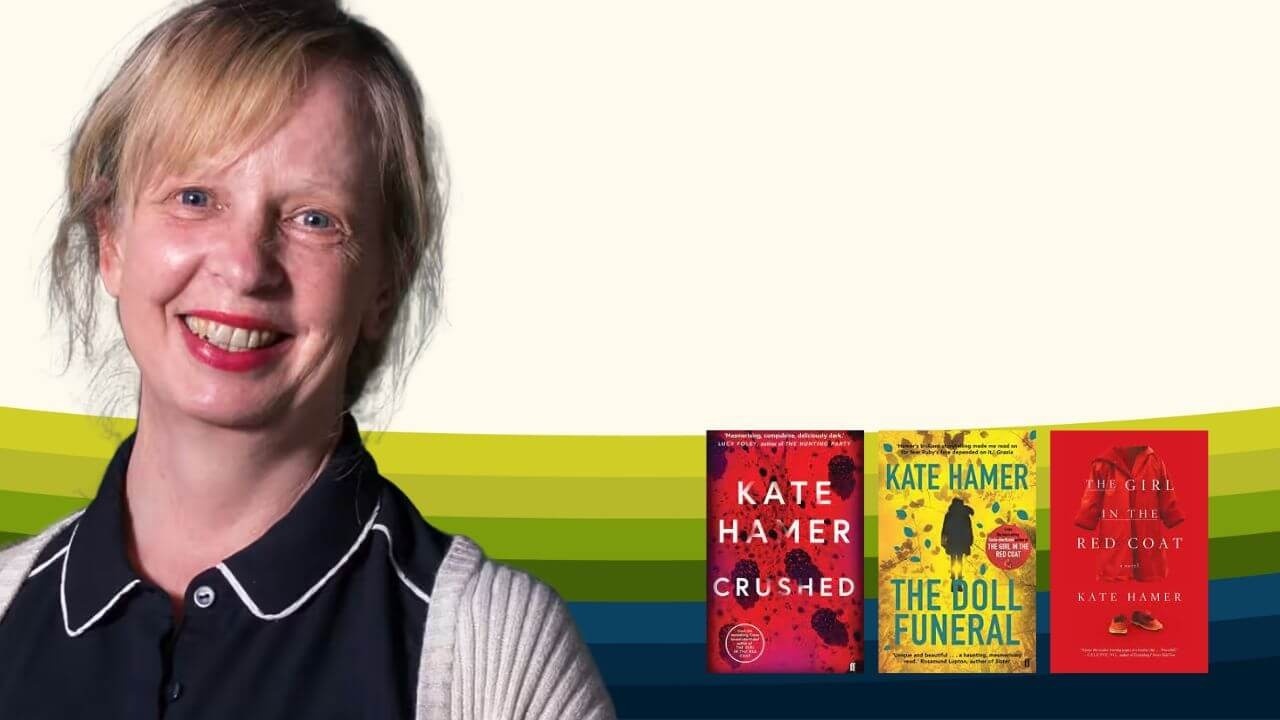 The bestselling author of The Girl in the Red Coat, Kate Hamer explores the story starter of fairy tales. Fairy tales are filled with potential to inspire all kinds of new and intriguing stories – Harriet Tyce wrote an article for us about how they’re often at the heart of the ideas behind great thriller stories, for example. That’s why fairy tales are also where the magic of our Classic course begins, the course designed to help writers find the story they're meant to write, or possibly afraid to write...

For this article, Kate Hamer spent some time considering the fairy tale imagery that is woven through her own writing.

Why do writers write?

As ever I aim to get to my desk by 9.30 am – the time I used to start work in my job. Sometimes, I admit I’m late, the irony being I’m probably a whole lot harder on myself about that than any boss I’ve ever had would’ve been.

So maybe the time of starting and finishing is sometimes a little *cough* flexible, but somehow there is never a question mark over the fact there IS a start and finish time. Only recently in this new reality has it occurred to me to question, why? Why on earth do I – we – have this compelling urge to take to our notepads and computers and spend our time building worlds and people out of thin air?

Like I said, maybe it’s lockdown making me think about things I would normally take as read.

Of course, these days I could say writing is what I do for a living, that’s what drives me to my desk every day, and that would be true. But that certainly wasn’t always the case.

I had to write whenever I could

My first novel, The Girl in the Red Coat – plus numerous short stories and other, abandoned, fragments of novels – were written while I was working and in snatched times all over the place, many years before the publication of that novel. As with everything else, I wrote The Girl in the Red Coat on trains, in dentist’s waiting rooms, in hospital waiting rooms, in Cardiff Central Library, although mostly it was done sitting on my bed at home, my little netbook balanced on a pillow.

I wrote feverishly, sometimes getting up several hours early so I could put time in before work. I had many questions that ran through my mind constantly looking for answers – about the plot, why a character did this or that, how they would feel in a certain situation. The one question I didn’t stop to ask myself was, WHY, why am I doing this? In my downtime I could be going for a pleasant walk or sipping a margarita in the garden or cleaning out that airing cupboard where the things at the back hadn’t seen the light of day for maybe a decade (well, perhaps not that one).

In amongst all the other questions, the ‘why’ one never occurred to me. I simply ploughed on not knowing if it would get published and if anyone aside from my partner and a few close friends would ever read it.

The one question I didn’t stop to ask myself was, WHY, why am I doing this? In my downtime I could be going for a pleasant walk or sipping a margarita in the garden or cleaning out that airing cupboard where the things at the back hadn’t seen the light of day for maybe a decade.

This burning desire to tell stories, where do we get it from? I haven’t met anyone who puts pen to paper that doesn’t have it. What compels us to shape the world into stories, to people it, to make things happen to them, to feel that rush when you know you’ve got the ending that’s right?

The influence of childhood stories

I was bought up on fairy stories.

Not the Disney kind, I had an ancient Grimm’s Fairy Tale book (that I still possess) with the proper blood-curdling tales in them. It was all there – murder, kidnap, abandonment, assault… the list goes on. However much it was wrapped up in fairy princess colours, I knew in my eight-year-old soul that these were dangerous stories – and that’s why I loved them.

Even then, Sleeping Beauty kind of irritated me. She seemed so passive lying in her glass coffin, waiting for the kiss to wake her up. Years later, I was surprised to read feminist deconstructions of the tale saying much the same thing.

Although another one I really loved – Rapunzel – could be said to be slightly similar. A girl is confined to a tower by a witch and is visited by a prince who climbs up through the window by climbing up her hair.

I had an ancient Grimm’s Fairy Tale book (that I still possess) with the proper blood-curdling tales in them. It was all there – murder, kidnap, abandonment, assault… the list goes on. However much it was wrapped up in fairy princess colours, I knew in my eight-year-old soul that these were dangerous stories – and that’s why I loved them.

I think now the reason I loved it so inordinately was the thrillingly dangerous atmosphere of the story. She is imprisoned, she is cheating her captor by having a forbidden visitor and now the witch is calling from the foot of the tower, ‘Rapunzel, Rapunzel, let down your hair.’ Will she be discovered?

The tension was unbearable however many times I read it. I was with Rapunzel in the tower. I could see the witch on the ground and the thicket of forest that surrounded them. (I read years later that in the original folk version the witch only discovers the truth about Rapunzel’s visitor when her belly starts to swell).

How fairy tales influenced my characters

These tales have never gone away, like early influences often don’t.

You can see them everywhere: in the stories I tell, and the characters and imagery within them.

Rapunzel played her part in my characterisation of Phoebe in my latest novel Crushed.

Phoebe is isolated in a tower, except in this instance it’s a grand house in modern-day Bath with a narcissistic mother. A long hot summer, a few teenage obsessions and toxic family situations later, her whole life spirals out of control.

It may be a modern translation but the darkness of the original certainly flowed through my veins when I was writing about it.

Little Red Riding Hood and The Girl in the Red Coat

The imagery of this tale played a big part in my first novel, The Girl in the Red Coat. I had such a clear picture of the central character, eight-year-old Carmel, standing in a forest, lost and alone, and wearing a scarlet coat.

I didn’t know why she was lost, or how, and the mission of the book was, in many ways, to find out.

But writing works in strange ways. It was only after I’d finished the first draft and glanced up to an old Victorian print of Red Riding Hood in our hallway that I realised I’d written a version of that very tale. Carmel is a missing child; she has strayed from the forest path and is now lost and threatened by the wolf. How could I have not realised the influence of the original Red Hood?!

Writing works in strange ways. It was only after I’d finished the first draft and glanced up to an old Victorian print of Red Riding Hood in our hallway that I realised I’d written a version of that very tale.

My point is, I guess, how much writing comes from a subconscious place, a gut feeling that we ignore at our peril. In my experience, anyway, it’s at its best and most enjoyable when I follow that instinct down the rabbit hole.

I don’t plot in a detailed way, though I know a lot of people find plotting intricately really helps them. I tend to have the opening of the novel (which is often based on a strong sense of atmosphere), one or two large plot points along the way and then the ending – certainly the last one or two sentences.

Writing comes from a subconscious place, a gut feeling that we ignore at our peril.

I think if I plotted everything out beforehand, I would end up not wanting to write the book. Though I admit sometimes when I’m stuck on a knotty plot point, I’m green with envy at the thought of one of those beautiful plot charts – especially the kind drawn in lovely circles and with loads of things joining up with each other. I long for one of those then!

The author of the Neapolitan trilogy that features the lives of two women – lifelong friends – so vividly, Elena Ferrante, wrote that at the age of fifteen she started putting ‘brave girls who were in serious trouble’ at the centre of her stories. That really appeals to me.

When I look at all the fairy tales I really loved, they are all ‘brave girls in serious trouble.’

I often used to read Roald Dahl’s reimagined fairy stories, Revolting Rhymes, to my daughter when she was little. The one about Red Riding Hood always made her giggle, every single reading without fail.

She whips a pistol from her knickers.

She aims it at the creature’s head,

It makes me laugh too – still.

Writers must keep their faith

Whenever people ask advice on writing, there’s one thing that always springs to mind to offer: ‘keep the faith.’

Keep the faith to keep writing in those snatched moments, in between work and school runs and whatever else. Keep your novel burning inside you and don’t let it be doused out.

You may not figure out WHY you’re compelled to do it, but that doesn’t mean the compulsion’s not there.

These days I try and write every day, except Sundays, because I’m a believer that in editing you can do anything. I splurge onto the page with the knowledge that I can return to it later and edit, or keep pressing on the delete button until it’s all gone.

At the moment, I’m on my fourth novel and I remind myself to keep the faith all the time, just like I’ve had to do with all the others. Sometimes that’s hard but there’s got to be something about storytelling – the why – that gets us up and at our keyboards and ready to go all over again until somehow this feeling, this atmosphere, this amorphous thing in our minds has taken shape on the page and the characters are popping up and doing their own thing even.

And I know I’ll do it again after this one, and again. The harder question is why, but the closest I’ve ever come to it is ‘brave girls’ who are in serious trouble.

In the end though, perhaps it really doesn’t matter, it’s just lockdown introspection.

It’s keeping the faith that matters.