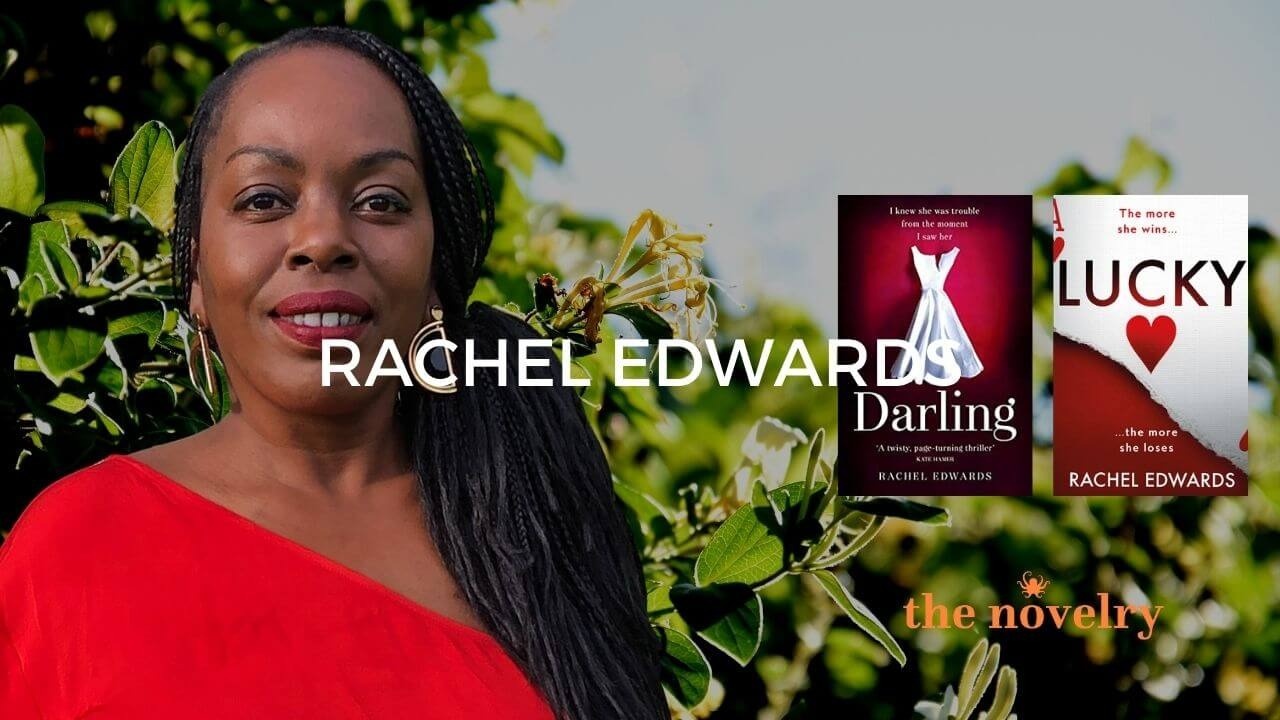 From the Desk of Rachel Edwards.

I am between novels. This was to be an open-ended rest, but it has already become a pregnant pause. Despite myself, I have begun gestating: ripening with seeded notions; pulsing with poetry and plot; hoping to nourish a cluster of characters with vital, fluid ideas; contemplating the long labour ahead to deliver what so many call a ‘book baby’.

My second novel, Lucky, has just come out, on 24th June 2021. A moment’s elation, then a feeling of being spent. I am lighter, unburdened.

Then again, drop writing fiction for too long and I might feel untethered. As I hold the hardback reality of my book in my hands, I already glimpse another hovering, a shadow on the periphery of my imagination. ‘Too soon?’

With my debut, Darling, I flung myself headlong into writing it after my characters started to whisper, then, in the run-up to the EU Referendum, to shout. Their haranguing was enough of a catalyst to ‘just bloody do it’. I did not come up for air (and edits) for eight months. Living with two first-person voices going at each other in my head day and night actually felt closer to how I had imagined being possessed than being pregnant. Once my debut was signed off, I experienced such a high that I wanted to soar straight on to the next book. Hours later, I crashed and went to bed for two days.

I broke off writing fiction for some weeks, producing only a few articles, doing radio. This respite from that intensity of engagement was critical. Generating a book on a laptop comprises more than a marathon of finger-tapping; for this battle with oneself it helps to be fighting fit. Stiffened by the months at my desk, I started exercising more, drank less, revitalised my diet. As the days passed, I was starting to scribble down the odd line or phrase on envelopes and scraps of paper and so knew it was time for… the buying of the New Notebook.

For me, this exotic item of stationery is tool, talisman, and statement of intent. The handbag-sized jotter will be carried everywhere including to my bedside and, in the final days of a novel, to meals (or rather, the meals come to say hi to the Notebook, joining the coffee and wine prison-visiting the Laptop). You do not buy one lightly.

Add to that the general stocking up, buffing and flexing, and all manner of inventive procrastination that I try – and fail - to get out of the way beforehand. Still, the faff steadies my focus. It is the equivalent of the final rituals before climbing the steps to the diving board.

That is the image that pertains, for me, when starting a full-length work. My writing routine is not one; it is obsessive, almost fully immersive in the closing stages. Writing can take over, when it is working, and I choose to let it.

To start a new book is to jump forth and go under, not knowing when you will surface. Creatively, I live for this total submersion.

Lucky satisfied that need, in the end. Exploring online gambling and the risks we all take to survive, it was to be my second anti-racist book of thrillerish pace. I leapt in, only to resurface two-and-a-half years later. I stopped and started until I hit my flow; the writing did not pour out of me in the manner of that very first livid torrent, but I stand by the harder-won result.

In recent weeks, sensing the slow but sure crescendo of a book calling me to write, I have been summoning reasons to delay Book Three: just until I’ve sorted all the rooms in our home; until society has unlocked for longer; until I have replenished body and mind; until I have picked and pressed the still-green apples; by then, surely, I should be ready to push back the walls and put writing at the centre of my world once more…

Until the other Monday. The day after the World Cup Final, with its deluge of racial abuse on Twitter, floored me. A mild bug and severe horror left me unable to do much more than rest in a darkened room, rallying enough later to tweet condemnation, report the vitriol and post support from my bed. Later that evening, as the hearts healing Marcus Rashford’s defaced mural appeared in news feeds and after a day of collective action - mass ‘social work’ by the outraged, kinder folk online – the world started to right itself a touch. My final post that night was one of resolve.

Absolute preparedness is a luxury, in these times. In the fight against racism, or for the climate, or indeed with the blank page, acting too soon is rarely soon enough.

The notebook on my desk? Yes, it is new, thanks for asking. Small. The cover features nothing but waves, crested and deep blue, as if inspired by Hokusai.

I am climbing the steps, taking a breath…

Writing, ready or not.

Rachel Edwards was born and raised in the UK by her Jamaican mother and Nigerian father. She is delighted to have been ‘born on three continents at once’ and identifies as many things: a black British author; a Sunday Times columnist; a wife and stepmother; a London-loving resident of the Shires; a now-wistful Europhile and a diehard Soul II Soul fan.

Rachel read French with English at King’s College London. After a graduate stint in publishing, her break into fiction came in her twenties when she was engaged to craft literary sauce for her first editor, Rowan Pelling. She then won a national fiction award from The Arts Council which comprised mentoring from the acclaimed novelist Catherine Johnson. She has since written for many national publications, freelancing for more than ten years until 2016 when she chose to focus full-time on her fiction. Darling, the result, was her debut novel. and her second novel, Lucky, was published on 24th June 2021.

Rachel will be our guest for a Live Author Session on 16th August. All members welcome!