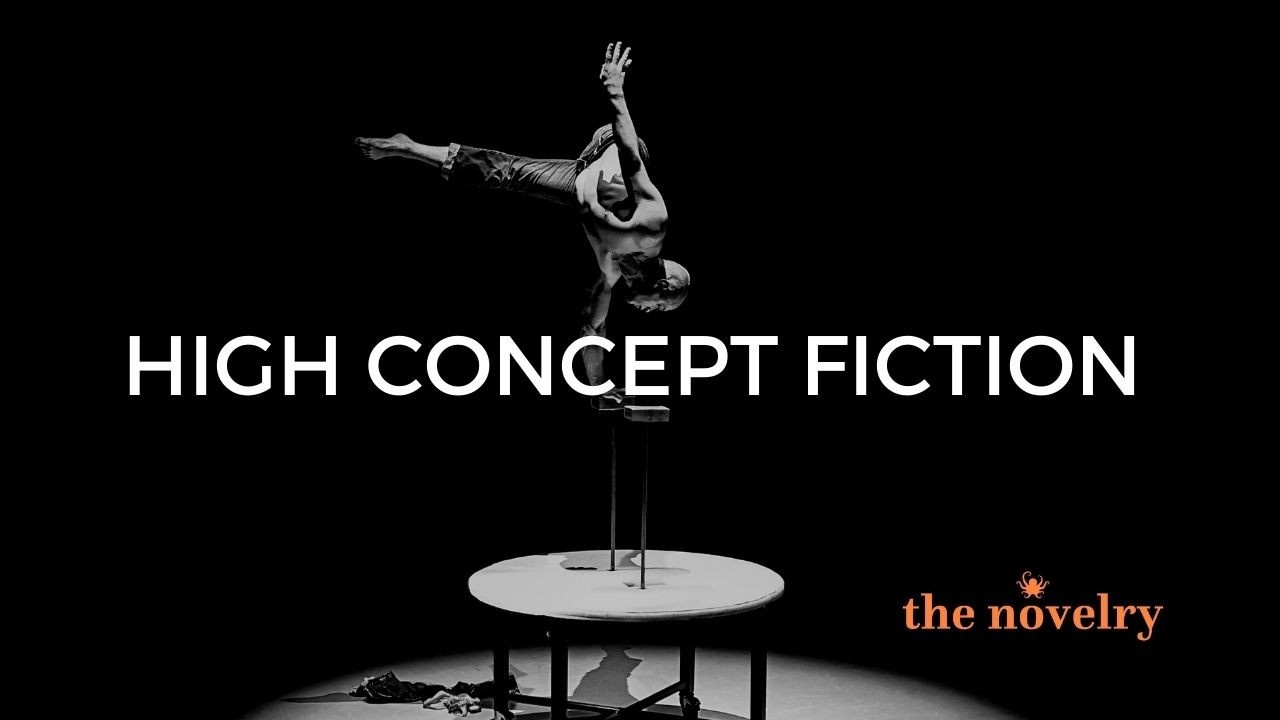 From the Desk of our Tutor Katie Khan.

The publishing industry – and Hollywood (especially Hollywood) – has come to idolize high-concept fiction in recent years. A high concept can be summed up in one line, with a clearly communicable premise. This makes it very commercial because a strong hook, ‘elevator pitch', or a one-line premise is invaluable for an agent pitching your novel to a publisher. It’s also invaluable for your publisher’s sales team to pitch your novel to retailers. And it’s invaluable for the press to describe your novel to readers… And for readers to recommend your book to other readers… Have you seen the film about a shark terrorising a small town? Have you read the love story where we meet a couple on the same day each year? What about the book and film where a billionaire brings dinosaurs back from extinction to create an amusement park?

High-concept fiction is all about premise. If you’re writing high concept, you are writing a story absolutely driven by plot.

Sometimes a film or book is so high concept, the title alone is the premise. Jaws springs to mind again. Alien was famously pitched as Jaws in space. The Power: women develop the power to electrocute men. Sliding Doors. The Girl on the Train. Snakes on a Plane. Sharknado. Jurassic Park. And, if you didn’t guess it above, One Day.

Being a writer who suffers from a smidgen of imposter syndrome, it sounds like I’m praising myself when I declare myself to be a ‘high-concept writer’. But I am; this is how stories come to me. I have notebooks filled with the first inklings of high-concept premises; topline ideas and fractal elements of a situation or world. Many of those initial thoughts start life in my brain as questions: In a world where [x] happens… what if [y] were possible? If your idea comes to you with the words ‘What if…’ I think you’re onto the coattails of something high concept. The One: what if your DNA could match you with your one true love? The Last: what if you were the last survivors of the apocalypse – but discovered a murderer in your midst? I don’t think it’s a coincidence that both of those novels have been optioned by Netflix. In fact, I believe almost every book I’ve mentioned so far has been adapted, or is currently in production, as a film or television series. That’s the strength of a high-concept idea.

The downside of being a high-concept writer is what me and my agent together call the ‘and then what’. Sometimes I will message her and say, holy hell, I’ve just had a great idea… what if dogs could talk? (I have never messaged her this, it’s an illustrative example, but I don’t think she’d be wholly surprised if I did.) Juliet will then sometimes push back at me by saying, ‘okay, and then what?’ It’s amazing how often I only have the first half. In a world where… giant squid rain down from the sky… and then what?

If the first part of a high concept is the cool twist on the premise, I believe the most satisfying ‘and then what’ in high-concept fiction is the part of the story which is character-led. Who will you put into this exciting world? Who will we follow, who will we root for? In a world where dogs can talk… a cat learns to communicate via semaphore. A Spaniel uncovers an unspoken threat to the canine world. A human learns their dog didn’t love them as much as they thought. (Welp!)

To my mind, the character makes up the second half of a high-concept story. In a world where [premise], [person] [does an antithetical thing].

Unlike many authors, I have not yet met a character before a premise. When I hear other much more literary writers say, oh, this character walked into my head fully formed, I tend to scratch my head in bafflement. Meeting a character first? Unheard of. I’m more likely to drop myself into a world and then consider: who would be the most interesting character to put in this place?

There’s no wrong way to write. But with high concept, let me show you what I mean. What do you think came to the writer(s) first: Neo, or the Matrix? Offred, or Gilead? Ian Malcolm (or any of the characters), or Jurassic Park? In a world where women are forced into sexual slavery, a handmaid in the house of a powerful Commander must fight to survive. They may have tweaked her character in the television series to make Offred an active hero, but in the novel, the character of Offred is passive and almost certainly second to the premise. The real meat of Margaret Atwood’s masterpiece is the high concept: what would happen if a regressive, religious movement overthrew the government and forced the United States to become an oppressive state that enslaved women? The story is Gilead; the character is our empathetic viewpoint through which we experience it. We root for her, of course we do. But her character is married to the premise.

Allow me to reiterate something here. Who would be the most interesting character to put in this place? I cannot stress how important this is. Who you choose to marry to the premise is the execution of the book. The novel lives and dies by who you choose. Being frank, I’ve got this wrong before. I wrote a novel I have not yet shown to my publisher because, in the few drafts I wrote, I chose the wrong characters. I could never marry the premise to the character – the plot always felt like a stretch. It came across as a cool idea that drifted away in the telling.

The same question can also be framed like this: in this time, in this place, which character has the most to lose? And who is most at odds with this world?

Think of John McClane in Die Hard: “You're the wrong guy in the wrong place at the wrong time,” to which McClane replies, “Story of my life.” The entire film – and subsequent franchise – would be different if we’d followed an invited guest at the party. Or a terrorist. Or his wife.

The other question I think lies at the root of a successful high-concept ‘and then what’ is something like this. What scenario generates the most naturally occurring tension and conflict between characters?

My advice here would be to look at existing social groups. Imagine if the apocalypse broke out while you were on a corporate retreat with your colleagues. My goodness, the fun you could have writing the office politics and workplace in-speak as the group battle to survive – plus you’d get to kill off the people who never washed up their cups in the office sink!

If you choose to write about characters who have no naturally occurring conflict between them, you will have to engineer it – and I speak from experience when I say it might never marry. The novel will fall flat. The premise will always be better than the book, and no writer wants that.

Romantic couples are a tried-and-tested high concept winner, because there’s either a spark of chemistry between them – or a wealth of emotional history to mine. Good tension! There’s a breadth of high-concept women’s fiction at the moment: take Beach Read (two authors struggling to write their own novels swap and write each other’s for the summer, while also falling in love), or In Five Years (a woman is asked in a job interview where she sees herself in five years, then flashes forward in time to see her life completely transformed with a different romantic partner, and must figure out why).

My first novel, Hold Back the Stars, is high concept: a couple are falling through space with only 90 minutes of air remaining, intercut with their love story on a utopian Earth. Okay, it’s not as neat as ‘a man must stop a bomb going off on a bus’ (Speed), but it’s definitely pitchable in one line. And by putting Carys and Max in a romantic relationship, every single thing they did to try and save themselves in space was informed by the love story the reader saw unfurl on Earth. The relationship between them became the ‘and then what’ of the ‘two people are falling through space’ premise. Will they live? Will they sacrifice themselves for the other? And why are they in space together in the first place?

There’s a shorthand that’s popular with high-concept fiction: X meets Y.  It was when I described my debut novel as ‘Gravity meets One Day’ that it hammered home the high concept, and it sold as such. X meets Y is a very, very popular device in this genre. But be careful what you choose; it needs to be illuminating. And it can’t be a straight match: the two properties have to collide. (Remember ‘Jaws in space’. Or George R.R. Martin’s pitch for Game of Thrones: Lord of the Rings meets the War of the Roses.) ‘The Girl on the Train meets Gone Girl’ does nothing. How does your collision form something new, what spin or twist are you putting on an existing property or genre?

A recent book acquisition making waves on both sides of the Atlantic is Faridah Àbíké-Íyímídé’s debut novel Ace of Spades, publishing this summer with Feiwel & Friends in the United States and Usborne in the UK. It was snapped up by an agent and sold for more than a million dollars. The pitch? Gossip Girl meets Get Out. ‘How can you play the game when the cards are stacked against you?’ It tells us everything we need to know: the setting and characters (an elite school) and the theme (race and privilege). I cannot wait to read it.

The final thing I’d note about high-concept fiction is its singularity. I didn’t Google any of the one-line premises or loglines I’ve included here; I wrote them from memory. A decent high-concept story can usually be described in a similar way by many readers, because it is so singular in its vision. It’s rare that the plot of a famous 1980s high-concept movie (‘a robot is sent back in time to kill the leader of the Resistance before he is born’) would be described as ‘a love story about a man sending his father back in time to impregnate his mother, while they’re hunted by a robot’. Both of those are about Terminator, of course. But you’d have to be very contrary to try and pitch the second!

Write your novel with the wonderful Katie Khan as your co-pilot when you join us for one of our Book in a Year plans.