How to Write Clean, Good Prose 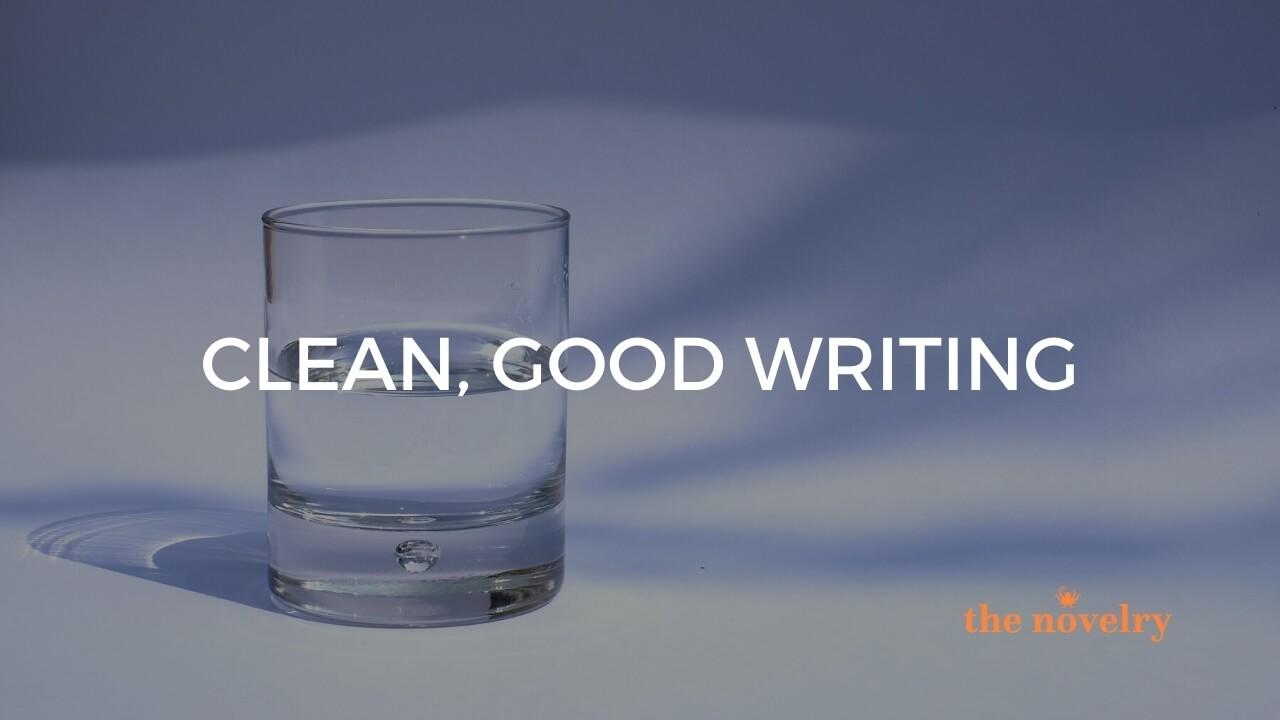 From the Desk of Katie Khan.

As I tackle a new draft of my latest novel, I’m confronted once again by my own unpolished prose sitting ugly on the page, trying too hard.

It’s true that in many first drafts, the story and characters can feel thin and under-written; often, the problem with prose is the exact opposite. It’s over-written.

We have the privilege of seeing many writers’ work in progress at The Novelry and so I know many of you fall prey to the same urge. We think our way into the scene, growing our wordcount by describing every minute movement or emotion, until the page is littered with characters turning, looking up, looking down, walking to the door, turning back, lifting a hand in farewell, clutching their stomach… not to mention their hearts fluttering and pulses racing as they describe agonies of fear and pain…

Feelings and movements are the number one fingerprints of over-writing. I have a few suggestions about how and why to excise them from your writing, and some tips for how to put more sophisticated prose in its place.

When it comes to writing movements, less is more.

Imagine a scene set in a house.

The scene follows Jeanette, who wakes up in the morning, brushes her teeth in the bathroom sink, and drinks a cup of tea leaning against the kitchen cabinet, before heading off to work. What we don’t need to show is Jeanette walking from the bedroom to the bathroom, then sauntering slowly down the stairs to the kitchen, bending down to put on her shoes and finding her umbrella in the hallway, before closing the front door, turning the key and trudging off down the path. (Phew! Did you feel the pace of that paragraph lag?)

This is a character walking around a domestic setting we all know, doing a daily routine we all do, and we can absolutely gauge the flow without Jeanette having to do a million movements in-between. Cut from the bedroom to the bathroom, the kitchen to the office. I guarantee the reader will be able to follow. Even better, start the scene in the workplace, where I’m guessing the action really happens. (And if you really, really want to include these detailed movements, you’re likely writing a literary character study that relishes in the mundane minutiae of the everyday, and for it to be effective you absolutely must include dissonant details to give Jeanette’s dull, predictable movements some life.)

You can get away with very little movement in contemporary commercial fiction. Trust me.

Because the more we describe actions and movements on the page, the more the characters appear as marionette dolls. She looks up. She looks down. She gazes into space. She lifts the teacup to her mouth.

And the more the characters appear as marionette dolls, the more we draw attention to ourselves, The Author, pulling the strings behind the scenes. The artifice of the novel is exposed.

And the more the characters appear as marionette dolls, the more we draw attention to ourselves, The Author, pulling the strings behind the scenes. The artifice of the novel is exposed.
—Katie Khan

The novel is now a puppet show instead of a live, flickering reel of images created by us and projected directly into the reader’s brain. With our jauntily moving marionette dolls, we have failed.

Search for ‘walks’, ‘moves’, ‘turns’, ‘looks’, and any other variation thereof in your manuscript, then cut like the devil.

The reason novels were so thick for so long was that people had so much time to kill. I do not furnish transportation for my characters; I do not move them from one room to another; I do not send them up the stairs; they do not get dressed in the mornings; they do not put the ignition key in the lock, and turn on the engine, and let it warm up and look at all the gauges, and put the car in reverse, and back out, and drive to the filling station, and ask the guy about the weather.
—Kurt Vonnegut

When it comes to writing feelings, less is definitely more.

Almost every early draft of almost every writer’s novel has a whining hero or heroine who feels bad. Who freezes. Who is in pain. Who quivers and shivers or hugs themselves, distraught. But if they start the story complaining, how will they handle the trial we’re looking forward to in the story? And can we bear to spend 300 pages in their company if they’re whining at the outset?

Last year I sent Louise, to my shame, a scene in which a character who is afraid of the dark steps out into the night for the first time. She was trembling. (Not Louise! Though I expect Louise was, too.) She exhaled at least a few times, turned dizzy, clutched something (a lamppost, perhaps? And did she inhale, or did she ‘catch her breath’? I bet you can guess the answer). Her heart was tap-dancing against her ribcage. (I can only apologise.)

Oh, the shame. That scene, rightly, is now covered in potato peel and coffee grounds in the dustbin of fiction.

Just like our marionette dolls jerking their articulated limbs around the stage, over-emoting in the prose only makes the emotion shallower. Once again, The Author is exposed, telling the reader what to feel from the outside. The irony is that if you understate an emotion, the reader often fills it in with their own imagination and experience. They are walking, metaphorically speaking, in that character’s shoes. They feel what the character feels from the inside out.

To be human is to know grief. To know fear. To love and to hate, feel heartbreak and loss, loneliness, or joy. You can understate all of these in fiction and yet the reader will feel them tenfold.

To be human is to know grief. To know fear. To love and to hate, feel heartbreak and loss, loneliness, or joy. You can understate all of these in fiction and yet the reader will feel them tenfold.
—Katie Khan

For me, a master of discreet emotion is American writer Siri Hustvedt. Take this heartrending depiction of a marriage on the brink from her 2003 novel, What I Loved:

Under our love making I felt a bleakness that couldn’t be dispelled. The sadness was in both of us, and I think we pitied ourselves that night, as if we were other people looking down on the couple who lay together on the bed.
—Siri Hustvedt, What I Loved

That’s it. That’s all you get. No weeping, no clutching each other by the shoulder, no groaning or moping, and certainly no hearts feeling as though they might cleave in two. Later in the novel (no spoilers!), Hustvedt writes grief so beautifully understated it verges on minimalism – and is all the more impactful for it. It’s a masterclass.

Search your manuscript for the tell-tale sign of over-emoting: ‘feel’.

So you’ve cut the over-written movements and feelings. What next?

Of course, you still want to evoke emotion and propel your characters forward in the scene.

You could consider using pathetic fallacy or sympathetic background to evoke the mood of the protagonist: think of the weather in Wuthering Heights, from the blizzard overhead at the first appearance of Catherine’s ghost, to the rattling storm the night Heathcliff runs away. Even the word ‘Wuthering’ is an adjective describing ‘the atmospheric tumult to which its station is exposed in stormy weather’. Dogs, too, are an example of representative characterisation in Wuthering Heights; the traits of the dogs are symbolic of the emotional state of key characters throughout the novel.

Or you could utilise what T.S. Eliot called object correlative:

A set of objects, a situation, a chain of events which shall be the formula of that particular emotion; such that when the external facts, which must terminate in sensory experience, are given, the emotion is immediately evoked.
—T.S. Eliot

It’s shorthand for creating the feeling without directly referencing the feeling. Set a miserable-looking ornament down on poor Jeanette’s bedside table. Or, writ large, look at how Jacqueline Woodson piles up the landscape to evoke the narrator’s mental state without ever saying how she feels in Beneath a Meth Moon:

I sat up front with Daddy, stared at the flat land as we drove. Big sky that I couldn’t look up into without thinking about M’lady and Mama. Green land moving fast toward us, then passing us by. Farms and fields. Whole stretches with nothing at all.
—Jacqueline Woodson

Write a scene where a character describes the field outside their window having just committed a murder. It would be different, wouldn’t it, to a character flushed with the joy of first love, even though it’s the same field…

Perhaps your chapter now feels too short or too thin, the scene too quick?

If I’m over-writing movements and pontificating over expansive from-the-heart emotions, they’re often symbolic of the fact I haven’t quite got enough going on in the scene. It’s likely too linear; remember poor, dull Jeanette walking around her house, or my character stumbling through her fear of the dark at night. The scenes are one-note. They’re flat.

In the words of Kurt Vonnegut: “Every character should want something, even if it is only a glass of water.” What does your character want at this moment in time?

I really like this tip by Fleabag creator Phoebe Waller-Bridge, who believes there should be at least three things going on in one scene at the same time. For example, the scene in which an overheated Fleabag tries to take off her jumper and accidentally flashes her bank manager, while applying for a business loan.

I feel like the more you put on a person, the more real it feels, because otherwise it’s just a conversation about a bank loan. But then if she’s sweaty and she’s under-prepared, and she forgot to put a top on underneath but she needs to impress this guy… When there are three things going on at the same time, at minimum, I think you instantly have reality.
—Phoebe Waller-Bridge

Yes, lovely. I’ll take novelistic reality over a juddering puppet show any day. Now I’m off to cut words from my manuscript and sneak in some of these devices – I hope this was helpful, as we set off on another creative week at The Novelry. 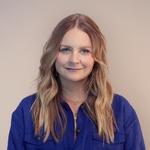 Katie Khan is the author of two speculative fiction novels. Her debut novel Hold Back the Stars was translated into 22 languages and is being adapted for film by the producers of Stranger Things. Katie tutors writers tackling speculative, science fiction and fantasy as well as YA fiction at The Novelry.