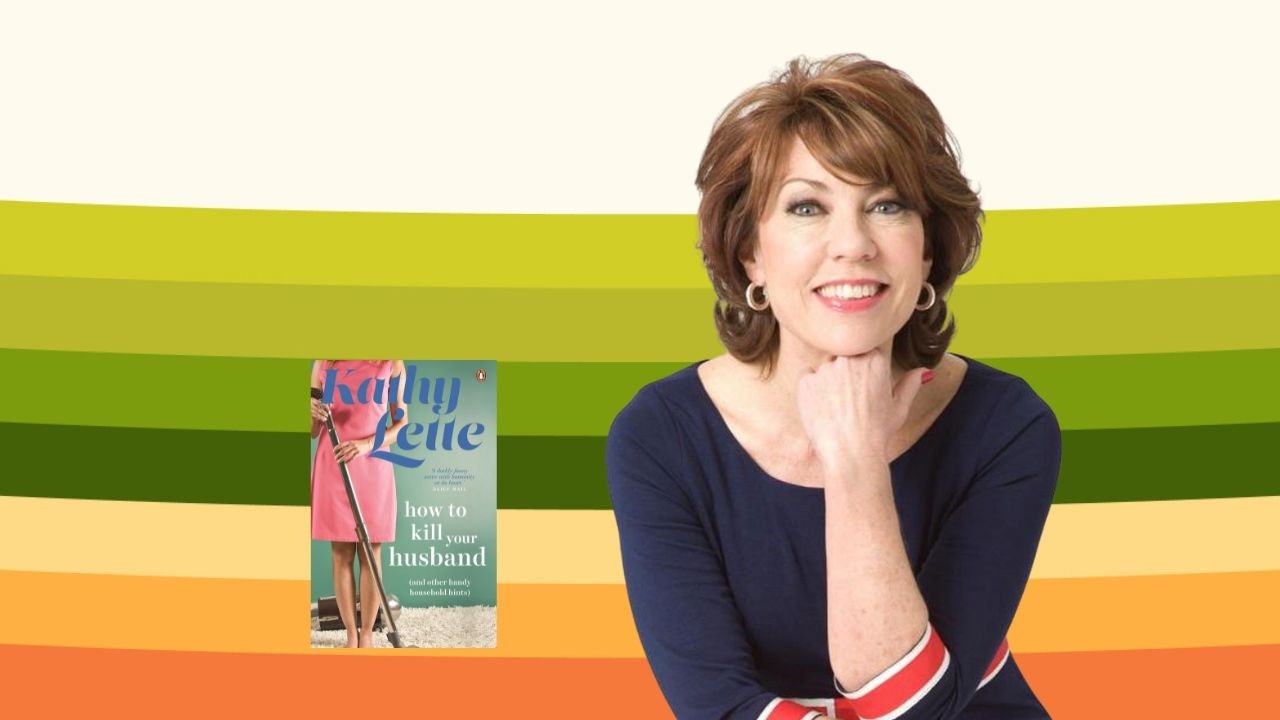 Getting published is a big, noble dream – and if it’s one you hold dear, we sincerely hope it comes true for you. But the industry has all kinds of quirks and challenges that we don’t always hear about. So in this blog post, internationally bestselling author Kathy Lette shares her insights and advice. Kathy published her first novel aged 17. It was called Puberty Blues, and was subsequently made into a major film and a TV mini-series.

Since then, Kathy has worked as a newspaper columnist and television sitcom writer, and published over a dozen more novels, including international bestsellers like Mad Cows (whose film adaptation starred Joanna Lumley and Anna Friel), How to Kill Your Husband and Other Handy Household Hints (staged by the Victorian Opera in Australia), To Love, Honour and Betray and The Boy Who Fell To Earth. Her books have been translated into sixteen languages around the world.

So what has Kathy learned in the course of this enviable, astronomical career? Read on to find out her top tips and always hilarious perspective.

Why I decided to become a writer

As many of you writers at The Novelry will know, the best thing about being a writer is that you get to work in your PJs all day, drink heavily on the job and have affairs and call it ‘research’.

But I principally became an author as it involves no heavy lifting. Except for those writers who lift whole sections of other people’s work and then call it their own. But hey, you can’t have all work and no plagiarism, right?

The best thing about being a writer is that you get to work in your PJs all day, drink heavily on the job and have affairs and call it ‘research’.

But if you really want to be a writer, your most important assignment is to think of a witty epitaph. Spike Milligan’s was: ‘I told you I was sick.’ I think mine will be: ‘Finally – a good plot.’

Why I love being around my fellow writers

I’ve been writing novels since my teens, so have been lucky enough to rub shoulder pads with many of the world’s most inspiring authors.

I’ve done the limbo with Salman Rushdie, waltzed with Julian Barnes and tangoed with Clive James. I’ve gone to a lap dancing club with John Mortimer and prowled funeral parlours with Jessica Mitford. I’ve skinny-dipped with Tom Keneally and body surfed with Ian McEwan. I’ve eaten oysters at the Savoy with Joanna Trollope and downed martinis in New York with Christopher Hitchens. I’ve sung duets with Douglas Adams; accompanied by Procol Harem. I’ve had pyjama parties with Fay Weldon and crashed parties with Ben Elton. I’ve dined with Margaret Atwood, Gore Vidal, Stephen Fry, Jeanette Winterson, Ishiguro and whole shelves of inspirational scribblers. I’ve been drunk under the table by most of them, too.

I’ve basically got a suntan from basking in the reflected glory of some of literature's greats.

In short, writers are my favourite species. Why? Well, having left school at 16 (I always say that the only examination I’ve ever passed is my cervical smear test), books have been my education. Yes, I’m an autodidact – clearly, it’s a word I taught myself. Writers have helped me make sense of the world. And offered me escape from it too.

I’ve done the limbo with Salman Rushdie, waltzed with Julian Barnes and tangoed with Clive James. I’ve gone to a lap dancing club with John Mortimer and prowled funeral parlours with Jessica Mitford. I’ve skinny-dipped with Tom Keneally and body surfed with Ian McEwan. I’ve eaten oysters at the Savoy with Joanna Trollope and downed martinis in New York with Christopher Hitchens.

Grounded by Covid, books became our only means of travel, offering endless flights of fancy.  As Dr. Johnson observed, ‘The true end of literature is to enable the reader better to enjoy life or better to endure it’.

What it takes to be a writer

If you are a budding author, I’d advise you to strap yourself into some kind of publishing simulator to experience the terrors and exhilaration, to see if you have what it takes, because the list of requirements is gruelling.

I occasionally get so sick of my own company that even my imaginary friend gets bored and runs off to play with someone more interesting.

First, there’s the honing of cheerfulness to chat show perfection. Then there’s the mandatory haemorrhaging of charisma at book signings. Then there’s the loneliness of the long-distance punner; I occasionally get so sick of my own company that even my imaginary friend gets bored and runs off to play with someone more interesting.

The challenges of book tours

Worst of all is the dreaded book tour which involves flying hundreds of miles from Dipstick, Ohio, to Buffalo Fart, Wyoming, for a one-minute slot on breakfast radio with a member of the ‘Illiterati’ whose reading material is limited to his bank balance and Instagram posts.

I honestly think there should be an R.S.P.C.W. – Royal Society for the Prevention of Cruelty to Writers. Especially when it comes to American book tours which are an exercise in humiliation. One night in Pittsburgh, I sashayed onto the Town Hall stage and launched into my funny feminist routine about the sex war. But silence reigned. Panicking, I then shot from the lip with my most lethal one-liners. Surely the audience would have quip-lash by now?… Cue slow hand clapping. Desperate, I told even bigger and better jokes – hell I was aiming for a black belt in tongue-fu… But booing ensued. Finally defeated, I shielded my eyes and looked out at the audience. 500 middle-aged white men in suits stared back at me. This was not my normal crowd. Demoralised, I skulked off stage.

‘What the hell happened?’ I asked the organiser.

‘Sorry,’ he replied, ‘but we got your night mixed up with Senator John McCain, who’s touring his memoir.’

The only thing that cheered me up was the fact that the next night, McCain was going to get my readers – feminists, lesbians, breast-feeding mums and GGLGs (Gorgeous Gay Love Gods.) Now that really would have been funny!

If you’re going to be a professional writer, you must also strap on a bullet-proof bra because criticism is an occupational hazard. If there were an Olympic Games for Hypocrisy, writers would win Gold. A glowing review, and we’re sycophantic with praise – ‘Critics! So perspicacious! Such literary taste and intellectual discernment!’ Grateful feelings explode in you like champagne. I once had a glowing review printed on a t-shirt and wore it for weeks. Hell, I had to be restrained from getting it tattooed onto my forehead.

But when we get a bad review, critics become no better than pond scum. ‘Critics! Ugh!’ we whine, ‘Cyborgs that eat human flesh are less alien than bloody book reviewers!’

Why I love writing for women

If I have any gift as a writer, it’s putting into words what women are thinking, but not necessarily saying out loud.

In all my 14 novels and four non-fiction books, women always come out on top.

Because it’s still a man’s world. 100 years since Emmeline Pankhurst tied herself to the railings and women still don’t have equal pay. We’re getting 75 pence in the pound – plus we’re getting concussion hitting our heads on the glass ceiling, and we’re supposed to clean it while we’re up there. Any woman who says she’s not a feminist has kept her Wonderbra and burnt her brains.

If I have any gift as a writer, it’s putting into words what women are thinking, but not necessarily saying out loud.

But we don’t cry about it. No. My only motto is: laugh and the world laughs with you, cry and you get salt in your champers!

The reason I write comic novels is because laughing at life’s adversities is just the way women cope. And yet, I still hear men say so often that ‘women aren’t funny.’ I’ve heard that in every country of the world I’ve ever been on a book tour. Why do some men insist on perpetuating this myth? I think they’re just terrified what it is we’re being funny about. I presume they think we spend the whole time talking about the length of their members, which is not true; we also talk about the width – which after childbirth is so much more important! If a man ever says to you that females aren’t funny, just explain that the reason women can’t tell jokes is because we marry them. Then ask him if he knows why men like intelligent women. And simply reply: because opposites attract.

Other lessons I’ve learned from the world of publishing

After forty years in the trade, what other bookish top tips can I share with you?

I can reveal that ‘Anonymous’ is simply a married author writing about sexual infidelity. And that a ‘ghostwriter’ is nothing more than a shadow of her former self. Oh, and name your cat, ‘Booker’… just so you can say that you have one.

There are also a few technical terms you will need to master. For example, do you know that ‘brontosaurus’ is an anthology of works by 19th-century English sister authors? Then there’s grammatical precision. A double negative, for example, is a complete no-no.

But despite the angst and bad reviews and literary feuds, the best thing about being a writer is that it’s such a cathartic profession; impaling enemies on the end of your pen is the most effective way to exorcise angst. That’s why, when I finally get around to writing a memoir, I have the perfect title: Lette Bygones.

I can’t wait to hear all your book ideas and have a laugh together. See you then. And if you don’t like what I have to say, I’ll simply adopt a non de plume – I’m thinking perhaps Sue Donym.