How to Write a Book Quickly? Go Off Grid. 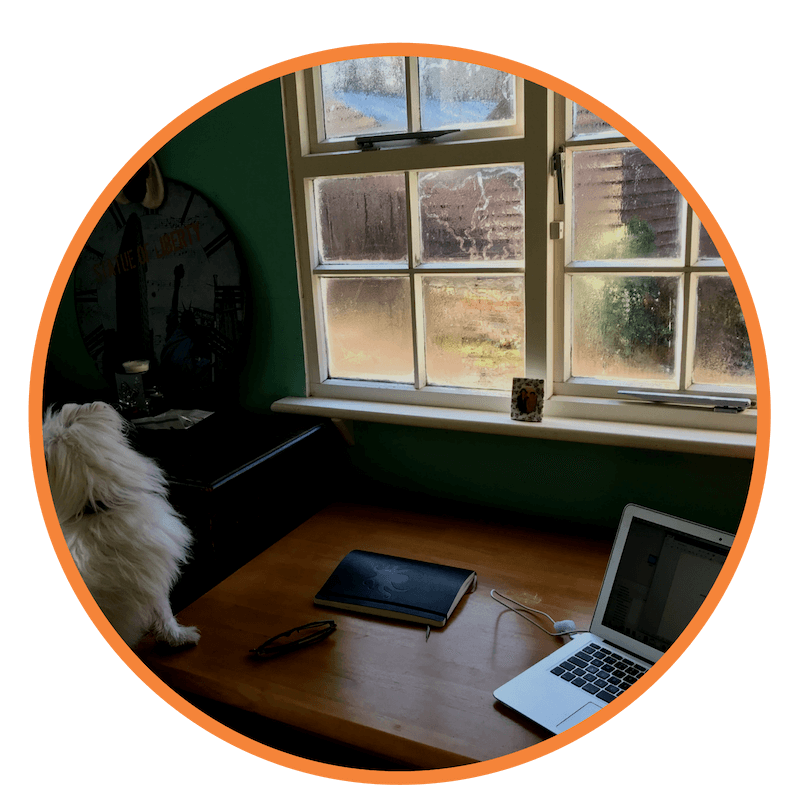 On Monday morning, I asked Siri what the weather was like. Minus Four, Siri told me.

Waving bye-bye to Wifi I went off into the woods to sit in a shed down the track from my mother's house. The heater required assembly. Communicating between woollen-hatted brows and muffled chins, fumbling with our fingerless gloves on, mother and I failed. I plugged it in anyway, it tried its best but it was a poor excuse for a heater.

My little dog admired the ice on the inside of the windows, enjoyed a tryst with an old pair of shoes my mother had thoughtfully left for him, then curled up in an old wicker armchair, nose in tail.

It's a remote and secluded place, no traffic noise at all. My mother doesn't have the internet and her house is at a little distance. She left me the bell she used as a child to tell her father to come in from the nursery gardens for his tea. I was to ring it if I needed her. We were both rather excited about the whole enterprise.

My writing chair was an old institutional office type chair from the 60's, vinyl and iron, which my other had got from her favourite shopping outlet - the skip at the side of the road. It was quite comfortable.

My fingers were so cold, it slowed my writing. At first, I felt conspicuous. Then I felt a sense of peace quite alien to me and wanted to go to sleep like a fairytale princess finding a cottage in a frozen forest. I could have slept for years. But I set about the task I'd been avoiding - really getting into the thick of the novel.

I could do as I did most days and dawdle through the opening chapters or I could plunge into it like a cack-handed chef - butchering and braising and fouling things up before they are in any way edible.

When I first looked at the time an hour and a half had passed! How? Where? It was like being in a parallel universe.

The dog slept unusually for a whole three hours and the chapter was done at 4000 words and I rang the bell. But mother didn't hear me so I walked towards the house and we set her dog barking, then took a turn around the fields together. The only way I could describe the experience to her was as if one had been very constipated for a long time and...

The dog leapt for joy amongst the iced fronds of the meadows and I realized my toes were aching with cold. I'd been sitting there completely engrossed with my extremities freezing on me.

I felt sublime. So that's how it feels to write without beep, ping, ding-dong, brrring brring, knock knock, woof or "Mu-um".

So I have found my most humble little writing heaven.

Highly recommended, going off grid is the new sex drugs and rock and roll for writers.

I'm deep into draft two of my novel and doing the heavy lifting to find the story after a month away from the first draft which was, as Hemingway consoles us, like all first drafts - shit. But I wouldn't be here without it!

I like to take vitamin shots with my reading when I'm raising my game and D2 is such a major step up from D1 it can be daunting; you set yourself a much higher ambition for story. You can have perfectly lovely prose in D1 by the way and D2, but you get brutal about the way the story works in D2. I work to a tight plan. I want robust drama at this point so I read it.

This week I have been reading Sophocles' Theban Plays and gone from there to Shakespeare's Hamlet. It's quite stunning to me how the forthright addressing of the audience with the dilemma uppermost is the same in both. From Oedipus to Hamlet we have story driven by dilemma, and the dilemma is both domestic and political. No shame there, as it's proposed in these works that our behaviour on the world stage is formed by our closest relationships, our blood and kin.

There's no more than a hop, skip and a jump in storytelling method (bring on the bad news!) between Sophocles writing in 403BC and Shakespeare's Hamlet published in 1603. Beautiful turns of phrase are at the service of story packed with plot twists and humour serves tragedy in many lines. How extraordinary this mode of address which endures for 2000 years is then overtaken by the novel form (emerging with Miguel De Cervantes Don Quixote in 1603) which is more singularly immersive, a solo engagement.

At the same time, we have the notion of a personal relationship with God spreading via Protestantism (thanks to Martin Luther in the 16th Century) and with the spreading of the printing press. The doctrine of Sola Fide or justification by faith alone - belief is everything and not works or show - emerges and thereafter we have the development of  liberalism-  a society is composed of individuals with their inner beliefs and desires to be free and the addressing of the masses in story form is flanked by the addressing of the inner being in the novel form.

Remember, as a writer, I address you - either solo or en masse, though when I write novels I am considering the former. Yet if I consider the latter then I am more certain in my storytelling that something must happen and this helps me with the plot.

Yes, your novel should be immersive, that is the prime mover, but it must also have drama. Story first. The difference is - I am making you believe it, not just hear it, but I need you to be moved by the rising water of the dilemma.

Do not sweat this at first draft, simply write the story for you. At second draft, address me, her, him and the masses. You have something to say. Even if - as with last year's big hit, Eleanor Oliphant is Completely Fine - it is apparently humble, on the matter of loneliness. At D2 you will need to think - what shall I tell them? The Editing Course, one of our novel writing courses, will help you nail this from the big theme all the way through to the sentence flow. 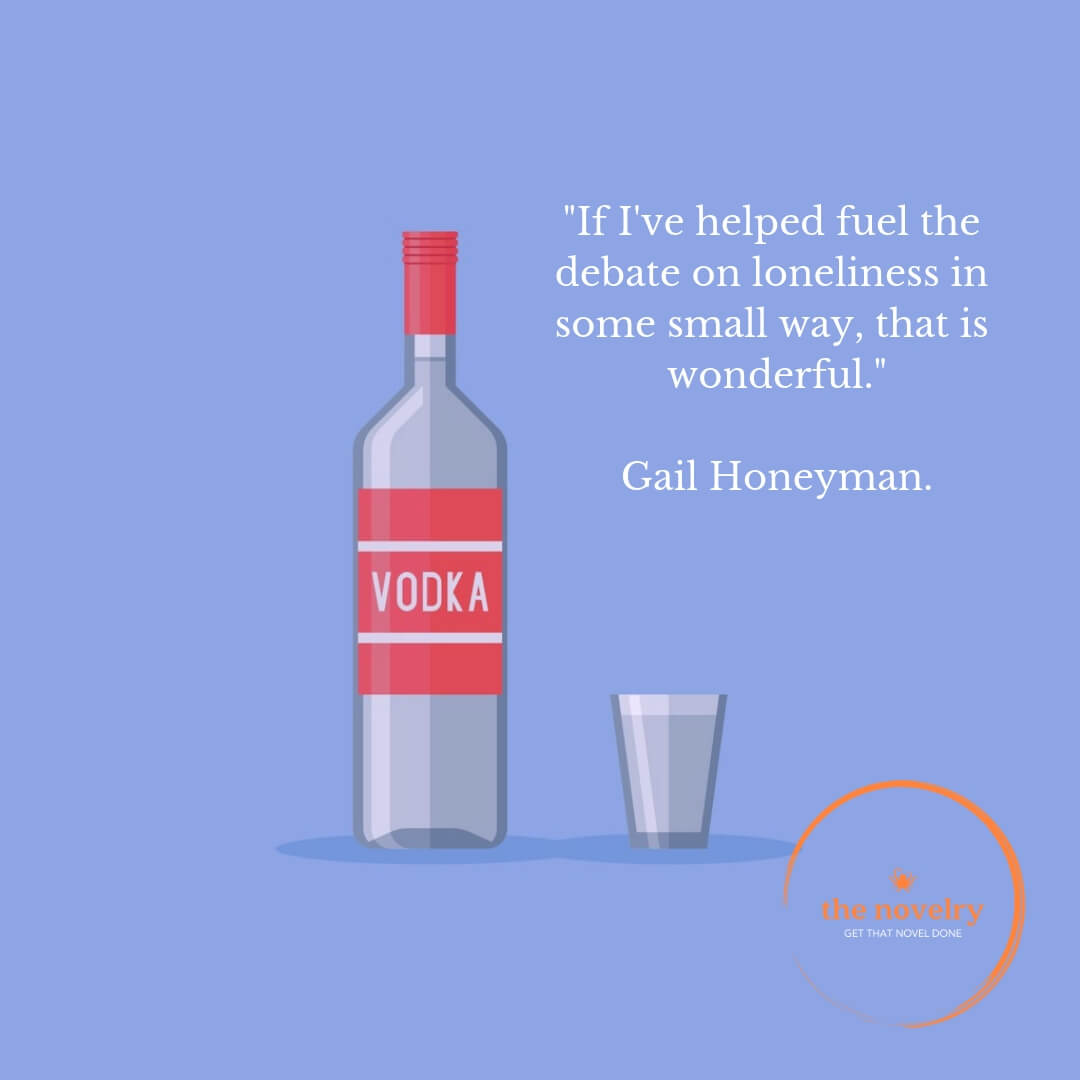 (For the potted version of these posts, follow us on Insta @thenovelry.)