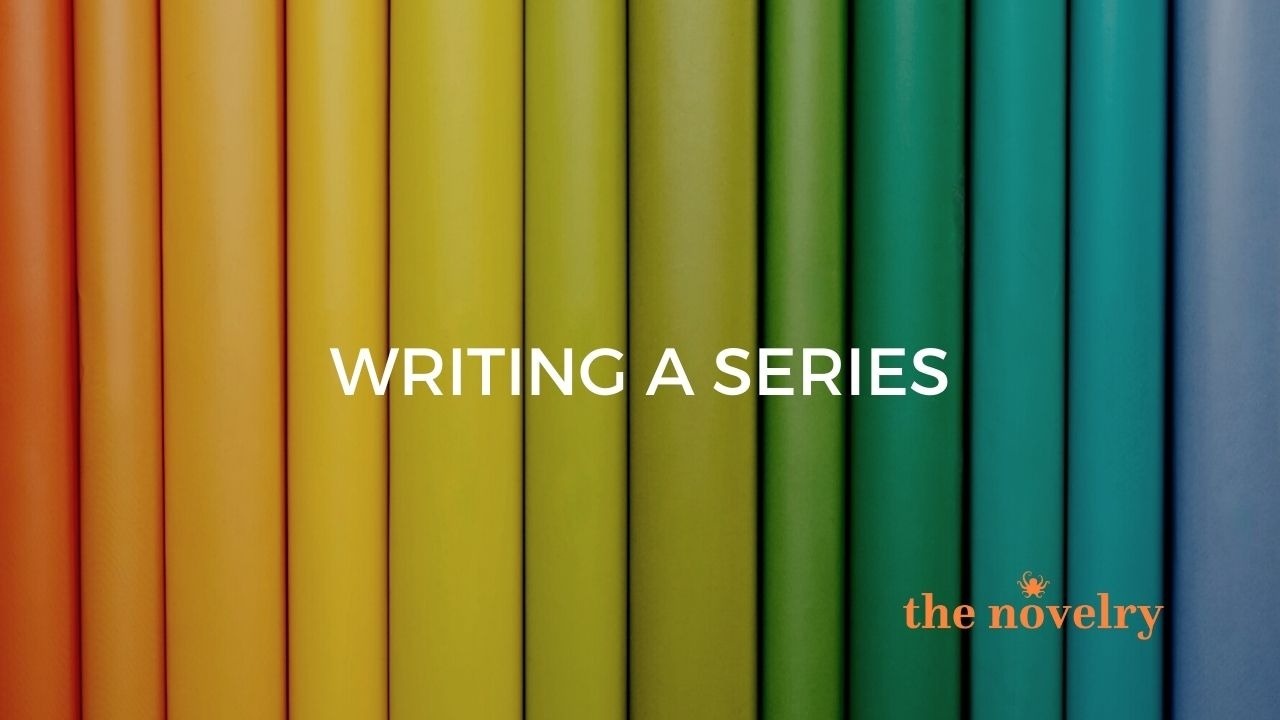 From the Desk of Kate Riordan:

For some of you, the notion of writing a series is enough to bring you out in a cold sweat (I don’t know if I can finish ONE yet!). For others, especially those writing in certain genres, a series might well be a better bet than a stand-alone. Readers of fantasy, as well as children’s and detective fiction, among others, are totally accustomed to investing their time (and money) in a series. And, as a writer, if you can get them hooked on book one, you’ve got an almost guaranteed sale for book two, and so on. In a career with very little security or certainty, the possibility of signing a three or four book deal is pretty alluring. But before you jump in, there is much to consider.

As I see it, there are roughly two different types of series: the sort of epic story which is so complex and sprawling that it requires telling across multiple volumes (think George R. R. Martin’s fantasy series A Song of Ice and Fire), and the episodic kind we see more often in detective series, with a more self-contained story in each book featuring and (mainly) told from the perspective of a familiar, returning protagonist (think Lee Child’s Jack Reacher books or Conan Doyle’s Sherlock Holmes novels). I’m simplifying for now, but bear with me, and I will return to the multiple arcs and complex world-building of the these series which don’t necessarily need to be read in order.

If you’re thinking of writing the first kind - an epic series that definitely does need to be read in order - then it’s worth considering what kind of writer you are. Are you a meticulous planner? Or do you like to see how it goes? Personally, I think there’s something rather masochistic about embarking on an enormous and enormously complicated series without having some idea of where and how it’s going to end, with quite a lot of the bits in between worked out too. A famous example of a planner is of course JK Rowling, who spent five years sketching out the seven Harry Potter books. By the time she was actually writing them, the multi-faceted world of Hogwarts, dementors and muggles was alive and kicking in her head, with Harry’s journey as carefully plotted-out as the Marauder’s Map. She even planned to publish one a year, so that Harry’s fans grew up alongside him, the tone of the books darkening appropriately as they went along. How’s that for forward-thinking? Such a thorough approach to world-building has arguably aided all the various spin-offs that complement the original books. It feels as though Rowling could plunder this creative landscape forever (and who could blame her?).

At the other end of the plotter/pantser spectrum is the aforementioned George R. R. Martin, who is yet to finish the epic series he started, even though the final episode of the HBO adaptation has long since aired (A Game of Thrones is the title of the first book in the series, by the way). The fifth book, A Dance with Dragons, was published in 2011. Number six, The Winds of Winter, is still being written, ten years on (no pressure, George). Martin has referred to himself as a ‘gardener’ rather than an ‘architect’ when it comes to his approach to writing stories. He plants the seed of an idea and sees what comes up. Meanwhile the architect writer (like JK) builds from carefully honed blueprints. Some would argue that the organic approach is more character-led - because you can’t plan their journey until you know them through the writing - and this lends it a more creative air. But there’s a dragon-sized danger with gardening, and that is losing control altogether, with the whole grand project proving impossible to tame and bring to a coherent conclusion. (Interestingly, what many fans disliked so much about the final seasons of the TV adaptation, which took events beyond the point Martin had got to in his books, was that it favoured big-budget spectacle over authentic character resolution. But, you know, at least there was an end.)

Our fantasy and science fiction tutor, Katie Khan, has observed that fantasy series are often funnel-shaped; “the first novel, at the narrow part of the funnel, establishes the character and their problem, then by the end of the novel it tends to open out the world to show a larger “world problem”, which will be tackled in the second and later books (the wide part of the funnel). In high fantasy, this might be the characters becoming aware of and embroiled in the political machinations of different kingdoms about to go to war, or it might be the rise of a dark lord or dark queen; the funnel gets wider and the world of the story gets bigger. The focus often shifts from the personal to the societal, and the stakes increase from ‘save yourself’ to ‘save everyone’.”

It’s a braver soul than me who embarks on a series without some serious planning. I would argue that even the other kind of series - where each book stands alone in terms of its main storyline - requires a good deal of careful thought, too. Your protagonist - whether they’re a PI or a psychopath - needs to be charismatic and complicated enough to keep the reader coming back.

Sure, each of the self-contained plots can be neatly and cleverly executed, but the heart of a series like this is the reader’s affection for, or fascination with, the person leading them through the story’s terrain, whether that’s an Inspector Rebus, a Jackson Brodie, or a Dr Ruth Galloway. The last example there, from the forensic archaeology series by Elly Griffiths, is a great example of this. I enjoy the cases Ruth helps the police solve - I want to know whodunnit and why - but I’m actually much more emotionally engaged in the ongoing ‘will they/won’t they’ scenario between her and married DCI Harry Nelson. There’s a reason the heroes of these series are so often divorced, alcoholic, commitment-phobic, and otherwise troubled. All these ‘flaws’ make them layered and compelling and, as we begin each new story, our fingers are crossed that they’re finally going to exorcise their demons (or just get together with Harry). We want to be on the sidelines as they change and evolve.

Another element of a series that will turn me into a repeat buyer is the world that the writer creates around their returning protagonist. A deftly drawn combination of setting and supporting cast can elevate a series into something truly immersive: a universe as fully-formed and escapist as Westeros. Griffiths’ Norfolk is as memorable a character as Ruth’s wonderful druid pal Cathbad. Similarly, the seedy Edinburgh of the Rebus novels has become a tourist attraction, with walking tours of key locations running all year round. If the surrounding world is vivid enough, a writer might even be able to eschew a returning protagonist altogether. Tana French’s Dublin Murder Squad series does just this, with a different detective handed the reins of each new book. Continuity comes in the form of French’s pin-sharp evocation of Ireland in the aftermath of the Celtic Tiger economic boom, and the murder squad themselves.

Writing a series is to spin multiple plates at multiple speeds. I don’t just mean in terms of plot, either. A series might have an overarching theme, as well as more localised moral concerns in each individual book. TV writers know all about this multi-tasking: they’re frequently required to juggle numerous story, character and thematic arcs so that, if a series flops and is pulled after half a season, it still more or less makes sense and, if it’s a hit, there’s enough spare material in the hems to keep letting it out (hello, secondary characters, skeletons in the closet, and antagonists who keep rearing their ugly heads).

I don’t know if I’ll ever dare write a series but, as a reader, there’s something deeply satisfying about them. The dominance of the kind of limited series we watch on Netflix and its ilk has reset my tastes so that the average 90-minute film now feels rather brief and unfulfilling. I want six or eight hours’ worth now: a nice deep bath rather than a quick shower. Of course, I’m not about to give up reading stand-alone novels, but there’s definitely something irresistible about the idea of falling in love with a new book, only to discover there’s another five (or twenty) where that came from.

If you're writing mystery, romance, historical fiction or a psychological suspense thriller, you'll find Kate a supportive and inspiring tutor.