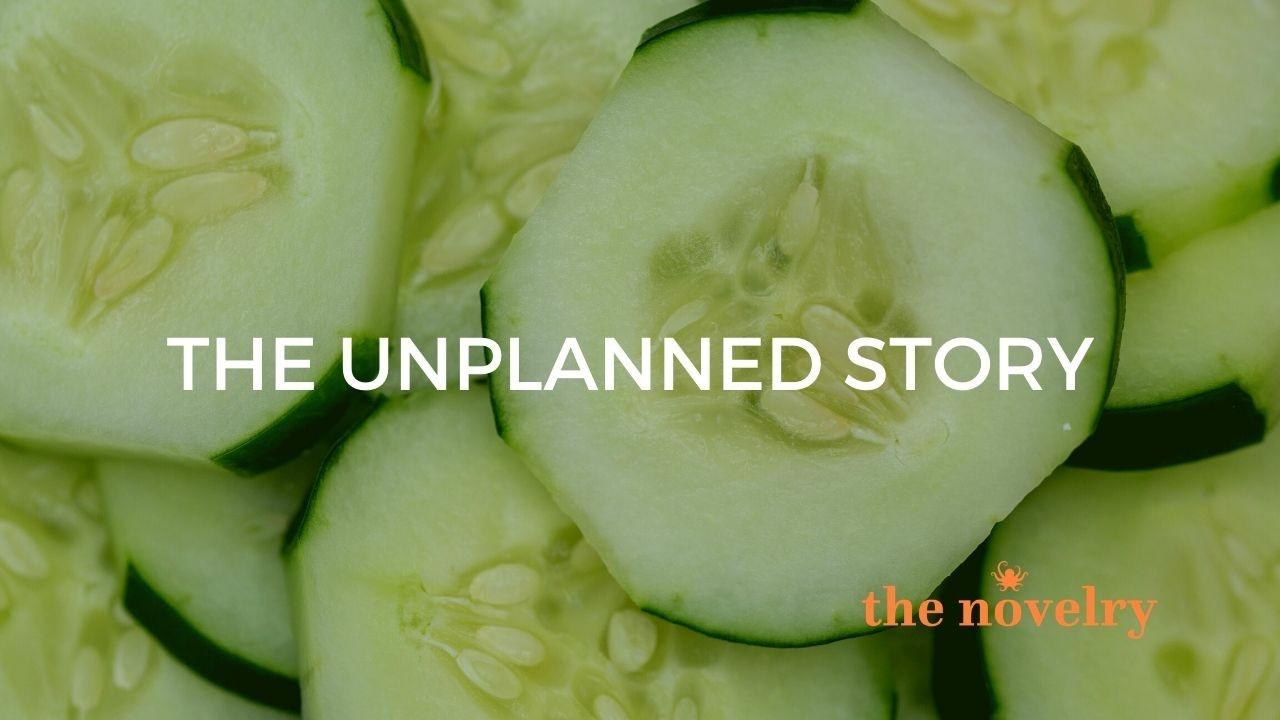 Now, if you read our blog recently on how to plan your novel, you'll be well served by knowing there's another side to the story too. Writers write in different ways at different times. We won't prescribe how you should write your novel, but we will show you all the wonderful ways to writing bliss.

So, you have a fully fleshed-out scene by scene, beat by beat, blow by blow plan for your story. The plot clock's ticking (check), we're heading to conflict (check) and a happy ending (check). The whole thing is on point.  You've planned it to the Nth degree as Iris Murdoch describes:

‘Well, I think it is important to make a detailed plan before you write the first sentence. Some people think one should write, George woke up and knew that something terrible had happened yesterday, and then see what happens. I plan the whole thing in detail before I begin. I have a general scheme and lots of notes. Every chapter is planned. Every conversation is planned.' Iris Murdoch.

Some writers say they won't leave home without a meticulous plan. The problem with planning your story is that it can feel like you've built yourself a cage.

'It has been a common saying of physicians in England, that a cucumber should be well sliced, and dressed with pepper and vinegar, and then thrown out, as good for nothing.' Samuel Johnson.

You look at the scene-by-scene daily work plan and something in you dies. It feels like there's no need to write it anymore. It's all done, you know the ending.

Let some other son of a writer write it.

I don't believe in the black and white division of writers according to 'plotter vs. pantser'. (Urgh.)  Different books may require different approaches and genres such as historical, fantasy, or where there is significant world-building will tend to require more planning. Whereas novels set in a ready-made world - contemporary fiction - will feel less like they need planning.

Some seasons of the year you'll feel reckless and up for a spot of gay abandonment whereas other times, you'll feel you want to see the chimney smoke in the distance.

Two weeks back, I had a pretty good plan worked out for my historical novel. But that was March.

April's a giddy month for me. The most creative month of the year when the mornings come and grab me by the ankle. April is trouble. Good trouble. A novel came out of nowhere to upset my carefully laid plans.

I thought I might indulge the voice that came to me and started writing the story first person.

So, it's April and I feel like writing this way. As for a plan, I make it the day before I write. I feel like I have what I need for this kind of novel which is UpLit. Here's what I've got:

I have what I need. More or less. With the emphasis on less, this time, to keep me showing up. Perhaps the key factor here is that I believe this person (the main character) is better than me.

I'm not worried about this flight of fancy, this escapade, and I know I will return to my historical novel when the season changes.

For now I'm writing into the unknown. Either you can be comfortable with that or you can't. Again, depends a little on the novel.

Wally Lamb's bestselling novel 'She's Come Undone' was the product he said of 'many revisions.' His creative writing tutor (yes, most novelists have them) told him what he intended to be another short story was a big long. Maybe it was time to write a novel. She gave him some Classics, including Joseph Campbell's work on Heroes, and sent him off to write it. The voice came to him first. But he described how he essentially told the story of Odysseus, reassured by his tutor's advice that old stories are golden. (See our much-loved Classic course to get yours!) Using ancient myths to create story was a technique he would use in his next bestseller ('I Know This Much is True.')

And this is how he wrote that lovely book which runs to 151,000 words (from an interview with USA Today):

Q. Some authors create a graph or map to plan out a plot, how about you?

Lamb: I’m envious of authors who do this, I wish I did that, it might be easier to know where I am going. But for me I am a plodder, I make an appointment with my computer everyday and I have no idea where I am going. I need to get lost and sometimes my characters lead me to places I don’t expect to go. (...)

I write to find out what the story means to me, that is what I try to do especially with the first draft. I try to find something that applies not to me only, but to others, but don’t try to control it too much. Essentially it is about what moves us, teaches us about ourselves.

Q. What are the easiest and hardest things about writing, for you?

Lamb: Dialogue comes naturally to me and I can hear the characters’ voices in the scenes. Hardest thing: creating something out of nothing – the first draft is torturous. But I love revising. If you demystify the process, it comes down to four strategies: what can I do to make the draft better; what should I cut out to make it stronger; what do I need to do to clarify it; and finally, what should I reposition.

'Writing is like driving at night in the fog. You can only see as far as your headlights, but you can make the whole trip that way.' E.L Doctorow.

Many of my writers are familiar with his quote, digging into Doctorow's method shows that there are writers who work different ways at different times.

Here's Doctorow in interview with the Paris Review:

I don’t think anything I’ve written has been done in under six or eight drafts. Usually it takes me a few years to write a book. World’s Fair was an exception. It seemed to be a particularly fluent book as it came. I did it in seven months. I think what happened in that case is that God gave me a bonus book. I imagine (God) just decided, Well, this one’s been paying his dues, so let’s give him a bonus book. But Faulkner wrote As I Lay Dying in six weeks. Stendhal wrote Charterhouse of Parma in twelve days. That’s proof God spoke to them—if proof is needed. Twelve days! If it wasn’t God it was crass exhibitionism. One of the things I had to learn as a writer was to trust the act of writing. To put myself in the position of writing to find out what I was writing. I did that with World’s Fair, as with all of them. The inventions of the book come as discoveries. At a certain point, of course, you figure out what your premises are and what you’re doing. But certainly, with the beginnings of the work, you really don’t know what’s going to happen. For instance, with Ragtime I was so desperate to write something, I was facing the wall of my study in my house in New Rochelle and so I started to write about the wall. That’s the kind of day we sometimes have, as writers. Then I wrote about the house that was attached to the wall. It was built in 1906, you see, so I thought about the era and what Broadview Avenue looked like then: trolley cars ran along the avenue down at the bottom of the hill; people wore white clothes in the summer to stay cool. Teddy Roosevelt was President. One thing led to another and that’s the way that book began: through desperation to those few images.

Do you have any idea how a project is going to end?

Not at that point, no. It’s not a terribly rational way to work. It’s hard to explain. I have found one explanation that seems to satisfy people. I tell them it’s like driving a car at night: you never see further than your headlights, but you can make the whole trip that way.

Now hear this from the late Mr Doctorow:

It sounds like a hazardous way of working—and it is—but there is one terrific advantage to it: Each book tends to have its own identity rather than the author’s. It speaks from itself rather than you. Each book is unlike the others because you are not bringing the same voice to every book.

Mr Doctorow worked slow and steady, the practice we recommend at The Novelry ( to take each day as it comes, writing little and regularly and no more):

So if I do a single-space page with small margins, that’s about six-hundred words. If I do one page I’m very happy; that’s my day’s work. If I do two, that’s extraordinary. But there’s always a danger to doing two, which is you can’t come up with anything the next day.

Writers of mine take note! We urge you to restrain yourself in your daily writing when you write with us. Put that pen down and step away from the story! Discipline is essential to creative production as you're beginning to discover! Leave it! Let it be!

As for planning your novel, at The Novelry we get you writing using a humble hybrid model combining plotting with free-wheeling. We propose you scope out a single page outline and update it regularly as you go. You work between the unforeseen mystery of the white page and that plan and have the two speak to each other.

At our one-to-one tutored sessions together we agree an approach that's most likely to work for YOU and YOUR STORY. We find the right route for you right now to get your first draft done. One size doesn't fit all. (Tools not rules at The Novelry.)

The hybrid method is a great way to get yourself writing as it gives you the confidence of a plan to guide yourself by, but as an approach it's nimble, on the tips of its toes, allowing you to embrace the mystery of writing which is so much at the heart of why we write and what keeps us writing. As Mr Doctorow put it:

'No matter what kind of reaction the book receives, whether people like the book or don’t like it, nothing comes up to the experience of writing the book. That’s what drives you back.'

Write your novel for you, your way. There's nothing that can ever compare to the experience.

If you're writing with The Novelry, we'll talk about the right approach to your novel at our first live one-to-one session of your course and ensure you've got the few things you definitely need to realize your ambition for the book. We'll keep that novel healthy all the way to delivery, whether this one's a planned or unplanned pregnancy.

(With apologies for the use of metaphor. As I am not using them in my current novel, I find they tend to slip out in my non-fiction ;-))