The value of revision becomes manifestly abundant over the course of our very intense weeks on retreat at The Novelry, with writers taking prose through rounds of work towards a shining, tight truth by the end of our time together.

At tour recent retreat, I began the week with a lesson on 'Glamour' - and how what is concealed up front in your novel will of necessity be revealed. We begin our story by showing that to all appearances all's well but the veneer conceals a lie. It's the nature of THE LIE which is at the heart of your story, and it's the chipping away at it, the revelatory process which drives the plot. If you're a writer in search of an idea, start with a big lie.

We looked at how with The Great Gatsby it was Scott Fitzgerald's intention from the start to establish a veneer of glamour in his prose and story. He had his eyes on the big lie - the American Dream - which he foresaw as doomed.

I told my writers how Hunter S Thompson typed out pages from The Great Gatsby just to get the feeling, he said, of what it was like to write that way. If I were twenty-five again and starting to write, I think I'd probably start by copying out the book. Since our return one of my writers is doing that very thing. (Read more on her process here.) 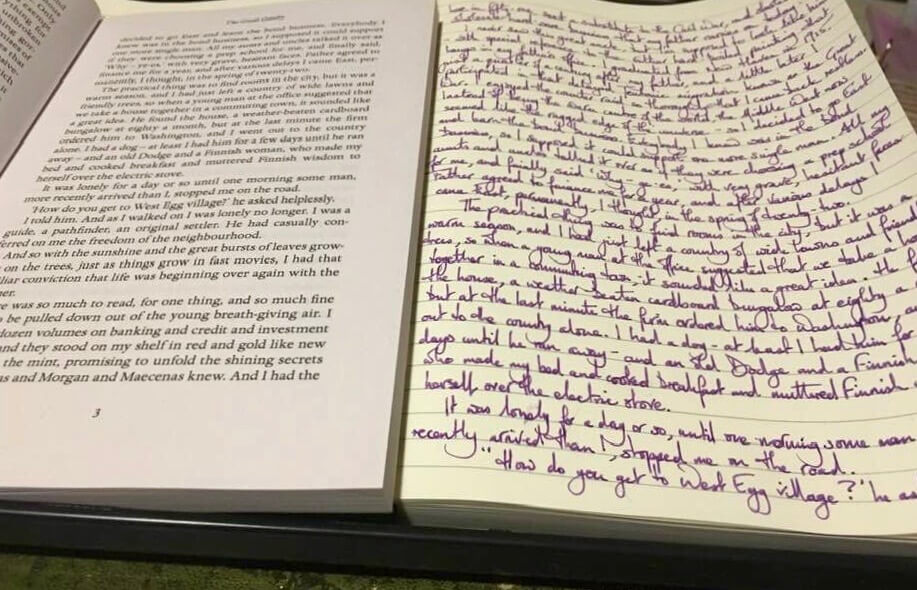 Gatsby is an awe-inspiring achievement. But I want to add a few words of consolation and remind you that every writer builds a work of accomplishment and magic in layers.

We may draw great comfort from the drafts thrown away over the two-year process in which Fitzgerald repeated the drafting process a number of times. Like we do at The Novelry, he created his first draft fast, then went through rounds of revision.

It is good to remind ourselves of this so that we don't lose heart. We should expect to sit with our work in patience and faith that what is concealed to us as a writer will also be revealed in time.

The pencil draft and the much-revised galley proofs at Princeton library show how thoroughly and expertly Fitzgerald practised the craft of revision.

'Among the many lessons Fitzgerald applied between the rough draft and the finished novel was that of cutting and setting his diamonds so that they caught up and cast back a multitude of lights. In so doing, he found it unnecessary to have an authorial voice gloss a scene. The brilliance floods in upon the reader; there is no necessity for Nick Carraway to say, as he did at one point in the pencil draft: “I told myself that I was studying it all like a philosopher, a sociologist, that there was a unity here that I could grasp after or would be able to grasp in a minute, a new facet, elemental and profound.” The distance Fitzgerald travelled from This Side of Paradise and The Beautiful and Damned to The Great Gatsby is in the rewriting of the novel.' Kenneth Eble.

'What I cut out of it both physically and emotionally,' Scott Fitzgerald wrote later, 'would make another novel!'

This is how it works.

At The Novelry you get your skills with our online novel writing courses which feed you masterstrokes from the greats. You pick up a new good habit - the way of the working writer - and you reach out for support and feedback to help you revise to meet your ambition and newly-muscled judgement and to a bar that is set so high by all of our writers.

You stick with it. You make it better.