From the Dressing Room of a Dame.

(Philip Meeks is on enforced sabbatical from pantomime, writing his novel with The Novelry. Photo © Bob Workman.) 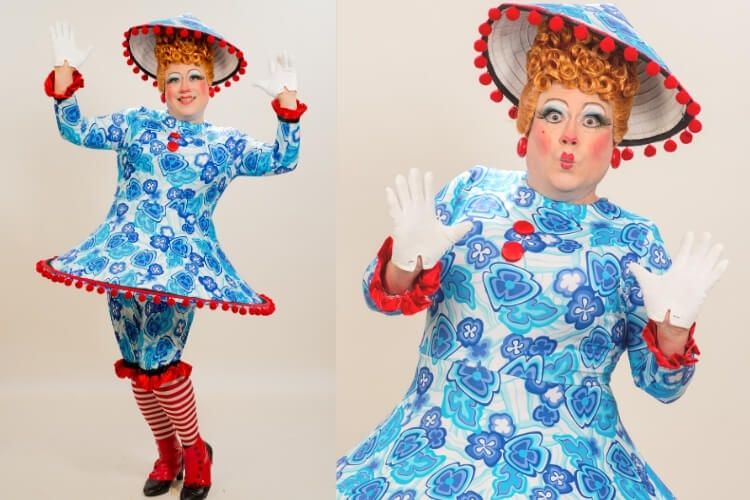 On the day I turned three, my life took such an irrevocably warped turn I never looked back...

I wish the opening sentence of my novel had come as easy.

I’d been a model child which is probably why I’ve been anything but as an adult. I was white-blonde haired with a deep brown-eyed searching stare. I’d have been a Midwich Cuckoo if I’d had the attention span.  Elderly neighbours came to sit and stare at how I ate my meals precisely, foodstuff by foodstuff, without moaning or mess. My mother says there was silence as they tried to work out how they’d gone so wrong with their own mash-splattered sprogs. I learned to speak too soon, I was walking within months and I had the early shoots of lively curiosity and imagination clearly on display.

But I fell asleep when storytime started. I chewed rather than gaze at picture books.  But then my fourth year dawned and I was taken to see Cinderella at the Theatre Royal Newcastle. And I experienced a story.

Just as the first stories had been spoken to children around firesides this story was alive and in front of my eyes.  Not only that, I heard it in a way words hadn’t to that point described any other story before.  As the fairy flashes set off a bonfire of atmospherics and the sugared jelly fruits warmed in the clutches of grannies around me, I smelt it.  Every time the big drums played, or a character cackled or the audience yelled, I felt it resound within me. I learned story could be about sense and feeling. This instilled within me the majesty of story, turning me into the reader - and writer -  I am today. The live experience changed my perceptions and my imagination was ignited. Yes.

At first, I was fascinated with the red velvet seat I was struggling to sit on that flipped up and down if I wriggled. And when the room turned dark I was possibly a bit startled even if I’d always been Wednesday Addams at heart. But the colour and eruption of sound and energy hooked me. By the time fabled British comedy actor Terry Scott  (long before Morecambe and Wise had breakfast) did his celebrated pantomime strip as an Ugly Sister, I was ruined.  To this day I only have to hear the brassy intro to David Rose’s The Stripper and I’m compelled to take my coat off. If you’re lucky I stop at my gloves.

Cinderella captivated all of my sensibilities and the way I remember feeling then became a lifetime affliction. Storytime was never the same, whether I was hearing, reading, or writing the story at hand.

But I’ll be honest, today I’m often cynical about pantomime.

“Because here I am now a poor widow woman….. it's sadder than that…..my husband died drinking milk….the cow fell on him.”

By which I mean to say, when I was eighteen gave up acting as a career and decided I’d return to it when I was of an age to play Pantomime Dame. I'd seen all the greats as a kid from George Lacey to John Inman and I was transfixed by the character. Through luck, fate, my knack for hustling and sheer cheek it happened ten years ago. ( I write this in the middle of what would have been my 11th season in a normal year… and my second show and thirtieth costume change).

I’ve been Twankey to a Blue Peter Presenter and the Chuckle Brothers (I don’t discuss that). Played Nurse or Dame Trott opposite Linda Lusardi, Su Pollard, Benidorm’s Janine Duvitski, and a whole advent calender’s worth of soap actors. My first season was Snow White, which I wrote and directed. It was performed in sub-zero temperatures in Arbroath. On Christmas Eve we had to dig the dwarves out of the snow before the matinee.

It was a midlife crisis I’m still yet to shrug off.  Some run off with dirty blondes. I became one. 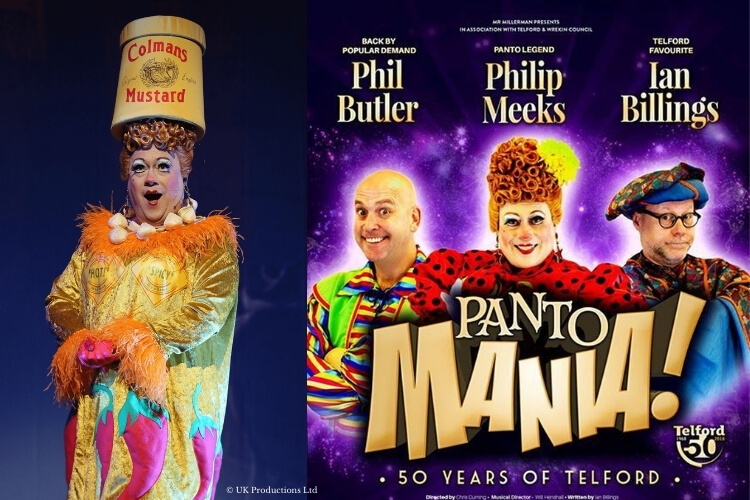 It’s been a blast, but I’m jaded and sometimes I doubt its magic. I question its commercialism and the corners producers cut in terms of storytelling as well as budget. Sometimes I doubt it should be the first introduction to the theatre kids in this country often have. But it is and probably always will be. So there’s a writerly lesson to be learned here for me ( and maybe us all, dear readers). I shouldn’t let being a Dame become a job, just as writing never will be merely ‘a job’. In my wigs, frocks and lashes I am in the role of author/ storyteller. We have to live up to our readers, to the audience's expectations. They are our future.

Any screenwriting course in the world will ask you to study Pixar movies to understand storytelling processes.  But they aren't new. There’s a reason Disney started telling legendary children’s stories.  As well as pantomime producers. These tales have survived for centuries and have been told in so many forms and ways. Children are the most discerning of audiences and appreciate any tricks or twists you might through their way in addition to the fixed points of the stories they know and love.  But they’ll let you know if you get it wrong too. (Woe betide you if you’re a blonde who attempts to play Snow White and don’t go on with a black wig!) They learn from their first exposure to a story, the experience involves their thoughts and a range of emotions.   And it is their right to experience it the way they want.

Pantomime can help the core concepts of story explode into the hearts and minds of young audiences. They follow a basic hero journey.  And they all have The Novelry's Five F’s clearly on display!  In fact, some seasons by the end of the run, I’ve often found a sixth F and it's very short. (We’re back to the Chuckle Brothers.)

In pantomime structure, there’s a short first act where we’re introduced to our protagonist, their antagonist, and their quest which is usually to find fame or fortune. At the start, they’ll usually be a bit big for their boots (especially Puss) but by the end, they’ll have worked out being true to themselves along with family and love means more than anything money can buy. (This is easy for them to say as they almost always end up richer than a  Netflix executive after lockdown.)

Along the way, the hero’s Mum and friends supply subplots in the form of comedy sequences and familiar routines. The midway point is always signalled by something called the Transformation Scene. Cinderella becomes a Princess, Jack climbs the Beanstalk or Aladdin befriends the Genie and becomes a Sultan. This point of no returns is then hammered home by the ensuing toilet break, ice cream, and a chance to say what you loved most so far as you spend the interval wondering what’s next.

In Act Two the hero will, in the midst of increasing chaos and running gags, find glory and undergo a moral epiphany after experiencing the worst possible moment of their lives. Cinderella forgets to tell the time and misses midnight. Aladdin’s foe seizes control of the Genie. The Wicked Queen poisons Snow White with a magic apple ( I’m to be found sitting in the wings cheering at this scene) and during these crises, our hero tends to reevaluate everything, get rescued, do the rescuing. They end up triumphant and a bit better than they were before - as long as in the future they avoid thinking those two terrible words, “I wish”.

At this point, might I say these story beats can today seem a bit dated? I’m ever the first to shout them down and work out another way of telling the same story in rehearsals.  We have a duty to the audience and especially the tiny girls who rock up dressed as one Princess or another. It’s bad enough their parents seemingly want them to believe the best thing that could happen to them is they meet a handsome prince. So when I write pantos as well as perform them, it's Wishee Washee who gives away the lamp and Sleeping Beauty who ends up rescuing the Prince by curtain fall. Many of my own scripts (available to license at a very reasonable rate) dilute the boy meets girl elements of the original stories completely and they still work. Kids have never liked  ‘the sloppy bits' in pantomimes so why they remain bemuses me.

But back to how pantomime structure helps create story hungry citizens of tomorrow.  WE’LL HAVE TO DO IT AGAIN THEN WON'T WE? is what we say in the ghost gag when someone once again has been scared offstage and we need to sing another verse to keep our peckers up.

Pay attention! The story information in panto is reiterated throughout. The moral of the tale is echoed and reinforced by whispers from grannies and parents. The values our hero should aspire to are repeated and what’s at stake is always at the forefront of the action. We are reminded constantly what is right and wrong and we know when our Protagonist has strayed from the path ( literally in the case of Red Riding Hood).  Pantomimes are morality plays.  These values guide the adventure.

Perhaps it’s the way it should be in our novels too. Pantomime survives because it contains the DNA of every single form of storytelling.

For The Novelry writers across the globe, if you remove this provincial panto-style and apply any type of children’s theatre, you’ll come up with the same result. I’ve watched the Grinch in New York on Christmas Eve and felt the same thrill from the kids around me.

But there’s one thing pantomime inspires that other forms of theatre and, thankfully books never will.  It’s interactive nature. The audience can speak, the blighters.  They can even become the story.

Once exposed to the format the young audiences learn the lines they’ll use again and again every Christmas. The “It’s Behind You’s” and all the hisses and cheers.  They can’t remember learning these; they find them embedded in their souls via a sort of narrative osmosis that leaves traces of all the best storytelling within us. They are compelled to join in by and with their adult companions. And sometimes anything goes. Aside from the pint of lager thrown at me in Sunderland after I mentioned Newcastle United and the front row marriage proposal which resulted in a restraining order, I’ve been lucky in the heckling stakes.  Everyone’s a bit scared of the Dame after all.  At least the way I play it.

My favourite audience ad-lib tale has to be when, in her last Palladium panto, Cilla Black asked the boys and girls what she should do to punish evil Abanazer. To which  a child in the stalls shouted, “Sing to him!”

Philip Meeks is an award-winning playwright, who has written for stage, radio and television. He is a much-loved member of The Novelry writing his first novel with us 'Mere Mortals', a take of horror among ordinary folk.

Wishing you all, wherever you are, a safe and peaceful Christmas - and a happy new novel. If you're thinking about joining us, this would be a very good time. Let 2021 at least bring each and every one of us a new novel. 🕊️