What's the Connection Between Music and Writing?

"It really is a very odd business that all of us, to varying degrees, have music in our heads." Oliver Sacks.

In Musicophilia, Sacks tells some very moving stories about those with terrifyingly profound amnesia, or Alzheimer's disease, for whom music can "restore them to themselves".  He claimed that music may be our best medicine.

I've often wondered about the connection between music and writing. Many of my writers use music, as do I, to enter the right mood for a piece of prose.

Oliver Sacks described as "amusic", those who do not seem to understand or feel music at all in his book Musicophilia. He considered with pity the case of Vladimir Nabokov, who famously said he experienced music merely as "an arbitrary succession of more or less irritating sounds"; and he wondered about how little music is mentioned in Henry James's work.

What are the mysterious connections between the two arts?

If there's an order of merit, many writers would accord first place to music.

"After silence, that which comes nearest to expressing the inexpressible is music." Aldous Huxley.

"Music is the art which is most nigh to tears and memory." Oscar Wilde.

"The only truth is music." Jack Kerouac.

"Without music, life would be a blank to me." Jane Austen.

"Music is the shorthand of emotion." Leo Tolstoy.

So many writers pine for the ineffability, the near-divine insight and affect of music which eludes us in words and speech. I have a chapter in my new novel where Shostakovich is playing. I played and replayed the piece of music, and grew sadder that I couldn't reach the intimacy and compassion of the Piano Concerto No 2. That piece has always been an enigma for me, and I use it often when I sit down to write to find proper tenderness for the people on the page.

Can words reveal our hidden places? I hope so, I think that is why I write. To send ink into veins to show those places. At least, one tries.

My musings on the connections between these arts were probably arbitrary than Nabokov says of his, then along came Elena.

Meet a Musical Member of The Novelry. 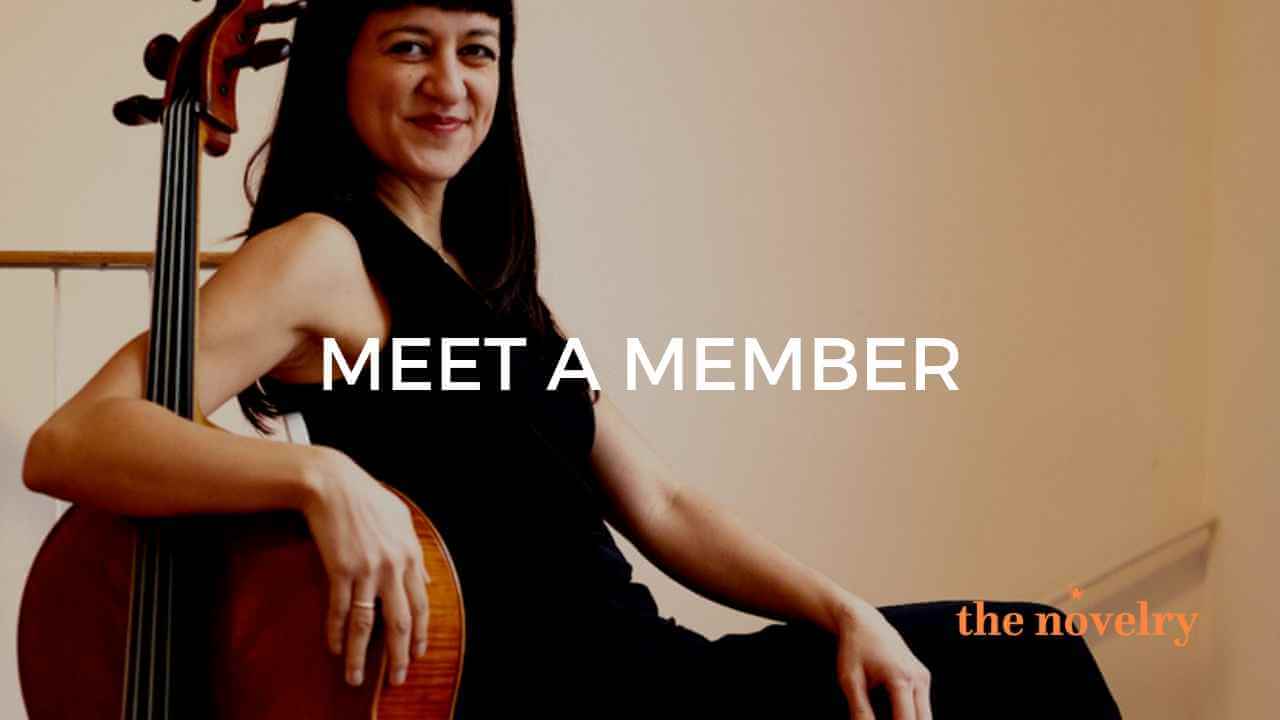 Elena Cheah is a professor of cello at the Hochschule für Musik Freiburg and a member of the Hegel Quartet (www.hegelquartet.com). She was principal cellist of the orchestras of the Deutsche Oper Berlin and the Staatsoper Berlin.

You can see Elena playing in the video with this blog post above. She is playing the final movement of Benjamin Britten's First Suite for Solo Cello. (Elena visits his hometown, Aldeburgh, once a year as a cello tutor.)

It's extraordinary. I'd like to see her fingers on the computer keyboard and the virtuosity and the sheer willpower applied to the white page!

Here's what Elena has to say about writing and music:

"Classical music training tends to emphasize correctness, perfection, the idea that there is a Right Way to do things. It also seems to breed shame in people for being less than geniuses, and for making mistakes. That is the kind of thinking that kept me from ever getting beyond about a first draft simply because I thought, well, if it isn't fabulous by now, it never will be.
Writing was actually my first love, but I did have a very strict and highly regulated musical education as a child. From age 4, I practised every day for 3 hours. In my early 20s, I used to dream that I had a baby that was taken away by my mother and given back to me walking, talking, and smarter than me. That is still somewhat the feeling I have about my musical ability, that it's not mine. It was my mother's project that I happened to be good at. It has changed much over the years, but there is still the lasting sense that I don't really belong in the music world.
In music, you have one chance to get things right in the concert. It happens in time and you can't go back. That creates an extraordinary amount of pressure, and I know professional musicians who are dependent on beta blockers to get through their lives. I never wanted to go that route, so I analyzed what needed to happen to be able to play freely while under pressure. I had to be able to let myself relax physically as much as possible, and in order to do that I had to notice all the muscles I was holding up, trying to be perfect. I discovered that every area of tension was an attempt to prevent me from hearing my own mistakes, especially the way I used to hold up my shoulders and thrust my head forward ('brace, brace!'). I worked with myself (as I now work with my students) on letting myself hear my mistakes, admitting that what came out was not pretty, and then finding a more natural, organic, physically healthy way to achieve the artistic result I wanted. That kind of work is analogous to writing and definitely helped me to get the first draft out: I get to let the crap flow first and then fix it! What's great is that I don't have to make it come out perfectly the first time. It was a hard thing to admit that I kept myself from writing for so long because I didn't want to see my own shortcomings pouring out onto the page.
Discipline can easily become an obsession for me, so it was a very good thing to be limited to one hour of writing a day. I'm slightly concerned about the editing process, but we'll see when we get there... As for rhythm, I don't know. I do notice the rhythm of my words, but not necessarily of the writing process.
The main difference between music and literature for me is that I don't compose music, so I'm always playing other people's music. I am a re-creator, not a creator. Literature is a realm where ideas can take shape and be explored; music requires me to be in conversation with the composer (in my mind) and imagine the music into life. There are far more rules.
There is one sort of unresolvable paradox for me in the music/literature divide, and that is that music demands that one be an extrovert, at least on stage and at best offstage as well (if you want to keep getting work), and literature demands pretty much the opposite. I've always felt torn in these two directions, and I still do."

As writer and editor, Elena assisted Daniel Barenboim with his book Everything is Connected (Verso, 2008). Her own book An Orchestra Beyond Borders: Voices of the West-Eastern Divan Orchestra was based on her experiences as member and mentor of the Arab-Israeli youth orchestra.

For some years she wanted to write a novel, and her ambition was to complete it before the end of this decade.

She came to The Novelry in 2019, began writing a novel on one of our creative writing courses, with us in February and finished her novel in May. She is now in the 'holding pen' (apologies for the pun) into which I put my writers between first and second draft; a month away from the novel to gain perspective.

She had kindly given me permission to quote her experience of writing with The Novelry, becoming a writer and how that fits with her work as a musician.

"Today was the first day I didn't get a lesson in my mailbox, although I've been finished with the first draft for 2 weeks now. It makes me appreciate just how much thought and love you put into those lessons and gets me thinking about how I can give myself the same as a graduate.

What has hit me the hardest about being in this literary limbo is the contrast between life as a self-proclaimed novelist and life as a musician. The irony is that I was performing more while I was writing the first draft than I am now in this in-between phase, but now, without the excuse of writerdom, I am putting myself under pressure to be a 'real musician' again, and that makes everything feel heavy. Letting myself be a writer who plays once in a while made everything beautiful and meaningful and, in fact, effortless. For the first time, I had found my place in the world. Playing the cello has always been my profession and often my passion, but life only makes sense when I'm writing.
Needless to say, I can't wait to get back to the novel, even if I'm also scared by the potentially destructive force of my own self-criticism. I have confidence that your editing course will see me through! I have many quiet weeks over the summer of not teaching and not even riding trains to sit and write in my Berlin hideaway. Some things are going to have to change to make my musical life more compatible with my literary life."

So how did The Novelry help Elena finish her novel?

"Reading Disgrace and your analysis of it was fantastic. The community makes it all feel real. I loved getting a new lesson every day; this is perhaps what made me feel like a 'real writer' the most. Quotes from other writers about writing were very helpful. The team chats also help to make it all real and keep it the most important thing on my mind.
It exceeded every expectation I had of an online writing course. It has taught me the discipline and the craft of writing and persevering, it has opened my eyes to writing techniques I was not conscious of, and it has made the whole process of writing with all its accompanying self-doubt less lonely and more bearable. I started on this course knowing that I had to do something, just anything, to kick-start my writing, and I never expected it to be this fabulous and life-changing."