Defying Gender as a Writer

'I think being a woman is like being Irish... Everyone says you're important and nice, but you take second place all the time.' Iris Murdoch.

Gender is an old-fashioned concept, but it has played some part in the body of work that is literature, and it might be innocent to say it no longer plays a part. Yes! The LGBTQI has been a huge and helpful force for change to think outside the two boxes, but we're not there yet!

The Man Booker 2007 winner, Anne Enright has spoken out on how books by women are rarely reviewed by men, while books by men are appraised by critics of both genders. The implication is that literary editors believe books by male writers express universal concerns while those by women are regarded as much narrower in scope, lacking the subtlety needed to engage the mind of the cerebral male. Anne Enright has also observed that The International Dublin Literary Award (formerly known as the Impac), the richest on the literary landscape with a purse of €100,000, has been won by a man each year for the last 16 years. 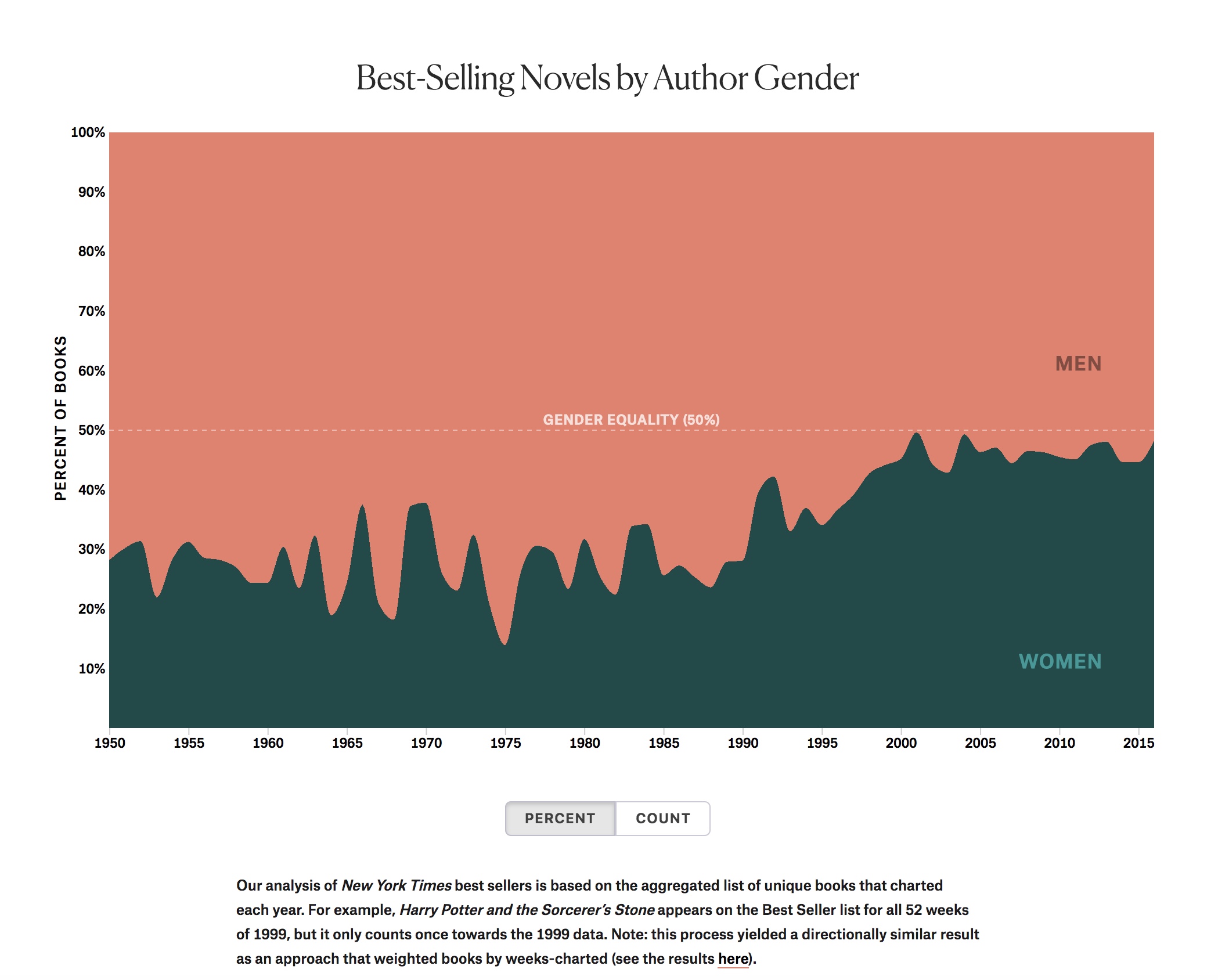 Men have always been more able to find time to write. Women, less so, unless ennobled in some way, with a private income and childless. Therefore, what women write has greater value, in that it has cost more; it has been harder won!

'Intellectual freedom depends upon material things. (...) Women have had less intellectual freedom than the sons of Athenian slaves. Women, then, have not had a dog's chance of writing poetry. That is why I have laid so much stress on money and a room of one's own.' Virginia Woolf, A Room of One's Own

The 'pram in the hallway' cliché is a commonplace, but one that has always attached it's sticky hands to women. Men, well off or not, have been able to dodge women's work hitherto, and women's work is 24/7 and thankless depriving women of time but worse, the nerve to write. Because writing requires brazen nerve, and women have been trained to go second. We cook, we clean, we serve a household, before we attend to the leftovers of ourselves and attempt to find in those sweepings the words that belong to others with lives they can change (it's fiction, folks!). Writing both puts you forwards, advances your experience of life as meaningful, and cuts you down to size too. Self-effacement, the unravelling of the existence and identity of the protagonist, is something we are however likely to be very good at.

While vanity is an unattractive quality, women could use a shot in the arm of the conventionally male preserve of unboundaried, lesser-evidenced, confidence. Women are the first to salute their failures, they greet their misgivings as old friends, and as if putting the lid on a cookie jar, seem to say 'I knew I shouldn't have.'

Of course, I too worry about the writing at times but I prefer anger to self-saucing sabotage any day of the week. The former is slightly useful, the other not at all. I offer some tips below on converting your melancholy to malevolence.

For every whimper of defeat sounded at our members site, there bursts forth from the Kritikme Krew, a robust and resounding retort of encouragement. We are the proud home of many Boudiccas of male and female persuasion, enjoining each other to get the words down inspite of the duties and dayjobs.

You need support when you're writing, and what I mean by that is less commiseration than a kick up the backside.

My writers (about 90% women) deal with extraordinary and ordinary life events; their courage is staggering and they've dealt with the worst things imaginable - illnesses, deaths, divorces, disputes you name it - and kept writing.

For those of you whose heels are sometimes licked by the black dog, might I suggest:

Lessons From The White Dog and Notes On The Uses of Anger.

A constancy of small treats as rewards for compliance. Objections depress and baffle the puppy and are ineffective for training. A little tidbit is just the trick.100 words - a coffee. 200 - with sugar. 300 - a biscuit or a croissant...and so on. How about milestones? That item you've been coveting at 20,000? A larger treat at 30k. How about the thing you promised yourself when the book was published - well you reward yourself with it at 45k?

Boundaries. Put an imaginary wire cage about your hour of writing and do not let anyone enter it. Turn off phone. Close the door firmly. Tell your family that you are giving yourself one hour a day between x and x hours and that's that. That's your hour and you will not be interrupted and will not leave the room for anything, and if grandma arrives it's their problem.

Stupid joys. Halfway through your writing do something stupid to liven yourself up a bit. At The Novelry, I recommend a 'triumph tune' you play. Have it cued up. It should be really stupid. A guilty pleasure from aged 15-16 when you thought you could do anything. Or play with the little white dog. I like to sing a nonsense song to me and we play a game where I hide behind the sofa and lob toys at him. This is the serious practice of a devout writer.

A shitlist. (People you'd like to bark at who approach you the wrong way at the wrong time.) Traditionally writers acknowledge those who have helped them. With the (female) writer's confidence on the low side, the list can be lengthy and include anyone who has been kind at all. Balls to that. Make it short and the opposite of sweet and keep it tucked in the back of your notebook. 'I have written this book in spite of....' Name family members. You can always make it your phoney acknowledgements list when you're drunk with the joy of 'being published' at some point, but I find mulling over a grudge quite helpful when writing. I nurse my shitlist, and carry on regardless. Funnily enough, when the book is done, the grudges have disappeared...and I love you all darlings, love love love, again.

It is in the ungendered centre of you, you'll locate the will to write your story above all else. Yes, you will attend to the kids and the family, work and lovers and pets, but you'd rather be writing. They can have your hands but not your head.

Drop the female stuff, at least when you're writing. Stop being nice, be severe. Writing a book is muscular. Hunch the shoulders, give stern looks, forego being 'nice' in favour of 'pissed off' and you'll get there.

'This is my hour. This is all I ask for and I am taking it.'

Like a small white dog channelling devilment, you can make a hell of a beautiful mess in an hour left alone. All sorts of havoc can happen on the page. Go for it.

Joy and anger, joy and anger.... chase the tail of frustration with a snapping mouth.

John Boyne on Why Women Are Better Novelists (from The Guardian.)

'First, perhaps it is the historically subservient role women have played in society that has made them understand human nature more clearly, a necessity if one is trying to create authentic characters. Having been expected to bring up families while running a home and catering to society’s expectations of what women should be, they have a better grasp of human complexity. My female friends, for example, seem to have a pretty good idea of what’s going on in men’s heads most of the time. My male friends, on the other hand, haven’t got a clue what’s going on in women’s.

Second, many male writers, particularly younger ones, approach their work as if they – and not the books – are what’s important. They obsess about establishing a reputation while ignoring the importance of just writing something good. I recall one highly ambitious young man telling me all the awards for which his first collection of stories would be eligible and rating his chances of winning each one. (In the end, the book made less of an impact than a pebble thrown in the Atlantic.) He never mentioned that he’d like his book to make a connection with readers and speak to our times. All he wanted was prizes. It felt to me like a sad reflection of our times.

But it’s in their depictions of both genders that female writers have the edge. I’ve grown weary of reading novels by men that portray women in one of four categories: the angelic virgin who manages to tame some quixotic lothario who’s spread so many wild oats that he has shares in Quaker; the pestering harpy who nags her boyfriend or husband, sucking all the fun out of his life; the slut who eventually gets murdered as payback for her wanton ways; the catalyst who is only there to prompt the man’s actions and is therefore not a human being at all, just a plot device. I find female writers are much more incisive in their writing of men, recognising that several billion people cannot be simply reduced to a few repetitive strains.'

I will say I think it is true that women are particularly nimble, adept, at writing men. Even the better, the best male writers, never seem to quite get women right.

Personally, I love writing male characters and writing as a man or from a man's perspective, because it's so much simpler - it's a nice holiday from being apologetic and sympathetic, from considering the reactions of others to oneself  24/7 which to me has always defined what it is to be a woman. When I write I don't give a hoot, and I like that.

I think I write well as a man, and do men a favour too, because I write them ungendered in fact. I don't write them as macho dipsticks. I write them as if there was such a thing as a gender-neutral entity. A head, a heart, hands.

Writing for me is a form of expression that defies gender; it's the only way to be truly free at all. To be human. Want to try it for yourself? Start writing your novel with one of our novel writing courses today.

I guess that's pretty simplistic, but damn it feels good.