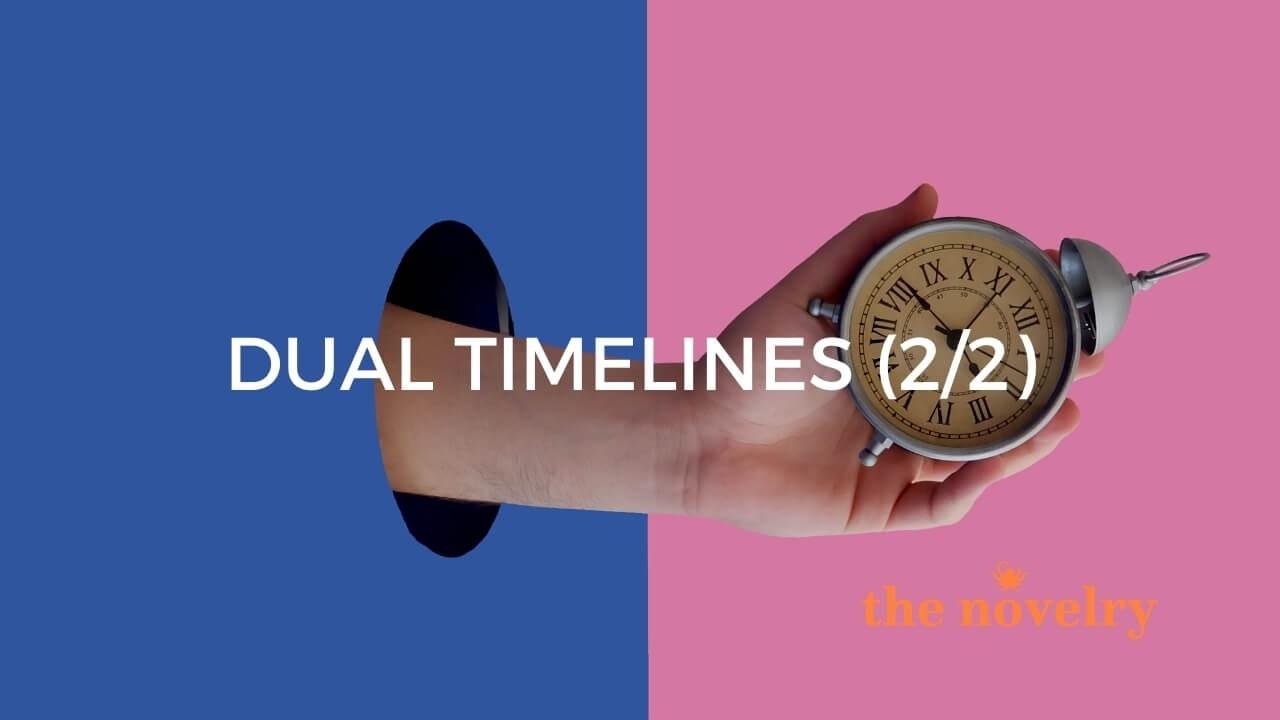 From the desk of Katie Khan.

In the very beginning, when I experienced the first gleam of an idea during a nap in my parents’ attic, my debut novel Hold Back the Stars was to have only one timeline. A couple were falling through space with only ninety minutes of air remaining, I imagined, and as they fell, they talked about their relationship and how they came to be in the great vacuum of space.

I queried myself – could they be treading water, surrounded by sharks, would that be easier to write? I lived on a hill in north London surrounded by sky, obsessively tracking the International Space Station each night as it passed overhead. No, I decided, it had to be space. But the idea felt quite thin; perhaps a (long) short story or a novella. It was only when I came up with the second timeline – that same couple’s entire relationship, shown chronologically as it happened on the Earth beneath them – that I knew I had enough for a novel.

Many dual timeline novels fall into the historical fiction category: one timeline set in the past, often during the war; the other in the present day. The dual protagonists might be relatives – a grandmother and granddaughter, say, or a modern-day sleuth exploring what happened at a particular moment in history. So while my speculative fiction might be considered an unconventional dual narrative, I learned a lot about what it means to balance and craft a story that takes place in both the present and the past.

Why is it worth considering? Because dual timeline is an extremely commercial structure for a contemporary novel.

In Taylor Jenkins Reid’s The Seven Husbands of Evelyn Hugo, an elusive actress towards the end of her life recounts her golden years in Hollywood to a young journalist, revealing the true love of her life. (If memory serves me correctly, a man also recounts his incredible survival story at sea to a journalist in Yann Martel’s Life of Pi. And a vampire to a journalist in Ann Rice’s Interview with the Vampire. What a great formula!) In Abigail Dean’s forthcoming Girl A, optioned by the director of Chernobyl and publishing next year with Harper Fiction, a novel already touted by her publisher as ‘the novel that will define a decade’, a girl who escaped horrendous childhood abuse at the hands of her fanatical parents, must confront what happened to her and her siblings in the famed ‘House of Horrors’ after the death of her mother. The novel shifts back and forth in time between ‘Girl A’ as an adult, and the girl as an imprisoned child.

Whether you are writing two equal timelines that form 50:50 of your novel, or a plot that requires flashbacks or backstory, there are some key considerations to take into account:

The more separate your two timelines are, the more ineffectually disparate, the less successful the storytelling. Dual timelines as a device exist to create connection, to demonstrate the impact one generation can have on the next, or to show us how the echo of the past is still heard in the present.

You have a couple of choices here.

You could draft your two timelines separately, then interleave them in the edit. I’m sure you can guess by my slightly cynical use of italics that I don’t personally recommend this. It’s nigh-on impossible, except for the most gifted writers, to lose the silo feeling of two stories told separately. Instead what I recommend (and how I wrote Hold Back the Stars) is to write your timelines already interleaved, an alternating story unfurling as one. This can take a bit of plotting. You might balk at a spreadsheet, but a scene list will be invaluable (particularly when it comes to the many edits down the road). Consider colour-coding: Storyline A, Storyline B. Where do you get in and out of each storyline? Leave us on a cliff-hanger, so the reader longs to return to find out the ‘answer’. And what is the trigger or the transition that sends us tumbling towards the other timeline?

This, for me, is one of the key techniques for writing dual timelines. Some stories work well to create structural boundaries between the two plotlines. Chapter 1: storyline A. Chapter 2: storyline B. Other novels, particularly those dealing with memory, backstory or flashbacks, work even better when the transitions between the two timelines are seamless. Both timelines lie alongside each other on the page, bound together within the same chapters. Remember Sally Rooney’s ABA structure in Normal People: action-backstory-action. Or for me, in Hold Back the Stars: present-past-present. (Potato, potato – these are the same thing!)

Consider this transition in Richard Yates’ iconic 1960s novel Revolutionary Road. This isn’t a dual timeline novel, but rather the portrait of a failing marriage, and it presents a beautiful juxtaposition of the romance of first love against the sagging weight of a long, difficult marriage. In chapter one, we sit with Frank Wheeler in a suburban am-dram theatre, watching his wife April perform badly in a terrible local play. A fraction of a moment later, we are watching a sparkly-eyed Frank meet April for the first time at a New York party. When I was writing my debut, I spent weeks looking at this. How did the author do it?

Frank drives a crushed and embarrassed April home from her disastrous play, the couple heading towards a major argument:

With a confident, fluent grace he steered the car out of the bouncing side road and onto the hard clean straightaway of Route Twelve, feeling that his attitude was on solid ground at last.
— Richard Yates, Revolutionary Road

As Frank drives, we are flung years back, to their first meeting:

And now, as it often did in the effort to remember who he was, his mind went back to the first few years after the war and to a crumbling block of Bethune Street, in that part of New York where the gentle western edge of the Village flakes off into silent waterfront warehouses, where the salt breeze of evening and the deep river horns of night enrich the air with the promise of voyages.
— Richard Yates, Revolutionary Road

Frank and April meet at a party, and then:

A week after that, almost to the day, she was lying miraculously nude beside him in the first blue light of day on Bethune Street, drawing her delicate forefinger down his face from brow to chin and whispering: ‘It’s true, Frank. I mean it. You’re the most interesting person I’ve ever met.’

‘Because it’s just not worth it,’ he was saying now, allowing the blue-lit needle of the speedometer to tremble up through sixty for the final mile of highway. They were almost home.
— Richard Yates, Revolutionary Road

A few pages of flashback and we’re right back in that car with them, about to get into the mother of all fights. There weren’t even line breaks to separate the scenes.

Let’s dig into the how.

The word ‘now’ jumps out a mile, twice, establishing each timeline. See how Richard Yates gets us in late and takes us out early – April is mid-sentence in that last dialogue line to Frank, after their first night together; Frank is mid-sentence to April, in the first dialogue line back in the car. Notice, too, the entire transition takes place in a travelling car, mirrored and echoed with the line ‘the promise of voyages’ in the past timeline of Bethune Street. This is important; like a memory triggered by a scent or place, using reflected imagery between both timelines eases the shift between them. I used this myself in Hold Back the Stars, when Carys and Max are falling in space above the Earth, watching the sun rise across a continent; the next scene on Earth is a sunset beneath which they decide to break up.

The experience of writing my own ABA structure of past-present-past was a little bit trial and error, but I hit upon a technique that seemed to anchor the reader, so it was always clear which timeline I was dropping us into. My publishing houses (Doubleday/Penguin Random House in the UK, and Gallery/Simon & Schuster in the USA) assisted with this clarity in the typesetting of the book, by separating the Earth and space scenes with a dividing symbol of a star, though I had written the transitions often without line breaks at all – heavily influenced and inspired by Revolutionary Road! This level of clarity for the reader (where and when am I?) is particularly important if your dual timeline contains the same characters in both, and less essential if your dual timeline features separate characters, for example the grandmother and granddaughter.

I wrote my present timeline, unsurprisingly, in present tense. I wanted the reader to feel the immediacy of their dire situation, the helplessness of Carys and Max fighting to survive, oxygen levels ticking down in every scene as they try and fail to save themselves:

‘We’re going to be fine.’ He looks around, but there’s nothing out here for them: nothing but the bottomless black universe on their left, the Earth suspended in glorious technicolour to their right.
— Katie Khan, Hold Back the Stars

But Carys and Max’s relationship on Earth, which were memories, are written in past tense:

He had left the dinner party around midnight and she’d seen him to the door, leaning against the frame, her arms huddled inside her cardigan against the chill. ‘Thanks for tonight,’ he said.
— Katie Khan, Hold Back the Stars

Here’s the technique, which I recently found summarised perfectly in the marvellous 2019 book Dreyer’s English by Random House copy chief Benjamin Dreyer. My word, how I wish I’d had that book to hand as I’d laboured through the transitions of my first novel and discovered a version of this method for myself.

But what if you’re not writing dual timelines? Is any of this useful? The short answer is: yes. I’m currently writing a novel with alternating perspectives from two different characters, and the experience of writing a dual timeline novel has been invaluable in showing me how to handle the shifts. The first list of bullet points in this blogpost all apply if you’re writing a multi-POV story: both (/all) arcs must be equally compelling; the moments you choose to cut away generate the driving tension and suspense of the novel, and what happens in one arc should reveal a truth in the other.

Best of luck if you’re writing dual timelines – I cannot wait to read them, and I hope these techniques assist with the push-pull of balancing your two interwoven narratives.