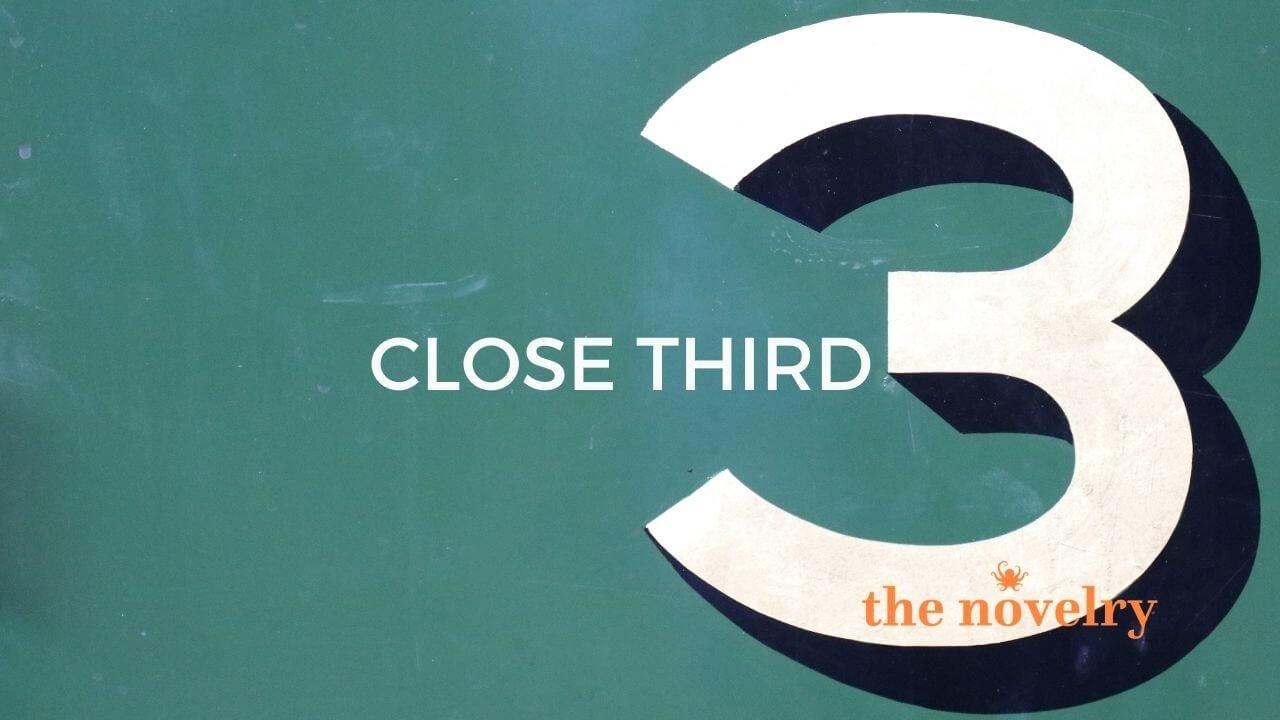 There are many choices to make when you begin writing a novel. Some you can choose from a starter menu -  present or past tense, first person or third? - while others you will discover off-menu along the way, making what may feel at the time like a mistake. Personally, I’m fearful of going off-menu after learning, at the tender age of nine, that frogs taste like chicken, but with a lot more tiny bones.

Fiction is more forgiving. The brilliant thing about making mistakes in novel writing is you can fix many of them in a later draft. If you read your novel like a critical reader, rather than as the writer, and you’re willing to do the work, you can absolutely salvage and sharply improve the book.

But let’s talk about the menu because choosing wisely at the outset can save pain later. The first thing I like to do, when I have a plot and story in mind and ready to be written, is to audition the voice.

First, I pick my narrator. Who is the most interesting person to tell this story? Who is seemingly the worst-placed person to be the hero of this story? The police chief who’s terrified of water must catch a shark terrorising his town. (Jaws.) A tiny hobbit who has never left the Shire must travel across the world to save it. (The Lord of the Rings.) The ‘unlikely heroes’ often make for the most exciting protagonists, because they have the most potential for change. They have a major flaw to overcome; they start the novel on the back foot. If you are very lucky, you will select the right lead character in your first draft. But sometimes you won’t, and that’s okay. Sometimes you’ll only learn by writing out the entire thing that a character hiding in the wings was the most interesting person all along. This has happened to me recently. It’s fine; these things happen. Don’t beat yourself up – instead, embrace the fact you found the exciting character, and your next draft will set this story world alight. We’re looking for chicken, not frogs.

The next thing I like to do is to play around with style, writing a section in first-person (‘I walk into a bar’), then a section in third-person (‘Katie walks into a bar, then remembers we’re in a pandemic, so she leaves again’). Which do I prefer? Which feels inherently closer to what I’m trying to pull off? (Which is more popular for the genre I’m writing in?) Which gives the voice some breath and air, and lifts the prose into sounding like – well, a published book? This decision will have a huge effect on the overall feel of the project. It’s likely the biggest choice on the menu.

If you’re writing in first person you’ve probably chosen it because it’s intimate. It’s also familiar. It’s how we move through the world: we write text messages, emails and letters in first. ‘Hi mum, I love you.’ Blogs, newspaper columns and opinion journalism are presented in first person, too. It’s comfortable, personal, and easy. Technically, debut authors are less likely to veer towards ‘head-hopping’ and accidental PoV switches when the perspective is fixed inside one character, which makes it a straightforward single line through a story. Clean and precise.

In recent years, first-person fiction has become increasingly prevalent and successful. It dominates the commercial fiction market. I’m struggling to think of a single novel I’ve read that will be published next year, which was sold to publishers with enormous fanfare and optioned for film in spectacular deals, that isn’t written in first person. Yikes! (I’ve recently read The End of Men by Christina Sweeney-Baird and Mirrorland by Carole Johnstone, both publishing in April 2021, both in first person, as are many others.)

Young adult fiction and psychological suspense novels, in particular, are often written in first – I believe for one significant reason: the reader can step directly into the character’s shoes, and the story unravels as though it’s happening to them. First-person characters rarely describe their appearance – why would they? They can’t see themselves – and so, other than perhaps a passing mention of hair colour, they act as a blank avatar for the reader to populate with their own traits. This ups the ante for tension and conflict in suspense thrillers (‘don’t go in that room!’ then: ‘I’m going in that room!’), and adds to the 'swoon' of teenage love, because the reader feels like it’s happening to them. That awesome guy is looking at us across the cafeteria. Remember what that feels like?

So why would you choose to write in third person, when first is so intimate, commercial and clean? Especially when you’ll often hear the criticism that third person can be ‘distant’?

I think of it like a fist held in the air in front of your right eye. (Bear with me.) In first person, the fist was inside the character’s brain, privy to all their thoughts, looking out through their eyes. But in close third person, the fist is just in front of the character’s right eye, able to look at the world surrounding them, but also able to look back at the character themselves. If you’re writing fiction where the character experiences external change, as well as an internal shift, you may want the 360º perspective that third person provides. We want to see it happening to that character, and project our thoughts onto them, rather than walking completely in their shoes.

First person voice, done badly, can be pretty exhausting. Have you ever read a novel where you long to get out of a character’s head and see the world, and whooped with delight (or relief) when the perspective has switched to another character? I have. I would go as far as to say I’ve abandoned more first-person novels than third, because if you don’t like the voice in first, the voice is everything.

Each story has its own needs. One of your novels might work brilliantly in third; the next, in first. I don’t believe in blanket rules or house style for authors, but I do think auditioning the narrative and extensively playing with the execution of voice will help you uncover what this particular novel demands.

Confession time. I wrote the first draft of my third novel-in-progress in first person. But in later drafts, I’ve realised I need a gap between the narrative and the character. I need room for objectivity and to judge them, a little bit, and I certainly need to see them. And as a dual narrative, I need more space to show the world around them than being trapped inside the two alternating voices could ever provide.

The amount of work involved in reworking an entire dual narrative novel written in (2 x) first person, present tense, into (1x) close third, past tense, gives me the palps and, like a solar eclipse, I can’t quite look at the problem directly or else I’ll go blind… But it’s work to be done, so I’m rolling up my sleeves because I can see that the novel is already much better for it. Chicken, not frogs, that’s what I keep telling myself. No tiny bones caught between the teeth today, thank you.

But what about the ‘distance’ of third?

It really depends how far away you want that fist to be from your character’s eye. If you’re writing an omniscient third-person narrator, that fist is probably way up there in the sky, looking down on the landscape. In close third, the fist is just in front of their face. And I can assure you it is possible to write in close third and have it feel just as intimate and distinct as first, while also maintaining that nice, refreshing gap to breathe. This is the technique I’m using in my latest, and it’s one I absolutely adore.

Often known as free indirect style, speech or discourse, this is a method for expressing the character’s inner thoughts by placing them directly in the narration, rather than having a character express them directly.

For example, direct/reported speech is when a character’s own words are quoted (with speech marks):

‘The bar’s heaving, isn’t it?’ said Katie. ‘I thought people would have more sense during a pandemic.’

Indirect speech tags the character’s thoughts or words with a clear attribution such as ‘she said’ or ‘she thought’:

Katie thought the bar was busy for a Wednesday morning in the middle of a pandemic, and resolved to go home immediately.

You see how this feels slightly distant, still? A clear delineation in the narrative (‘Katie thought’) gives the feeling that what the character is thinking is *somewhere over there*.

Free indirect speech, by contrast, dispenses with ‘she said’, ‘she thought’, and often with speech marks or italics entirely. It places the character’s thoughts, with no attribution, directly in the prose.

Katie walked into the bar. Jesus, it was rammo in here. Time for a nice walk in the sun followed by an ice cream in the shade.

Whose thoughts are we hearing about the bar being rammed, and who wants the ice cream? The colloquial choice of the word ‘rammo’ as well as the light blasphemy indicates it’s the character, rather than the narrator’s voice, doesn’t it? Free indirect speech retains the idiomatic qualities of the character’s words. The gap is closed.

This isn’t anything new: Jane Austen was a master of free indirect speech, using it extensively in Emma and Sense & Sensibility. D.H. Lawrence liked it, too. Consider James Joyce in Ulysses:

He kicked open the crazy door for the jakes. Better be careful not to get these trousers dirty for a funeral. He went in, bowing his head under the low lintel. Leaving the door ajar, amid the stench of moldy limewash and stale cobwebs he undid his braces. Before sitting down he peered through a chink up at the nextdoor window. The king was in his courthouse.

And we can’t talk about this technique without mentioning Virginia Woolf, probably the MVP of free indirect speech. As well as To the Lighthouse, Mrs Dalloway is considered a masterclass of the style:

And as she began to go with Miss Pym from jar to jar, choosing, nonsense, nonsense, she said to herself, more and more gently, as if this beauty, this scent, this colour, and Miss Pym liking her, trusting her, were a wave which she let flow over her and surmount that hatred, that monster, surmount it all; and it lifted her up and up when – oh! A pistol shot in the street outside!

Oh, the voice! Right there in third person! It makes me happy.

If you look, you’ll find this style in modern fiction, too. It won’t have thoughts reported in italics, and it will move quite freely between indirect speech and free indirect speech. If the novel is written in the third-person point of view, and the narrative is peppered with the voice and thoughts of a character that feel idiomatic of that particular person, there’s a good chance this is free indirect speech.

Can you find an example in a book you’ve read recently? And will you try it in your next novel?

From the Desk of Katie Khan.

Sign up to one of our writing courses and you can choose Katie Khan as your tutor and start writing with the guidance and support of a 'writing' mate today. Write with confidence.