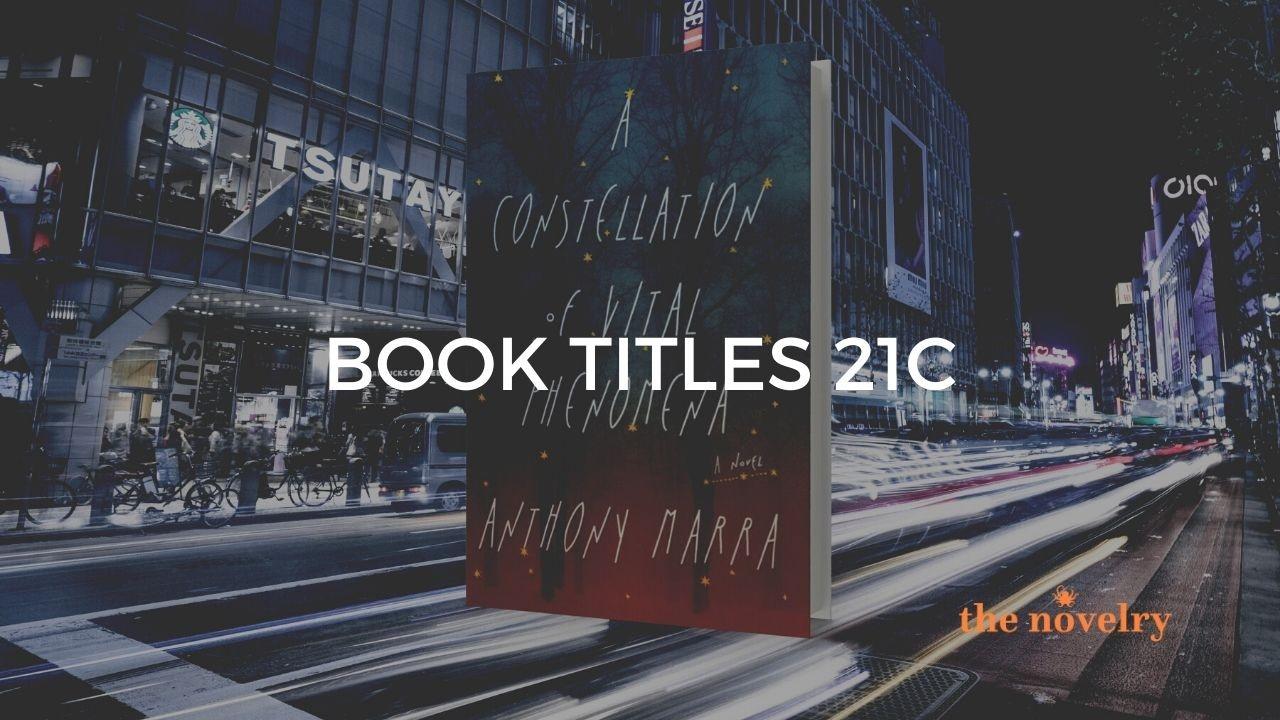 In the first blog of the series, we took a look at why you should start your novel writing plan with your title rather than pick and mix as you go or pin a tail on the donkey at the end. In the second blog we saw the dominant form for the novel title prior to the Twentieth Century was the eponym - or the name of the main character of the story. In the third blog of this series, we saw how the dominant form for the novel title in the Twentieth Century became the Reference; poetic or biblical. In the fourth blog, we saw the emergence of low-brow references and the rise and rise of the Supermodel Solo title at the end of the century.

Welcome to the 21st Century, which we might describe as the Age of Obscurantism, with strained efforts on the part of authors to reach for titles which challenge the reader.

Now, we see a major rift opening up; a chasm between high brow literary canon and the common reader.

This research is drawn from 'literary lists' recognizing the 'great novels' according to the reviewers of The Guardian, BBC Culture, Powell's Books and Vulture. In the first part of this blog we're dealing with the 'deified' works. And this in itself speaks volumes. We are witnessing the rise and fall of literary fiction. Perhaps, part of its demise can be attributed to the cryptic suicide notes of its authors' titles. Remember, the title is a statement of literary intent, and these titles scream - cleverer than thou!

Some temper the fine fare of their novel with the salt of a wise addition of 'The Adventures of...' (See Michael Chabon: The Amazing Adventures of Kavalier and Clay).

But too often, the literary gentry took the elevator to the penthouse. Novelists in search of esteem became the political party that disdains its voter base. (See: Margaret Atwood's title Oryx and Crake. Fair do's these are characters within the novel, but the statement of literary intention this is forbidding. Better The Edible Woman than the indigestible luvvie.)

We can imagine our authors kicking the backsides of their Bibles and poetry anthologies out the door in favour of academic textbooks, science reference and technical manuals.

The Sense of an Ending (Julian Barnes) title comes from a book of literary criticism by Frank Kermode first published in 1967, subtitled Studies in the Theory of Fiction, the stated aim of which is "making sense of the ways we try to make sense of our lives". The critic Boyd Tonkin noted that Barnes's "show-off" characters could be typical readers of Kermode's work.

I feel I owe it to you to explain, though possibly you were completely au fait, that the word "darkmans" is old thief cant for nighttime, Fingersmith is a thief and The Echo Maker comes from the Cherokee name for the birds, echo makers, calling to each other across the millennia. All of which makes The Echo Maker sound heavy-going - and occasionally it is but I'm afraid there's little excuse for the awfully forbidding title A Constellation of Vital Phenomena by Anthony Marra. (Now with Extra Libris material, including a reader’s guide and bonus content from the author.) Apparently, it's far better than the title. I haven't read it, feeling cowed entirely by the intention stated in its title which is grander than Stephen Hawking's A Brief History of Time. (Did neither Marr's agent or editor not say to Anthony - mate, you might want to rethink the title?)

Gone are the 'Composed Atmospheric' titles, few are the Eponyms, au revoir to the Occupations, scarce are the Curious Elements from the book or Quotes from within.

Arise the Supermodel Solos, the Pseudo-Scientists, and the historical and cultural references which dunces like you won't know from your elbow. We have exhortations and instructional manuals to show you how to be good, or better, better. We have the definitive statement on common events or concepts. Clue - two words, begins with THE.

The Possessed, The Party, The Wake, The Sluts, The Afterlife, The Road, The Master, The Dinner, The Power.

Titles like Normal People or Ordinary People can be seen as versions of the author giving the 'definitive' statement on the matter. 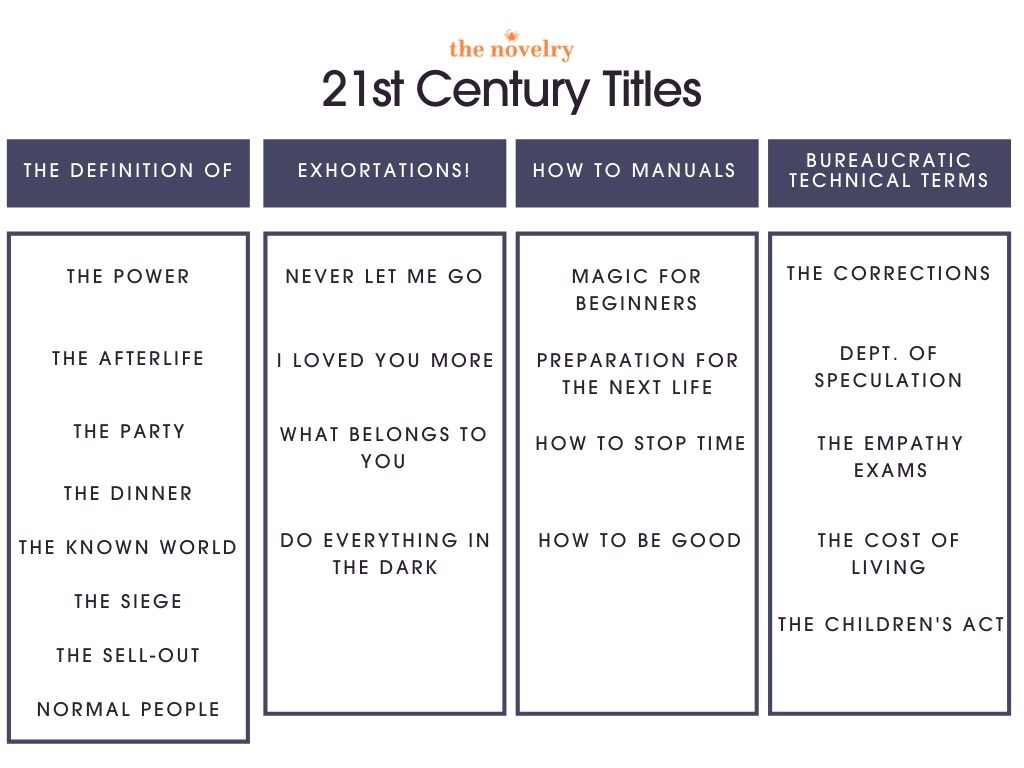 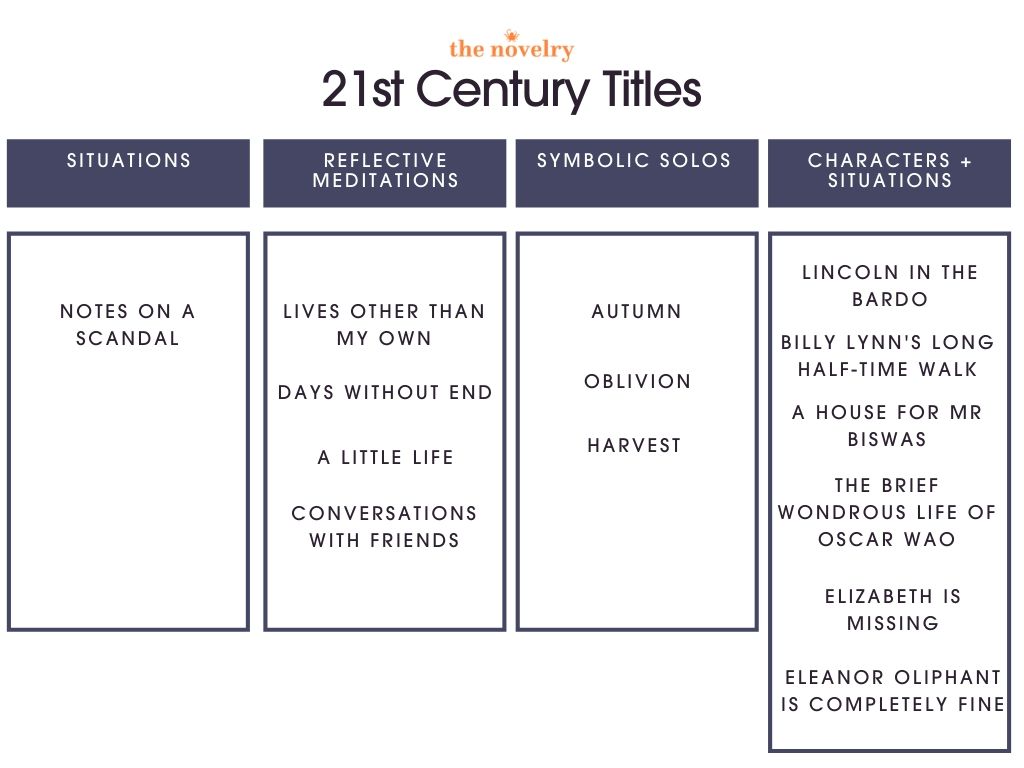 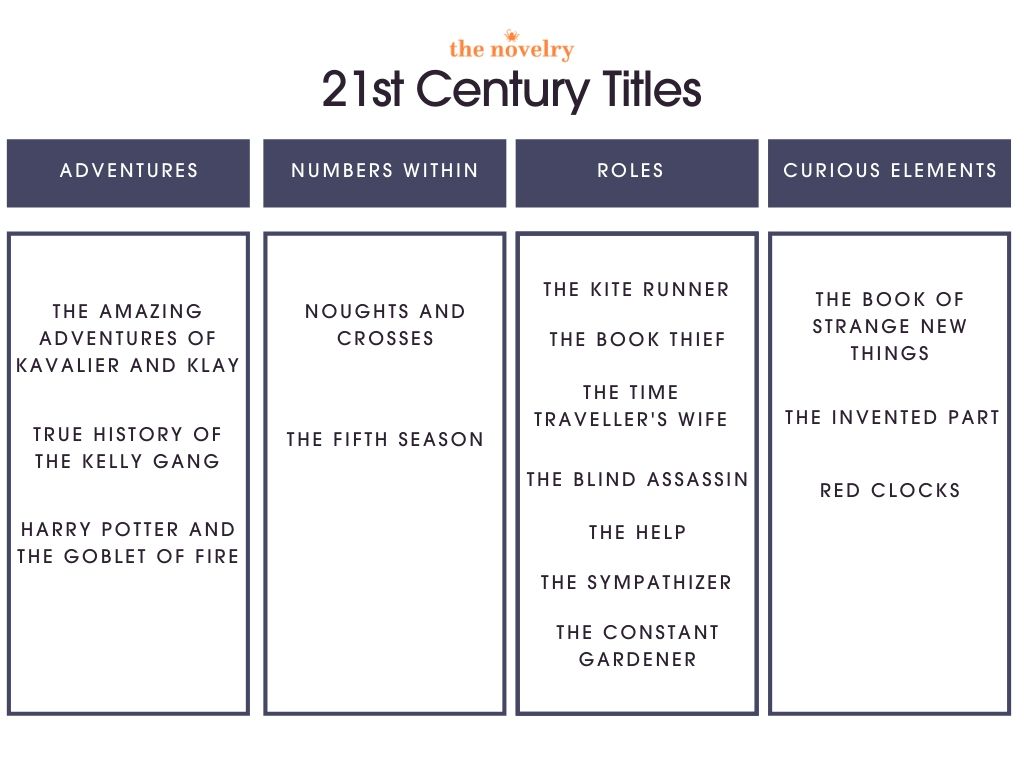 In the literary set, we see the move from Eponyms, the name of the main character towards the addition of emphasis which during an era of population explosion underscores the fact that we are dealing with a particular person and not Everyman, (jack, woman or child.)

This trend is taken up with gusto a floor down from the penthouse in the thronging halls of the book store.

Names are not enough on their own, but must be given context or purpose - Life of Pi, The One and Only Ivan, The Story of Lucy Gault, A Man Called Ove, The Book of Polly, The Papers of Tony Veitch, We Need to Talk About Kevin, Lucy Sullivan Is Getting Married, Eleanor Oliphant is Completely Fine, The Thousand Autumns of Jacob de Zoet, The Disreputable History of Frankie Landau-Banks, Carry On Mr. Bowditch, The Lonely Pilgrimage of Harold Fry, The Strange and Beautiful Sorrows of Ava Lavender ...

Let us go then, you and I, to the book store.

The Bestsellers of the Twenty-First Century.

Notice that these combine accessible appealing elements and are not terribly complex or arcane for the most part. They span the clusters of the previous centuries - name, role, setting, a curious element within the book, and only the last is an exhortation.

We have seen that The Lovely Bones is a literary reference. Jon Green's bestseller's title comes from Julius Caesar by William Shakespeare, "The fault, dear Brutus, is not in our stars, but in ourselves, for we are underlings."

As for the Ten Bestselling Book Titles?

And Then There Were None 100 million (Previously published as a group adventure title.)

What Does This Mean for You and Your Title?

Start by owning your intention.

I'm going to say something about -

Make sure you're in the right genre.

Reassure the reader that your intention (per your title) matches their interests, taking into account the genre you're writing. If it's a thriller, you'll be looking at the Situational titles for example. As we saw with Mr Prus, over 100 years ago, in the Nineteenth Century Titles blog, his success with The Doll was much diminished by a good but inappropriate title. Pore through these blogs for inspiration. You can find them side by side here.

We're here to help you hit the sweet spot from title to THE END with a novel that achieves commercial sales with literary credentials. In other words good stories, well-told.

At The Novelry, we focus on that sweet spot singlemindedly from the moment you join us on one of our online creative writing courses. We aim to deliver you to your promised land of a manuscript and a literary agent within a year. Ready for the year in which you change your routine from Eat, Pray, Love to The Golden Notebook? Join us.