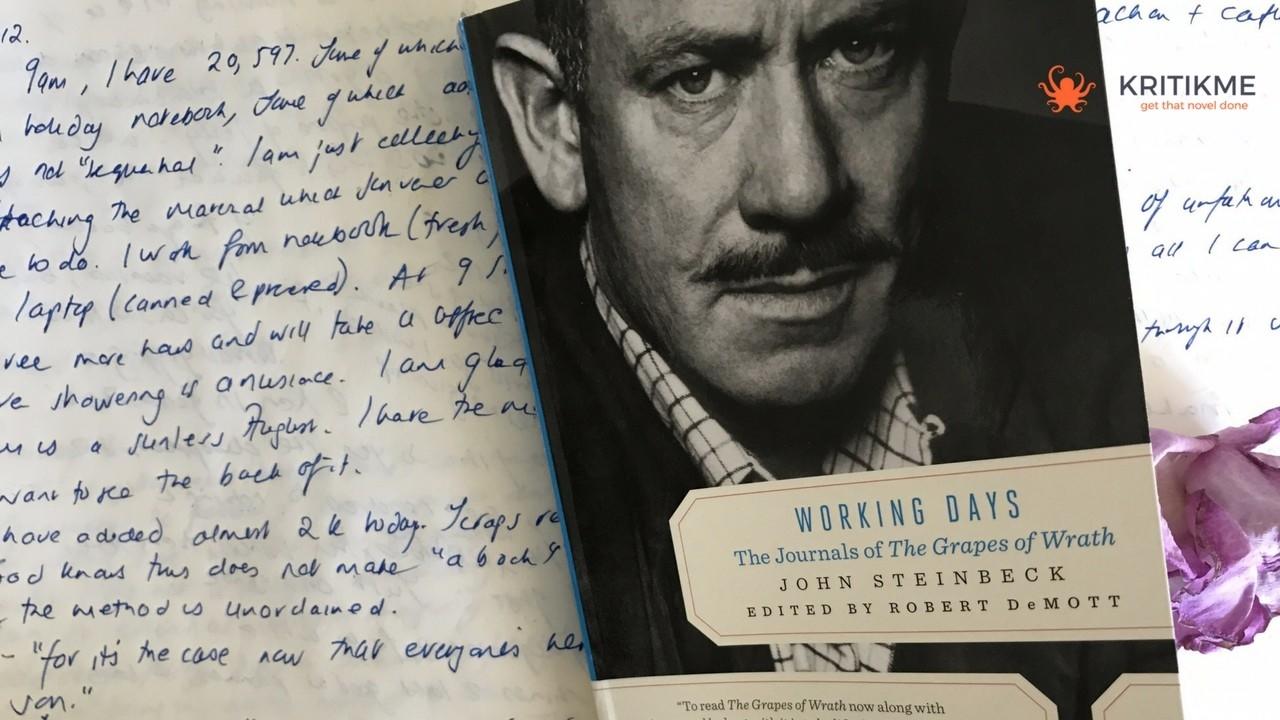 A cautious accounting would reckon on some 3.5 million words of serious writing chalked up between us all at The Novelry so far this year.

From our collaboration as novelists working side by side - shush - beyond The Novelry prescription of discipline and routine-  have popped three things in the last few weeks:

We're hunkering down for another season’s write, beginning September, driving forward first or second drafts, propelled by the knowledge that writers from Steinbeck to Stephen King came to know the virtue of the 90 day write.

We know now that a draft of a novel is not only possible but more possible than not, in ninety days.

I knew my next novel had to be as good as I could make it having been so long in the making, and having gone wrong so many times. I had to get things right this time so I punished myself, and as Hemingway says a writer’s got to take a lot of punishment to write a truly funny book.

This was my thinking process:

The writing part is coming relatively easily after that.I gave up drinking, I started planning the next novel and instead began planning to bring other writers along for the write, to find some good-humoured writer comrades - and I started The Novelry which launched 2nd April 2017 (a canny day behind the fools’ day).

For 90 days I rose at 5am, and wrote my novel for an hour and a half, I worked one of my two day jobs recording my tutorial for the day as video film in the car on the way to work, I came home and spent a couple of hours writing the text of the next day’s lesson, I read all the major texts on the course, I read some of them in a week at the same time, I went to sleep after my reading at midnight, rose again at 5am.

I had no social life. I kept in touch with my writers throughout the day. I did a lot of wondering. I drove rather badly, shouting ‘Siri take a note!’. Those notes are bizarre as Siri is a faithless swine of a servant ‘Happy birthday pineapple’ was not enlightening to me at all.  I ended up in a ‘speed awareness’ course ironically. (It was useful material.)

My writers and I began sharing our working days and practices quite naturally.

I finished the first draft of my novel in six weeks, a lady called Louise was my first member to finish hers also in six weeks, and she told me how she wrote hers long hand. It reminded me....

Longhand is deep play, with a childish innocence and an artistic, entirely constructive quality to it, when typed up you automatically edit it and view it as a reader. The trouble with writing first drafts at a keyboard is that you stray and do other things or you over-fuss and edit with deletions and you can dick around with apostrophes and so on for hours, or do ‘research’ via Google you don’t need to do. Going between longhand and the keyboard thrashes out a lot of ailments. I write longhand in my notebook for beauty, I type up for story. The writing in the notebook is fresh-picked, when it goes into the computer it's canned and preserved.

Janice has a way with working with Scrivener app which was fast and furious and this is a boon to second drafters. So she shared it with a webinar.  Sally had something to add to the Joseph Campbell Hero’s Journey structure and directed us to Maureen Murdock’s book The Heroine’s Journey. That book knocked me for six.

The women amongst us have been ashamed and baffled by how hard we find it to write women. That shame and bafflement has meant that I have never written a novel from a woman’s voice. Once I did and my then agent described it as ‘hysterical’. The slight loathing of the literary classes for books from the female voice is disturbing, and disturbing that we too as writers are guilty of it. The women we write are never bad enough, they do nothing, they can’t make stories happen. Joseph Campbell told Maureen Murdock there would be no female equivalent of The Hero’s Journey. “Women don’t need to make the journey. In the whole mythological journey, the woman is there. All she has to do is realize that she’s the place that people are trying to get to.”

We’ve seen ‘the problem of the bland woman’ is not a singular individual issue, it is a shared problem and now we can start to tackle it. Working one on one with my female writers we look at the possibilities of agency and ‘being bad’ for women narrators without necessarily being victims.

I'd looked during the writing of the course at how Coetzee wrote Disgrace looking at the changes between his 19 drafts as part of the work for the 90 day course, and now I’m reading ‘Working Days’ an account of Steinbeck’s own write in 100 days of The Grapes of Wrath and it’s a singular exposition of the doubt and will and the interplay (or motion sickness) between creativity and self-criticism. Both are necessary, but when you work along you just feel sick, when you write alongside others in a safe warm place like The Novelry you begin to see the purpose of both and how they dovetail and you start to accept them.

I could see by August how for a novel to be great, there must be an alignment of these stars:

The first emerges at the end of the first draft, don’t go looking behind your sofa cushions for it if you’re starting to write, just start to write. The course gets you sturdy, stable and well read. You’re hurt, we’re all hurt, but you’ll come to see why you need that and how to handle yourself with the deep play encouraged in the first draft Novel in 90 and how to keep an eye on it with journalling and be tender to yourself for a change. As for the fifth element, well we are working on that at the membership side of the site by encouraging big-hearted professionals on board to work alongside us in the same collaborative way we work at The Novelry and this week a literary agent, a Costa awards judge and a Whitbread prize-winning novelist joined the team.

If you have self-doubt when you write, then know that it’s a natural part of writing, you need it, it’s what will make your writing better.

‘My many weaknesses are beginning to show their heads. I simply must get this thing out of my system. I’m not a writer. I’ve been fooling myself and other people. I wish I were. The success will ruin me as sure as hell. It probably won’t last and that will be all right. I’ll try to go on with work now. Just a stint every day does it. I keep forgetting.’ (‘Working Days'  John Steinbeck.)

What you’re doing is unique and important and difficult and possible, but you are not alone.